Although all infectious agents in humans are parasites, by convention, parasitic diseases are defined as those caused by protozoa or helminths.
The old classification, in which a single phylum of protozoa encompassed all unicellular eukaryotic microorganisms, is no longer valid because of new ultrastructural and molecular taxonomic information.

For instance, Giardia lamblia (see the image below) has been shown to lack mitochondria and shown to contain ribosomal RNA sequences that resemble bacteria. These protozoa have been proposed to represent an evolutionary transition between prokaryotic and eukaryotic microorganisms. Both Giardia and Microsporidia (which also shares similarities with bacteria) have been reclassified as Archezoa, a term that reflects their evolutionary transitional nature. 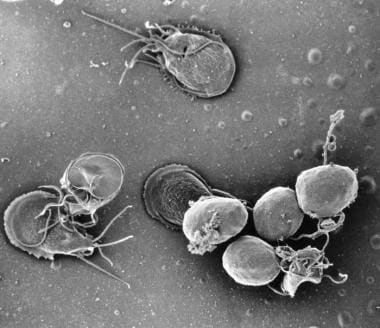 This is a scanning electron micrograph (SEM) of an in vitro Giardia lamblia culture. This photograph contains both trophozoites and a cluster of maturing cysts (bottom right). At far left, the 2 trophozoite-staged organisms are positionally situated opposite to one another, with the farthest left G lamblia displaying its dorsal, or upper surface, and the protozoan to its immediate right, its ventral, or bottom surface.

Clinicians can best classify unicellular eukaryotic microorganisms based on mode of transmission.

The classification of representative protozoa according to modes of transmission is as follows:

Toxoplasma is the only pathogenic fecal-oral transmitted protozoa that has not been associated with gastroenteritis.

Among all intestinal protozoa, those listed in Table 1 have been confirmed to cause GI disease. Others, such as Trichomonas hominis (in infants) and Entamoeba polecki (associated with pigs), have rarely been associated with diarrheal disease and are not discussed in this article.