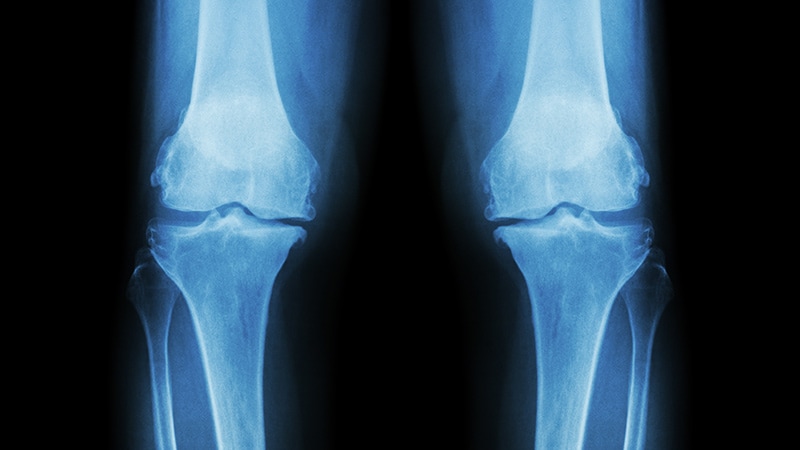 Hawker, who is the chair of the Task Force Steering Committee, noted that classification criteria are needed for several reasons, such as “to advance OA therapeutics and [the] earlier identification of people with knee OA who can benefit from existing treatments.”

Moreover, they are needed so that people with knee OA can “be poised and ready to receive available therapies once we develop them,” said Hawker, professor of medicine at the University of Toronto and a senior clinician-scientist in the Women’s College Research Institute at Women’s College Hospital in Toronto.

Reasoning for Looking at Early OA

“Osteoarthritis is a very serious disease with a growing population burden,” Hawker reminded delegates at the congress. Yet despite “amazing advances” in the understanding of the pathophysiology of disease and several potential druggable targets being identified, “we still have no safe and effective interventions to prevent or slow the progression of the disease.”

“Why have all the DMOADs [disease-modifying osteoarthritis drugs] failed?” she questioned.

One hypothesis is that it’s down to the heterogeneity of OA. “We’ve been plugging people with different kinds or phenotypes of OA into the same clinical trials, and we need to better match OA phenotypes with appropriate treatment,” Hawker said.

Also, “structural changes on imaging, and the symptoms that characterize the disease of function, pain, stiffness, etc., are not super well correlated. It may be that any attempts at structure modification alone won’t adequately improve clinical symptoms.”

Perhaps most importantly, however, “we’re treating people way too late in the course of their disease,” Hawker said. “When we keep putting people with Kellgren and Lawrence [grade] 2 or 3 into clinical trials, it may be that we there’s nothing that we’re going to be able to do that’s really going to make a difference.”

The reason for looking at early-stage OA specifically is that current knee OA classification criteria were developed nearly 40 years ago and were looking at a later stage of disease, mainly differentiating OA from other types of inflammatory arthritis, notably rheumatoid arthritis (RA).

The aim of the OARSI Early OA Task Force is thus to develop, refine, and validate classification criteria that will not only help identify people with early-stage OA who can then be entered into clinical trials of new therapies but also define a population that can be used in preclinical and prognostic work.

“The task force decided to start with early-stage knee OA due to the highest burden and the focus of most clinical trials,” steering committee member Martin Englund, MD, PhD, observed during the discussion.

“When we see how that goes, we may consider early hip OA,” said Englund, of Lund University and Skåne University Hospital in Sweden.

Hawker added that the task force felt that lumping hip and knee OA together would complicate matters because they thought that the classification criteria will likely look very different from each other.

“But the good news is we think that if we can identify early knee OA, we will likely also identify people with at least hand OA,” she said.

The OARSI Task Force initiative will build on the early OA work by Stefan Lohmander, MD, PhD, and Frank Luyten, MD, PhD, who were part of a consensus panel that proposed draft classification criteria a few years ago. Those criteria, derived from a consensus workshop that had included basic scientists, physician-scientists, rheumatologists, orthopedic surgeons, and physiotherapists, identified three main areas of importance: Patient symptoms such as pain and function, the presence of crepitus or tender joints on clinical examination, and having a low Kellgren and Lawrence grade (0 or 1).

Lohmander remains heavily involved, heading up the advisory committee, with many other ad hoc committees likely to be set up during the project.

“We had over 70 people in the OARSI community volunteering to participate in some way, shape, or form,” Hawker said. All will be needed, she said, as there will be a lot of work to do. The starting point is people with undifferentiated knee symptoms, identifying the factors that increase or decrease the likelihood of having early-stage OA. Once a population has been found, the outcomes for prevention need to be defined.

A systematic search of the available literature has started and full-text review of more than 200 papers is in progress. The challenge ahead is to define what the ‘anchor question’ will be. That is, what question should be asked in order to determine whether a patient fulfills the criteria?

Hawker noted that when the American College of Rheumatology developed the RA classification criteria, the anchor question had been around whether methotrexate should be prescribed.

“We don’t have a ‘methotrexate’ in osteoarthritis, and it’s pretty low risk to start weight management or physical activity or even prescribe a topical anti-inflammatory,” she said. “So, we’re still trying to work out exactly how we create our anchor.”

It’s likely that the anchor question will be based on expert opinion rather than hard data. Perhaps it will focus on the chances that a patient’s symptoms will become persistent with loss of function or that they will develop established OA. It could perhaps be around the initiation of a novel DMOAD, if one proved effective enough to be used.

“We have many, many, many, questions!” Hawker said. One of the important ones is deciding what exactly should be prevented. Symptoms? Structural damage?

“I think a combination of symptoms and loss of function are probably what we want to prevent. But again, we’re going to have to define that very clearly. This is going to take us quite a bit of time.”

It’s likely to be a two-stage process: “First we define what is early stage OA, and then we identify those who are at the highest risk of rapid progression so that we can target those individuals for clinical trials.”

Hawker and Englund had no conflicts of interest to disclose.