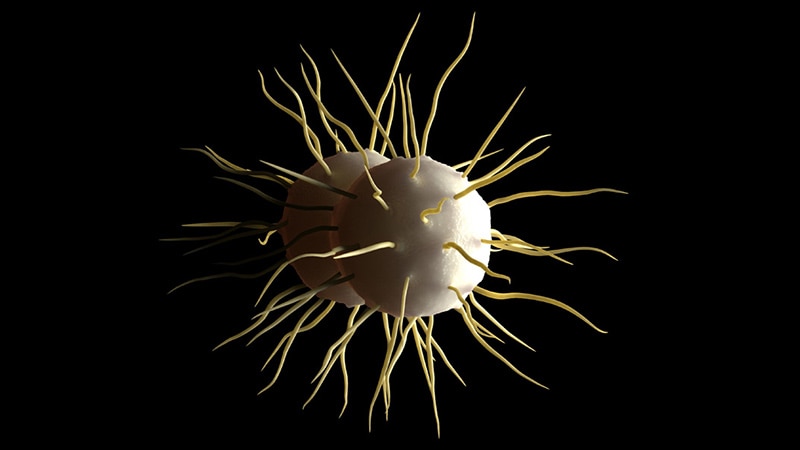 A widely approved vaccine for meningitis may provide up to 40% protection against gonorrhea in young adults and adolescents, according to new research. This moderate efficacy paired with a targeted risk-based approach could reduce cases as well as lead to healthcare savings over 10 years, an additional modeling study showed.

The results — in three linked papers — were published April 12 in The Lancet Infectious Diseases.

Gonorrhea, caused by the bacterium Neisseria gonorrhoeae, is the second most commonly reported sexually transmitted infection in the United States, according to the Centers for Disease Control and Prevention. Globally, the World Health Organization estimates that there were 82.4 million new cases in people aged 15 to 49 in 2020. At the same time, it is becoming more difficult to treat the infection because of the increasing prevalence of drug-resistant strains of N gonorrhoeae.

“New approaches, such as vaccination, are needed as long-term strategies to prevent gonorrhea and address the emerging threat of antimicrobial resistance,” Winston Abara, MD, PhD, Division of STD Prevention, Centers for Disease Control and Prevention, and colleagues wrote.

While there is currently no vaccine for gonorrhea, observational studies have found an association between a meningococcal serogroup B vaccine and reduced gonorrhea cases. One study in New Zealand found that people vaccinated with the MeNZB vaccine, which was produced to control an outbreak of meningococcal disease in the country, were 31% less likely to contract gonorrhea.

This cross-reactivity comes about because Neisseria meningitidis, the bacterium that can cause meningitis, is closely related to N gonorrhoeae, Joseph Alex Duncan, MD, PhD, associate professor of medicine, Division of Infectious Diseases, University of North Carolina School of Medicine, Chapel Hill, told Medscape Medical News. He was not involved with the research. The thought is that “a large proportion of the proteins that are in the vaccine also recognize proteins from Neisseria gonorrhea because the bacteria are so similar at the genetic level,” he said.

To see if this association was still found for the four-component serogroup B meningococcal vaccine (MenB-4C), which is now widely available, Abara and colleagues looked through health records to identify laboratory-confirmed gonorrhea and chlamydia infections in adolescents and young adults in New York City and Philadelphia. All individuals included in the analysis were age 16-23 and all infections occurred between January 1, 2016, and December 31, 2018. These infections were then linked to vaccination records to determine individuals’ MenB-4C vaccination status. Complete vaccination was defined as two MenB-4C doses, delivered 30-180 days apart.

“The findings of our study add to the body of evidence that demonstrates that the MenB-4C may offer cross-protection against Neisseria gonorrhoeae and it supports feasibility of an effective gonococcal vaccine with implications for gonorrhea prevention and control,” Abara told Medscape Medical News.

A second study conducted in South Australia looked at the effectiveness of the MenB-4C vaccine against meningitis and gonorrhea as part of a vaccination program. Using infection data from the Government of South Australia and vaccination records from the Australian Immunization Register, researchers identified individuals born between February 1, 1998, and February 1, 2005, with a documented gonorrhea or chlamydia infection between February 1, 2019, and January 31, 2021. Individuals with chlamydia served as the controls to account for similar sexual behavioral risks.

While these findings are “confirmatory” because they showed results similar to those in previous observational studies, they are still exciting, Duncan said. “Up until now, we really haven’t had any real progress in knowing what type of immune responses could actually be protective from the disease,” he said. “These observational studies have really reinvigorated the Neisseria gonorrhea vaccine research community.”

A vaccine with moderate efficacy — like the protection demonstrated in both studies — could lead to a significant reduction in cases, he noted. A 2015 Australian modeling study estimated that a nonwaning vaccine with 20% efficacy could reduce cases by 40% over 20 years. Focusing on vaccinating higher-risk groups could also have an “outsize impact,” said Jeanne Marrazzo, MD, director, Division of Infectious Diseases, UAB Medicine, Birmingham, Alabama, in an interview with Medscape Medical News. In the third study published in The Lancet, researchers estimated the possible reduction of cases and the potential healthcare cost savings in England in a vaccination effort focusing on men who have sex with men (MSM) at high risk for gonorrhea infection. They predicted that a vaccine with 31% efficacy could prevent 110,200 cases in MSM and save about £8 million ($10.4 million) over 10 years.

Both Duncan and Marrazzo agreed that clinical trials are needed to tease out whether the decrease in gonorrhea cases is due to the MenB-4C vaccine or the association is incidental. There are two ongoing clinical trials, one in Australia and one in the United States. Marrazzo leads the US multicenter study, which also has two locations in Bangkok, Thailand. The trial will also look at whether vaccination protection varies by the location of gonococcal infection: urethra, rectum, cervix, or pharynx. The two new observational studies did not distinguish the different sites of infection.

Marrazzo’s trial has enrolled almost 500 individuals so far, with the goal of enrolling over 2000 participants in total. She hopes to see results by late 2023. “It’s a pretty ambitious effort, but I’m hoping it will give us not only a definitive answer in terms of reduction in infection by anatomic site,” she said, but “also give us a lot of information about how the immune response works to protect you from getting gonorrhea if you do get the vaccine.”