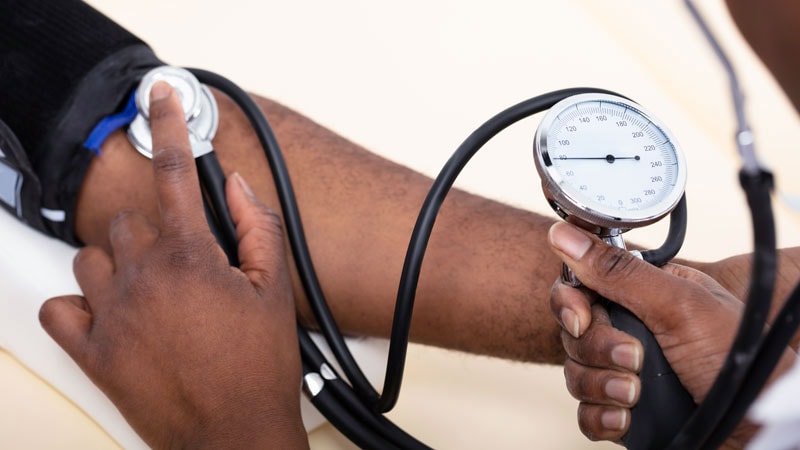 This article was originally published in Spanish on Medscape.

BUENOS AIRES, Argentina — An innovation group from the HEARTS in the Americas Initiative of the Pan American Health Organization (PAHO) has defined eight key actions that must be adopted at a primary care level to improve the coverage and control of blood pressure in the region and worldwide. The proposals range from increasing the accuracy of blood pressure measurement and establishing standardized treatment protocols to accepting prescriptions delegated by nurses or allowing drug prescriptions to be refilled every 3 months for patients whose symptoms have been stabilized. These actions were identified from a review of the evidence and were published in The Lancet Regional Health Americas.

“These are key actions for a complex problem,” Andrés Rosende, MD, an Argentinian cardiologist and PAHO international consultant for the HEARTS in the Americas Initiative, told Medscape Spanish Edition. “We know how to deal with it, but there is an implementation gap between what is known and what happens, despite the fact that high blood pressure affects more than 40% of adults and is the main risk factor that contributes to the most frequent cause of death. It’s a devastating problem in social and economic terms.”

“Most of the time, doctors attribute the lack of control of blood pressure or diabetes to the patients themselves, because they don’t take the medication or don’t come to appointments,” Pedro Orduñez, PhD, PAHO regional advisor for the prevention and control of cardiovascular diseases and leader of the HEARTS Initiative, told Medscape Spanish Edition. The HEARTS Initiative is already being implemented in more than 1400 health centers in 22 countries in the region.

“But what we have increasingly learned is that most of the barriers are created by the care systems. It’s not a case of doctors knowing how to treat hypertension if there is no system that creates an appropriate ecosystem that serves as an incentive to do things well,” said Orduñez. He said that countries that clearly identify these eight drivers “can change the way things are done and improve the quality of care for millions of people, without the need to invent any new drugs.”

The article’s lead author, Jeffrey Brettler, MD, an internal medicine specialist at the Kaiser Permanente Southern California Permanente Medical Group in Los Angeles, acknowledged that controlling high blood pressure is a challenge in all countries, regardless of income level.

“However, we have the tools and we know how to do it. So, the next step in moving forward with the control is to understand what the key drivers are, focus on them, take them to health centers and doctors, and measure them. I am sure that the situation will improve,” Brettler said in a PAHO webinar last November.

In the new article, the authors from 12 countries defined eight drivers, or key actions, in five domains (diagnosis, treatment, continuity of care and follow-up, delivery system, and system for performance evaluation) “whose implementation can mark a before and an after in the coverage and control of high blood pressure,” said Rosende.

“The drivers were based on the analysis of systematic reviews of the new World Health Organization [WHO] pharmacological treatment guideline for arterial hypertension and evidence of successful programs in the world. The drivers are not based on opinions, they are based on hard science,” said Orduñez.

In addition, Brettler and colleagues proposed two interconnected scoring systems that health centers, or even primary care providers, can use to assess the maturity or progress in the implementation of these actions. Another proposed system assesses performance by analyzing the following three results: coverage of the program, degree of control in all patients with hypertension, and degree of control in only patients at high cardiovascular risk.

“The best police officer or auditor is yourself,” said Orduñez. “At health centers, there must be a continuous quality improvement policy, and this must be an honest and real vision to improve the practice and to feel proud. I would ask primary care physicians: how many patients do you have, how many of them have hypertension, how many have well-controlled blood pressure? And if they answer that they never thought about it or that they don’t know, we’re in trouble. If put into practice, these eight drivers are going to help improve care.”

Cardiovascular risk stratification for all patients with hypertension will allow “guiding the blood pressure goal and the frequency of monitoring,” as well as indicating a combination of antihypertensive drugs, statins, and aspirin (as needed) in those at higher risk. A practical tool for this estimation in the clinic or office is a new mobile application that has already been downloaded more than 60,000 times. The main pillar of this app, which was presented in the Pan American Journal of Public Health, is the risk calculator. It is based on WHO risk tables that have been recalibrated and validated for the population of the different regions, including six countries of the Americas.

“The application has a more pragmatic approach: it adjusts the risk according to the selected country, it shows the standardized treatment protocol defined by that country, and it reminds the health worker that in certain patients (for example, those with diabetes or a history of heart attack), the risk does not need to be calculated, because that risk should already be considered high,” added Rosende, one of the co-authors. The application is free and can be downloaded from this link.

According to the authors, the lack of standardized treatment protocols may contribute to the large gap between guideline recommendations for drug use and current practice, resulting in patients with poorly controlled hypertension. The recommendations are to implement these protocols with specific drugs and doses and, as far as possible, to use combinations of drugs at fixed doses to increase therapeutic compliance.

“This is one of the biggest challenges: that countries have fixed-dose combinations of molecules available, such as telmisartan/amlodipine, whose price is not three or four times higher than that of the drugs separately,” said Rosende.

“Standardized protocols reduce unwarranted clinical variability and benefit the people who need it most,” stressed Orduñez.

Therapeutic inertia, or resistance to starting or escalating treatment when the stated goals are not achieved, could be the most significant barrier to achieving adequate blood pressure control, the authors note. “It has several components at the level of the patient, the doctor, and the health system,” said Rosende. They note that current protocols emphasize the need to start with combination therapy from diagnosis and not spend time recommending hygienic-dietary measures as a step prior to medication, which really must be added as an ongoing process throughout the treatment.

The formal recommendations are to start pharmacologic treatment immediately after the diagnosis of arterial hypertension is confirmed and “to add or intensify the medication according to the standard protocol if the arterial pressure is ≥140/90 mm Hg or the systolic pressure is >130 mm Hg for high-risk patients.”

Delays in treatment intensification and follow-up after that intensification have been associated with an increased risk of cardiovascular events or deaths, the authors note. For this reason, they recommend monitoring elevated blood pressure within 2 to 4 weeks if uncontrolled, within 6 months for all patients with stable and well-controlled hypertension, and within 3 months for all patients with hypertension who are at high risk of cardiovascular disease, including those with diabetes or chronic kidney disease.

Care that relies solely on physicians “exacerbates issues of timely access, inefficiency, inequity, and cost,” according to the authors. They instead propose an approach to care that expands the skills of nurses and other trained healthcare workers, both in taking blood pressure and in indicating medication or dose changes when certain objectives are not achieved, always “under supervision and guided by protocols.”

This is called “delegated prescriptive practice,” Rosende told Medscape Spanish Edition. “We do it daily in critical care with very serious patients who have a 50% mortality rate. We indicate, for example, that the nursing staff perform glycemic control and corrections with insulin according to a table. Why not do it with outpatients and with extremely safe drugs?” Rosende admitted, however, that this proposal may generate resistance.

“We still have a lot of work to do to ensure that therapeutic intensification by nonmedical professionals is allowed in our countries,” co-author Yamilé Valdés González, MD, head of teaching and research at the General Calixto García University Hospital in Havana, Cuba, and member of the National Advisory Commission for the Diagnosis and Treatment of Arterial Hypertension, stated in last November’s webinar chat.

Low drug availability, occasional shortages, or the trips patients must take to pick up drugs are potential barriers to adherence, so the authors propose implementing standard 3-month refill intervals for all drug prescriptions for blood pressure, which is applicable when the patient’s blood pressure is stabilized, said Rosende.

Among the rationales for that recommendation, the authors cite a systematic review of 13 studies published in 2018 that found moderate evidence of increased adherence when the prescription duration is 2 to 4 months, compared with a duration of 28 days.

Can blood pressure be controlled if it is not measured? Can a process be improved if the evolution of its results is not measured and if this information is not transmitted to the actors that drive it? The last recommendation points to an effective continuous quality improvement strategy: “Implementing a monthly performance evaluation and feedback program,” the frequency of which could be quarterly (at most) for smaller facilities. The experience of Kaiser Permanente Southern California in the United States has been one of the inspirations: blood pressure control among members increased from 54% to 86% between 2004 and 2010. Extensive feedback was essential to overcoming the therapeutic inertia of physicians, including additional education for low achievers. Orduñez pointed out an additional component: “Patients have the right to know the quality of health organizations.”

Members of the HEARTS in the Americas Initiative are optimistic. “The problem is more visible, and we are making concrete progress that will surely show an improvement in blood pressure coverage and control in the short term,” said Rosende.

Orduñez considered that saying which of the eight drivers is the most relevant is “tricky,” because it is a set of actions that must complement each other. “You are Argentinian: what is the most important thing about a barbecue? The quality of the meat, the cook, the grill, the charcoal, the wine, the salads? All of that!”

Miguel Schiavone, MD, director of the Argentine Council of Arterial Hypertension of the Argentine Society of Cardiology (SAC) and head of arterial hypertension at the British Hospital in Buenos Aires, told Medscape Spanish Edition that the HEARTS project organizes and tabulates what the scientific societies have been doing, with the advantage that it is protected by PAHO and facilitates the commitment of the states.

Likewise, he pointed out that the adequacy or practical feasibility of some key proposed actions can be discussed. The proposals in question include having validated electronic blood pressure monitors at all health centers in the country or region, having nonmedical professionals intensify treatments (some hold that hypertension does not lend itself to algorithms, and there are many external factors to consider), and having physicians or facilities keep accurate statistics of the large volume of patients they serve, “although it would be ideal,” said Schiavone.

“But HEARTS is pushing to change the state of play, and that is very positive. We have to do something. And even if improvements of 3% or 5% are achieved in the next 5 years, that is a lot due to the high prevalence of arterial hypertension,” concluded the specialist.

Orduñez, Rosende, and Schiavone have disclosed no relevant financial relationshps.