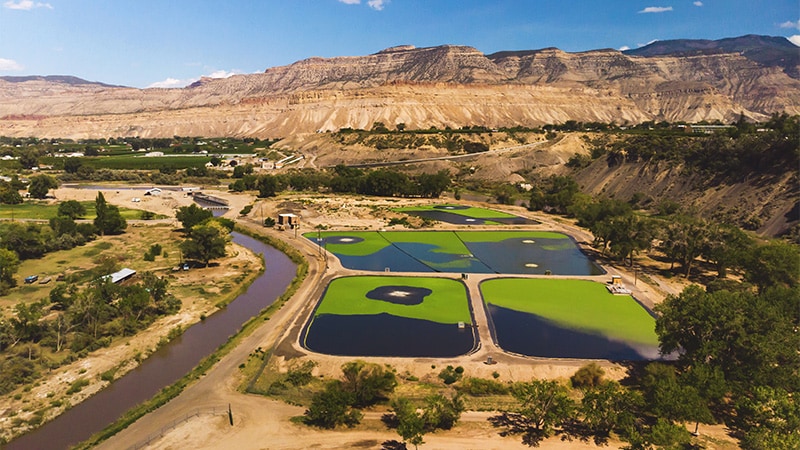 On a Sunday morning in March 2020, right at the start of the pandemic, an article in Popular Mechanics caught engineer Pieter Van Ry’s eye. It had a catchy title: “How Poop Offers Hints About the Spread of Coronavirus.”

“At the end of that article, it said, ‘If you have a wastewater facility and you’re interested in participating in this study, please contact us,'” he said.

As a matter of fact, Van Ry did have a wastewater facility. He is the director of South Platte Renew, a wastewater treatment plant in Englewood, Colorado, that serves 300,000 people. He filled out the form, and South Platte joined the first facilities in the nation to start testing wastewater for covid-19.

Now, as the federal government expands its wastewater testing effort, Colorado has begun to extend its surveillance project to the entire state. The state’s public health agency is now working with 47 wastewater utilities that serve about 60% of Colorado’s population.

People infected with SARS-CoV-2, the virus that causes covid-19, shed viral RNA — genetic material from the virus — in their feces. In wastewater tests, scientists use that RNA to tell what’s there.Rachel Jervis, an epidemiologist with the Colorado Department of Public Health and Environment, noted that wastewater testing can offer an early warning sign about where covid spread is highest. “We found that up to 50% of people will shed covid virus in their stool regardless of whether or not they have symptoms,” she said.

The state compiles the data from a variety of sites on a public dashboard. It also shares its numbers with the Centers for Disease Control and Prevention. About $9.4 million in federal funds is paying for the state’s wastewater testing project from January 2021 through at least July 2023. The total includes personnel, supplies, equipment, and contracts.

From the start, lab results from the South Platte plant’s samples showed exactly what the virus was doing, Van Ry said: “It was spreading rapidly through the community.” He showed a slide of data from samples. All the surges were clear: alpha, delta, and then a spectacular spike driven by the omicron variant in early 2022.

The technique caught on around Colorado and the country. Colorado Mesa University, in collaboration with the Broad Institute of MIT and Harvard, was another early adopter in the state.

Emily Travanty, director of the state lab in Denver, said Colorado’s public health agency started testing wastewater five years ago for foodborne illnesses like salmonella. “We were able to pivot that expertise toward covid-19 as the pandemic emerged, and build upon that expertise within the laboratory,” she said.

While the approach is groundbreaking in the U.S., it’s been used overseas for decades in polio eradication efforts. “They use it essentially the same way we do — to look for communities where polio is circulating and then use that as a trigger for additional clinical surveillance in those communities,” Amy Kirby, CDC microbiologist and team lead for the National Wastewater Surveillance System, said during a recent conference call.

In fall 2020, during the first weeks of the school year, a response team at the University of Denver started pulling samples from pipes on campus.

Corinne Lengsfeld, a mechanical engineer who oversees the campus’s saliva testing lab, said a wastewater sample taken at one dorm early in the semester showed high concentrations of the virus. “It was a million virus units per one liter,” she said. “Holy Toledo!”

Without that, Lengsfeld said, perhaps 100 more students in the dorm of 300 might have caught it. “It works,” she said. “It definitely is a case study, I think, of exactly how to control spread.”

Jude Bayham, an assistant professor at Colorado State University and the Colorado School of Public Health, said that as overall covid trends improve and Colorado pivots to the next phase — and maybe scales down other testing — still-evolving wastewater analysis promises to step up. “Wastewater surveillance is a relatively cheap alternative that can provide a lot of information,” said Bayham, who is also a member of the state’s covid modeling team.

“We are really excited about this new tool,” said state epidemiologist Dr. Rachel Herlihy. “It will help us understand regional differences. It’s also been incredibly useful for us in understanding the emergence of new variants.”

“We’re still really figuring out how to best put it to use,” Herlihy added.

Kirby, of the National Wastewater Surveillance System team, said the CDC anticipates using the system to monitor infectious diseases, as well as other public health issues, like substance use disorders.

“One of the strengths of wastewater surveillance is that it is very flexible,” Kirby said. “So once we have built this infrastructure to collect the samples, get them to a laboratory, get the data to CDC, we can add tests for new pathogens fairly quickly.”

Should a new pathogen of interest pop up, she said, they could ramp up this system within a few weeks to start gathering community-level data on it.

This story is part of a partnership that includes Colorado Public Radio, NPR and KHN.