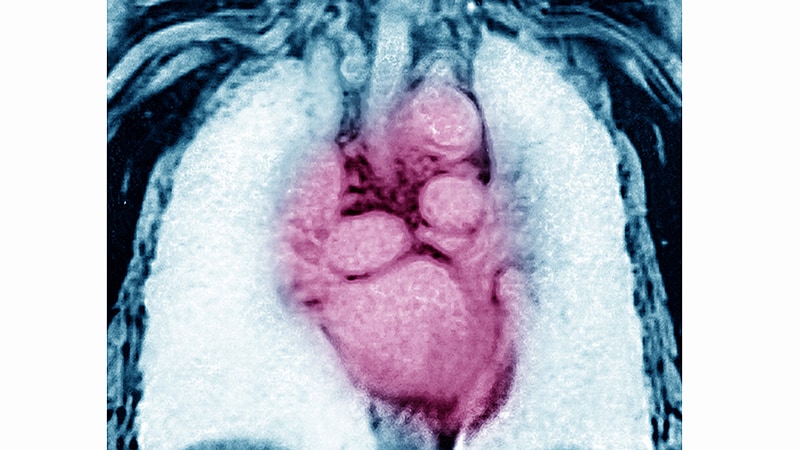 Approximately 6.2 million people in the United States had heart failure (HF) between 2013 and 2016, and prevalence of the condition continues to increase over time as the population ages. Ischemic heart disease is one of the leading contributors to HF. Thanks to technologic advances in cardiac imaging, multimodality studies provide insight into the pathophysiology of both ischemic and nonischemic cardiomyopathy. In this overview based on the latest research, we discuss the integral role of comprehensive imaging studies, particularly transthoracic echocardiography (TTE) and cardiac magnetic resonance imaging (CMR), in differentiating potential causes of HF and diagnosing various cardiomyopathies.

TTE and CMR: The Basics

Recent advances in three-dimensional (3D) TTE allow automated detection of endomyocardial borders for accurate assessment of ventricular volumes and ejection fraction. However, this modality can be technically limited by temporal resolution, beat-to-beat variability, and stitching artifact. Because 3D TTE is superior to 2D assessment, it is now more widely used in clinical practice.

Owing to its high-spatial resolution and 3D tomography, CMR provides superior myocardial border definition and volumetric analysis, accurate determination of regional wall thickness and myocardial mass, and sensitive detection of WMA. CMR is considered the gold standard for assessing chamber volumes and LV and right ventricular (RV) ejection fraction. The principal utility of CMR and its advantage over echocardiography for cardiomyopathy is its use of late gadolinium enhancement (LGE), which visualizes myocardial tissue and detects scar, fibrosis, or infiltration.

Used in LGE assessment, gadolinium is an extracellular chelating agent that permeates the interstitial space of both normal and abnormal myocardium. CMR identifies areas of increased interstitial space where gadolinium is retained (eg, areas of myocardial infarction, acute edema/inflammation due to capillary leak, myocardial fibrosis/scar, or amyloid protein infiltration). The pattern of LGE can provide clues about the etiology of cardiomyopathy.

Although LGE permits macroscopic comparison of normal and abnormal tissue, it is not as sensitive to ultrastructural changes at the microscopic level. Parametric T1 and T2 mapping sequences can be used for evaluation of diffuse, interstitial myocardial fibrosis that is not detected by LGE imaging. T1 and T2 mapping better characterize myocardial tissue by identifying areas of edema (T2), inflammation, and more diffuse fibrosis (T1), which may aid in diagnosing myocarditis without LGE, amyloidosis, hemochromatosis, and Fabry disease.

Contrast-enhanced T1 mapping is mostly used for calculating extracellular volume fraction (ECV) — that is, the ratio of pre- and postcontrast myocardial T1 to that of the ventricular blood compartment T1. Because ECV defines the proportion of a volume of tissue that consists of extracellular matrix or space between myocytes, it is a marker of myocardial tissue remodeling. Further, T2* mapping, another parametric imaging approach, can detect and quantify myocardial iron deposition, primarily to assess iron overload cardiomyopathy. Overall, the addition of CMR to TTE in selected patients offers complementary information and more specific diagnoses.

In patients with ischemic cardiomyopathy, TTE may show segmental areas of systolic dysfunction that are typically localized to a coronary distribution. The use of microbubble contrast agents allows better visualization of endocardial borders and can aid in detecting regional WMA (Figure 1a). TTE with contrast can also detect the thrombi in the left ventricle (Figure 1c).

On CMR, subendocardial or transmural LGE typically presents in a coronary distribution that is most consistent with prior myocardial infarction (Figure 1b and 1d). Areas of substantial LGE distribution are frequently associated with WMA in the cine images (cine MRI are multiple images taken at different phases of the cardiac cycle). The extent of transmural LGE indicated can also assess viability. For example, a study of 1055 patients with coronary artery disease, of whom 201 had regional wall thinning, found that if wall segments supplied by a particular coronary distribution have < 25% of LGE, there is a favorable chance for myocardial recovery with revascularization, whereas > 50% of LGE suggests nonviable myocardium. Myocardial perfusion can be performed using CMR with first-pass gadolinium enhancement. Likewise, stress perfusion to detect flow-limited coronary artery stenosis can be performed through CMR with an infusion of adenosine, dobutamine, or regadenoson.

CMR has high sensitivity and specificity for amyloid heart disease with evidence of diffuse subendocardial or transmural LGE patterns in a noncoronary distribution. Native T1 and ECV are also significantly increased in cardiac amyloidosis, with ECV values typically > 40%. LGE pattern and extent, as well as native T1 and ECV, can have prognostic value.

Technetium-99m pyrophosphate (99mTc-PYP) scintigraphy has high sensitivity and specificity for transthyretin-related amyloidosis (Figure 2b), a previously underrecognized hereditary disease now believed to be a relatively common cause of HF with preserved ejection fraction in older adults. 99mTc-PYP scintigraphy can lead to early diagnosis of transthyretin-related amyloidosis. Future studies will evaluate the role of innovative imaging techniques with 18F-florbetapir PET and hybrid PET/CMR to assess treatment response.

Echocardiographic features of cardiac sarcoidosis (CS) may be variable and include normal findings, increased LV wall thickness, or abnormal systolic function (depending on the stage of disease). TTE can detect focal areas of systolic dysfunction in a noncoronary distribution, as well as thinning of the basal septal wall and aneurysms. LGE patterns in CS are nonspecific and often multifocal and patchy. These areas of systolic dysfunction can involve the basal anteroseptum, inferoseptum, midmyocardium, and subepicardium and be associated with overall increased adverse cardiac events. CMR findings may show increased myocardial signal intensity on T2-weighted images or elevated T2-parametric mapping values that are indicative of myocardial edema.

Because TTE and endomyocardial biopsy have limited roles in detecting CS, complementary CMR and fluorodeoxyglucose-PET, coupled with myocardial perfusion imaging, can be obtained; these studies may guide treatment and assess response to immunomodulatory treatment. Randomized studies, however, are needed to determine the role of advanced imaging in guiding therapy (examples of findings from imaging studies of a patient with CS are shown in Figure 3).

Dilated cardiomyopathy (DCM) is characterized by dilated LV cavity size, LV systolic dysfunction, and normal or thinned LV walls (Figure 4a). A retrospective analysis found that RV systolic dysfunction portends worse prognosis. Further, another study revealed that 31% of patients with DCM had septal mid-wall LGE pattern on CMR, often with a low signal intensity when compared with infarction, which can be associated with risk for ventricular arrhythmias or sudden cardiac death. In addition to its diagnostic capabilities, CMR may also help predict clinical response to cardiac resynchronization therapy.

In hypertrophic cardiomyopathy (HCM), the most common site of hypertrophy is where the basal anterior septum and the contiguous anterior free wall join. Other patterns of LV hypertrophy (LVH) include mid-cavity, concentric, or apical hypertrophy. The apical variant of HCM may be more challenging to detect on TTE (Figure 5a), and CMR can better identify areas of segmental LVH (Figure 5b). Systolic anterior motion of the mitral valve, elongation of the mitral valve leaflets, anterior and apical displacement and hypertrophy of the papillary muscles, mitral regurgitation, and LV outflow tract obstruction can be associated findings in HCM. Myocardial strain imaging may show segmental abnormalities in the areas of hypertrophied myocardium. LGE may be seen in RV insertion points and, more commonly, is visualized as patchy, moderate to high signal intensity areas in the thickest LV regions (Figure 5d). The degree of LGE burden, massive LVH (> 30 mm), presence of LV apical aneurysm, and LV ejection fraction ≤ 50% can help guide risk stratification for implantable cardiac defibrillator to prevent sudden cardiac death.

The hallmark of Fabry disease (a phenocopy of HCM) is concentric LVH with fibrosis of the lateral wall. As the disease progresses, the basal LV lateral segment may become thinned and dysfunctional due to fibrous substitution, causing reduced longitudinal strain. LGE distribution typically involves the midmyocardium of the basal to mid-inferolateral wall. T1 mapping can be diagnostic in Fabry disease owing to the shortening of T1 by sphingolipid deposition, compared with normal range, in distinction to fibrosis or infiltrative patterns, which increase T1.

As reviewed, TTE and CMR are fundamental tools in diagnosing myocardial disease. TTE can detect a wide variety of cardiac pathologies and, for certain types of cardiomyopathies, TTE alone is sufficient to confirm the diagnosis. CMR provides a superior morphologic evaluation and has the unique capacity to characterize myocardial tissue via multiparametric mapping, which offers prognostic implications.

Looking to future directions in cardiac imaging, there are several novel techniques that are being researched. These include diffusion tensor CMR, which has the potential to assess myocardial microstructure disruption by amyloid deposition; emerging technology that uses four-dimensional flow CMR; and hybrid imaging techniques such as CMR/PET. Advanced imaging will continue to play an important role in the evaluation of patients with cardiomyopathies in providing risk stratification along with guidance for clinical management and assessment of treatment response.