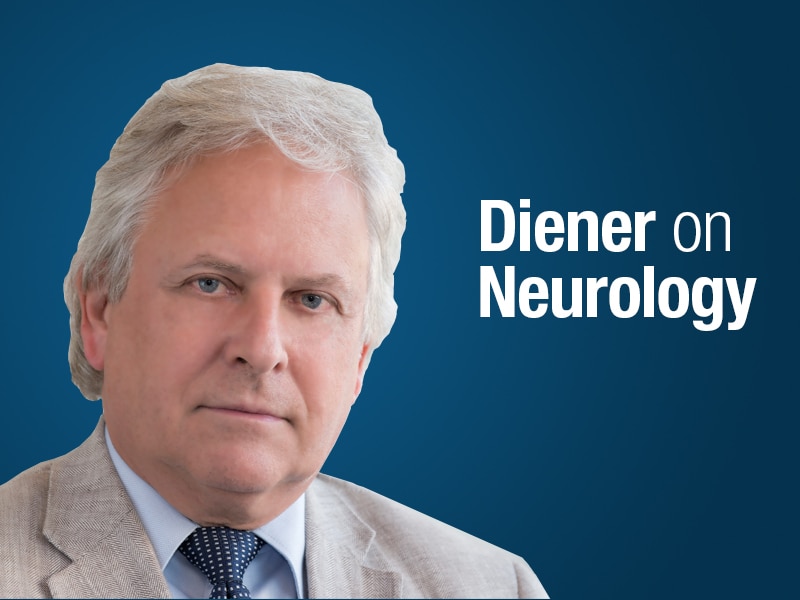 Dear colleagues, I am Christoph Diener from the University of Duisburg-Essen in Germany. With the year ending, I’d like to take you through a month-by-month summary of some of the highlights in neurology papers published in 2021.

The year began with a January publication from the United Kingdom on the treatment of multiple sclerosis (MS) fatigue, a phenomenon observed in 25%-50% of these patients. Investigators behind this crossover study assessed amantadine, modafinil, and methylphenidate; unfortunately, none of these treatments proved superior to placebo.

February saw the arrival of results of a randomized study in early Alzheimer’s disease with donanemab, a monoclonal antibody against beta-amyloid. This study was positive for the primary endpoint of change in the score on the Integrated Alzheimer’s Disease Rating Scale, but the absolute effect of therapy was very small. Therefore, we have to wait for what will hopefully be more positive studies with this treatment.

In March, we had a spectacular paper from a group of German investigators who developed a vaccine against a neoepitope in gliomas. Although this was only a small open-label study, it highlights what is — hopefully — a totally new way to treat gliomas in the future.

In April, the results of the SANAD studies in epilepsy were published. These are very pragmatic open-label trials in which patients are placed on antiepileptic treatment and are followed to see how effective it is and how many patients terminated therapy owing to adverse events.

In May, there was an interesting study from the United States that followed 1.5 million veterans for two decades to look for predictors of Parkinson’s disease. Investigators found that 15 years before onset of the disease, these veterans were more likely to experience gastrointestinal symptoms, such as obstipation; smell disturbances; and genitourinary symptoms, such as sexual dysfunction, urinary dysfunction, and prostate hypertrophy.

These findings might in the future help identify patients at risk for Parkinson’s disease, so they can be included in studies of neuroprotective therapy.

June saw an important analysis of data from the Whitehall II study. Investigators followed 8000 participants for 25 years and found an association between the duration of sleep and the risk for dementia. The risk was increased if people slept less than 6 hours per night, and it was also increased if they slept more than 7-8 hours per night. By the way, a similar association was observed between duration of sleep and the risk for vascular diseases, including myocardial infarction.

In July, there was a study from the Netherlands of 150 patients who received occipital nerve stimulation for the treatment of refractory chronic cluster headache. Although the study was positive, this is a surgical procedure that should only be performed in very experienced neurosurgical centers.

August saw an important study regarding the question of whether disease-modifying therapy in early MS should be aggressive with highly effective drugs, or whether you should start with more mild therapy and then use a stepwise or treatment escalation approach. Investigators compared 2700 patients from Sweden, where a more aggressive approach is usually followed, with 2000 from Denmark, where treatment escalation is performed if mild therapy doesn’t work. They found that the patients in Sweden had a better prognosis, with less disability. This would be, perhaps, an argument to start with more aggressive therapy, although this approach does have more adverse events.

In September, results were published on a study into the increased risk among professional soccer players for neurodegenerative diseases, including dementia, Alzheimer’s disease, and amyotrophic lateral sclerosis. This increased risk was particularly true for defenders and those with longer career duration. This has also been shown in the United States, not only for soccer but also for ice hockey and football.

What are the consequences for amateur sports? I don’t know, but perhaps children up to the age of 14 should not do headers if they play soccer.

October saw a study in 7900 patients from a large MS registry. It clearly showed that if smokers with MS stop smoking, it has a positive impact on disease progression.

Finally, in November, a meta-analysis was published on cases of cerebral sinus venous thrombosis after COVID-19 vaccination. All of these patients were vaccinated with vector vaccines, such as those from AstraZeneca and Johnson & Johnson, and there were basically no cases with BioNTech or Moderna vaccines.

The pathophysiologic mechanism for this complication is the development of antibodies against platelet factor 4, which leads to thrombocytopenia and venous thrombosis. So, if a patient develops headache after vaccination, for example, with AstraZeneca, you should measure thrombocytes in their plasma.

Ladies and gentlemen, in conclusion, 2021 was an exciting year in neurology, which you can see from what is only a small and very subjective selection of important papers. Thank you very much for listening and watching.