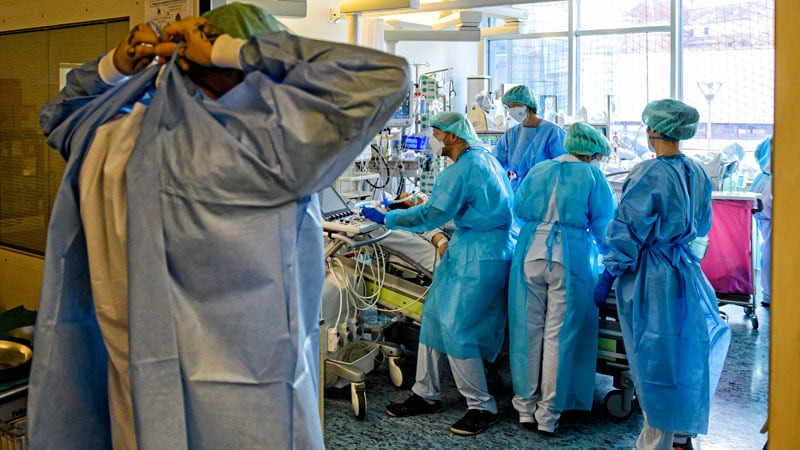 Ahead of the busiest travel days of the year, COVID-19 cases are rising across 40 states and territories, setting the United States up for a rough fifth surge of the pandemic.

“A significant rise in cases just before Thanksgiving is not what we want to be seeing,” said Stephen Kissler, PhD, a postdoctoral researcher and data modeler at the Harvard TH Chan School of Public Health in Boston, Massachusetts.

Kissler said he’d rather see increases in daily cases coming 2 weeks after busy travel periods, as that would mean they could come back down as people returned to their routines.

Seeing big increases in cases ahead of the holidays, he said, “is sort of like adding fuel to an already raging fire.”

Last winter, vaccines hadn’t been rolled out as the nation prepared for Thanksgiving. COVID-19 was burning through family gatherings.

But now that two-thirds of Americans over age 5 are fully vaccinated and booster doses are approved for all adults, will a rise in cases translate, once again, into a strain on our still thinly stretched healthcare system?

Experts say the vaccines are keeping people out of the hospital, which will help. And new antiviral pills are coming that seem to be able to cut a COVID-19 infection off at the knees, at least according to early data. A US Food and Drug Administration panel meets next week to discuss the first application for a pill by Merck.

But experts caution that the coming surge will almost certainly tax hospitals again, especially in areas with lower vaccination rates.

And even states where blood testing shows that significant numbers of people have antibodies after a COVID-19 infection aren’t out of the woods, in part because we still don’t know how long the immunity generated by infection may last.

“It’s hard to know how much risk is out there,” said Jeffrey Shaman, PhD, professor of environmental health sciences at Columbia University’s Mailman School of Public Health in New York City, who has been modeling the trajectory of the pandemic.

“We’re estimating, unfortunately, and we have for many weeks now, that there is an erosion of immunity,” Shaman said. “I think it could get bad. How bad? I’m not sure.”

Ali Mokdad, PhD, a professor of health metrics sciences at the University of Washington’s Institute for Health Metrics and Evaluation in Seattle, agrees.

Because there are so few studies on how long immunity from natural infection lasts, Mokdad and his colleagues are assuming that waning immunity after infection happens at least as quickly as it does after vaccination.

Their model is predicting that the average number of daily cases will peak at around 100,000, with another 100,000 going undetected, and will stay at that level until the end of January, as some states recover from their surges and others pick up steam.

While the number of daily deaths won’t climb to the heights seen during the summer surge, Mokdad said their model is predicting that daily deaths will climb again to about 1200 a day.

The United States has currently recorded 773,000 COVID-19 deaths, so Mokdad is predicting about 120,000 more deaths between now and then.

He said his model shows that more than half of those deaths could be prevented if 95% of Americans wore their masks while in close proximity to strangers.

Currently, only about 36% of Americans are consistently wearing masks, according to surveys. While people are moving around more now, mobility is at prepandemic levels in in some states.

“The rise that you are seeing right now is high mobility and low mask wearing in the United States,” Mokdad said.

The solution, he said, is for all adults to get another dose of vaccine — he doesn’t like calling it a booster.

“Because they’re vaccinated and they have two doses they have a false sense of security that they are protected. We needed to come ahead of it immediately and say you need a third dose, and we were late to do so,” Mokdad said.