Red Eye Is Common, but Can Be Indication of Serious Disease 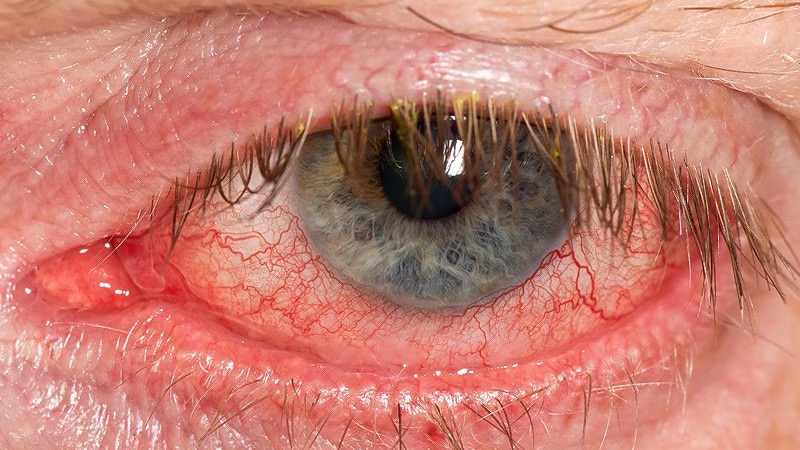 The proper management of red eye, a common affliction seen in emergency departments and doctor’s offices, involves the separation of common, trivial symptoms from less common, but often serious symptoms, Uwe Pleyer, MD, from the Department of Ophthalmology at Charité – Universitätsmedizin Berlin, explained during a press briefing at DOG 2021, the conference of the German Ophthalmological Society .

Conjunctivitis, or pink eye, is detectable in about one-third of COVID-19 patients, according to a 2020 Chinese study. Eye symptoms usually appear in the first 3 days after a person is infected with the SARS-CoV-2 virus, can be the first symptoms a patient experiences, and can be mild. For asymptomatic patients and those with mild infection, the risk for transmission of the SARS-CoV-2 virus through tears is minimal but increases significantly for patients who require intensive care, Pleyer reported.

In addition, red eye has become more common during the pandemic because people’s screen habits have changed and because masks can cause dry eyes by directing breath upward. “Young people are more commonly affected by this, which we did not see very often previously,” he explained. Without adequate therapy — most often artificial tears — red eye can cause significant discomfort but is rarely a threat to sight.

Inflammation of the deeper structures of the eye, particularly the sclera and the iris, is rare but serious. There is often a correlation with autoimmune disorders, and eye symptoms can be the first manifestation of a systemic, potentially life-threatening, disease.

About 40% of patients with scleritis have underlying rheumatologic diseases. And red eye can be an early indication of spondyloarthropathy or ankylosing spondylitis in young men with anterior uveitis (iritis or iridocyclitis), Pleyer said.

In cases of inflammation, consultation with an ophthalmologist or rheumatologist could lead to the early initiation of therapy, improving disease prognosis.

“Warning signs for red eye include severe pain and intense eye redness,” said Pleyer. Pronounced lid swelling, reduced or double vision, purulent drainage, and concomitant general complaints — such as headache, nausea, and vomiting — should also raise an alarm and could indicate an emergency, such as elevated intraocular pressure (or acute glaucoma), in which the eyeball is “rock hard” on palpation.

“Information about the causes of red eye can often be found in the patient’s medical history, and will essentially rely on whether one or both eyes are affected, whether complaints are acute or chronic, and how intense the pain is,” Pleyer reported.

It must be determined whether trauma, a foreign body, or contact lenses have played a role, whether vision is reduced, and whether the complaints are seasonal (as with allergies).

Concomitant complaints, such as pain, photophobia, and itching, and concomitant findings, such as blepharospasm (or uncontrolled blinking) and the consistency of conjunctival discharge, should also be assessed.

Even dry eye, which can seem trivial, can cause a patient significant discomfort. For severe manifestations, “we no long just prescribe artificial tears; we also administer anti-inflammatory treatment,” Pleyer said. And new research indicates that immunologically triggered phenomena can play a role in dry eyes, he added.

Eye problems account for 2% to 3% of all primary care and emergency department visits, according to one study. And most of these patients present with red eye.

The diagnosis of this condition can be quickly narrowed down with a simple examination of the naked eye and with targeted questions. In the event of emergencies or uncertainty about the diagnosis, an ophthalmologist should be consulted immediately, according to a German guide to red eye for non-ophthalmologists by Andreas Frings, MD, an ophthalmologist in Nuremberg, Germany, and his colleagues.

This article originally appeared in the German edition of Medscape.