Survival Benefit With Pembro in TNBC, but Only for Subgroup 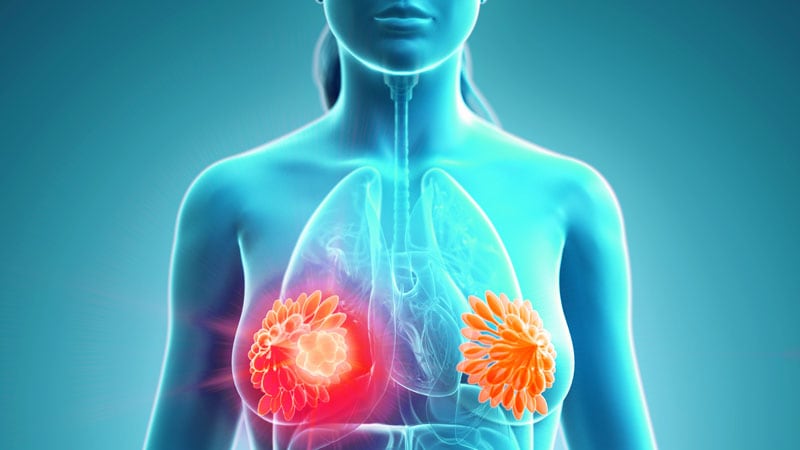 New longer-term results show a survival benefit from adding the immune checkpoint inhibitor pembrolizumab (Keytruda) to first-line chemotherapy for women with metastatic triple-negative breast cancer (TNBC), but only for a subgroup of women.

For that subgroup, this combination is the new standard of care, say experts.

The finding comes from the final report of results from the Keynote-355 trial and were presented at the European Society for Medical Oncology (ESMO) Annual Meeting 2021.

The survival benefit was seen in a subgroup of women whose tumors had a combined positive score (CPS) for PD-L1 expression of ≥10.

After a median follow-up of 44 months, the median overall survival (OS) was 23.0 months with pembrolizumab added to chemotherapy, compared with 16.1 months for chemotherapy alone. This translated into a hazard ratio (HR) for death with the combination of 0.73 (P = . 0093), reported Hope S. Rugo, MD, from the University of California, San Francisco, Comprehensive Cancer Center.

“These results support pembro-chemo as a new standard-of-care treatment regimen for patients with locally recurrent unresectable or metastatic TNBC whose tumors express PD-L1 with CPS 10 or more,” she said in a late-breaking oral abstract presentation.

“In Keynote-355, pembrolizumab plus chemotherapy is a transformative treatment for a subset of patients with metastatic triple-negative breast cancer and should be considered the new standard of care,” he said.

He also pointed out that the survival benefit observed with addition of pembrolizumab among patients with tumors of CPS ≥10 was seen regardless of the backbone chemotherapy regimen that was used.

Only Immunotherapy for TNBC

Previous results in TNBC had shown a progression-free survival (PFS) advantage for adding pembrolizumab to chemotherapy. Those results led to an accelerated approval in November 2020 of a new indication for pembrolizumab for the treatment of women with TNBC whose tumors express high levels of the PD-L1 target. That accelerated approval was recently converted to a full approval for this indication on the basis of data on OS from this confirmatory Keynote-355 trial.

At present, pembrolizumab is the only immunotherapy approved for use in TNBC.

Another product, atezolizumab (Tencentriq), also received accelerated approval for this indication, but a confirmatory trial failed to provide proof of clinical benefit. The manufacturer (Genentech/Roche) voluntarily withdrew the indication in August 2021, even though in April 2021, an advisory committee of the US Food and Drug Administration had voted for it to remain in place. The withdrawal of the indication has left women with TNBC whose conditions are stable with atezolizumab panicking as to what will happen to them, as reported recently by Medscape Medical News.

The reasons for the discordant results between the two trials are not clear, he said.

Details of the Confirmatory Keynote 355 Trial

This trial involved 847 patients with previously untreated, locally recurrent inoperable or metastatic TNBC. The patients were stratified on the basis of chemotherapy type, PD-L1 tumor expression, and prior treatment with the same class of neoadjuvant or adjuvant chemotherapy. They were randomly assigned in a 2:1 ratio to receive either pembrolizumab or placebo plus chemotherapy.

Similarly, there was no difference in OS in the intention-to-treat (ITT) population, including all randomized patients regardless of PD-L1 tumor status. For these patients, the median OS was 17.2 months in the pembrolizumab arm and 15.5 months in the placebo arm, yielding a nonsignificant HR of 0.89.

A subgroup analysis of survival by PD-L1 status showed that only PD-L1 CPS ≥10 was significantly associated with improved OS. Among this subgroup, factors significantly associated with better outcomes included age 65 and older, treatment in Asia, North American, Europe, and Oceania in comparison with the rest of the world, use of paclitaxel as the on-study chemotherapy, no prior adjuvant therapy, de novo metastasis, disease-free interval of ≥12 months, and <3 metastatic sites.

Treatment-related adverse events of any grade were similar between the study arms except that two patient deaths occurred in the pembrolizumab arm (one from acute kidney injury and one from pneumonia) compared with none in the placebo arm. In addition, the rate of adverse events leading to discontinuation was higher in with pembrolizumab than with placebo (18.3% vs 11%).

Not surprisingly, immune-related adverse events of any grade occurred more frequently with the immune checkpoint inhibitor (26.5% vs 6.4%), but only 5.3% of the events in the pembrolizumab arm were of grade ≥3, and none led to death. Only 2.5% led to drug discontinuation, the investigators commented. There were no immune-related adverse events of grade ≥3 in the placebo arm.

The study was funded by Merck Sharp & Dohme. Rugo has received institutional research funding from Merck and others, advisory/consultancy fees from Samsung and Napo, and honoraria from Puma and Mylan. Gomes-Albuin has received consulting and/or travel grants from Merck & others.

Neil Osterweil, an award-winning medical journalist, is a long-standing and frequent contributor to Medscape.