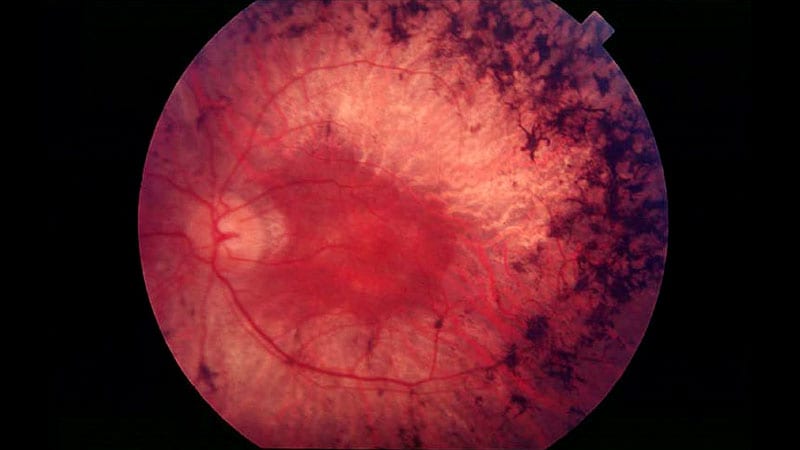 Researchers are expressing optimism that gene therapy can treat a wide range of eye diseases, including some that currently have no treatments.

Only one gene therapy has been approved by the US Food and Drug Administration (FDA) so far, and most trials are in early phases, but they are showing promise for the treatment of diseases caused by specific gene mutations as well as more common conditions, such as neovascular age-related macular degeneration (nAMD). And drug companies are investing.

“I certainly tell patients that I am optimistic that there will be treatments that will come their way in a meaningful time,” said Michel Michaelides, MD, an ophthalmology professor at UCL Institute of Ophthalmology and Moorfields Eye Hospital, London. “I used to previously say I was cautiously optimistic, but I’ve dropped the cautious aspect because I do believe there are just so many good, well-designed therapies and trials underway.”

Michaelides presented data from a preliminary trial of a gene therapy for RPGR-associated X-linked retinitis pigmentosa at the European Society of Retina Specialists (EURETINA) 2021 meeting, which was held online. He told Medscape Medical News that although only a handful of patients have been treated, “it’s changed their lives.”

Many more such trials are underway, said Kourous Rezaei, MD, an ophthalmology professor at Rush University Medical Center, in Chicago, Illinois, who gave an overview of gene therapy for nAMD at the meeting. “It’s only a question of when, and not if, regarding the development of gene therapy treatment options for patients.”

The eye is an ideal target for gene therapy because it is relatively accessible and discrete. Clinicians can deliver viruses containing therapeutic genes directly to the organ, or even to specific tissue within the eye, Rezaei said. “This provides a significant safety advantage, since it minimizes systemic exposure.”

In addition, less material is needed, which reduces manufacturing challenges, he said. Moreover, the eye is less prone than most organs to inflammation.

The first gene therapy to be approved by the FDA for treatment of an eye disease caused by a gene mutation was voretigene neparvovec-rzyl (Luxturna) for biallelic RPE65 mutation–associated retinal dystrophies. It was approved in December 2017, and some researchers at the EURETINA meeting reported that their real-world experiences since then have confirmed the successes that were seen in the clinical trials.

The treatment doesn’t restore visual acuity, but it improves sensitivity to light enough that patients are better able to find their way around, the researchers reported.

But gene therapy remains very challenging. In May, Biogen announced that its phase 3 trial of a gene therapy for X-linked retinitis pigmentosa had failed, and in June it made the same announcement about its program for choroideremia.

“In orphan indications, one does not have thousands of patients, we have only a few patients,” said Rezaei. “And many times there’s too much variability among these patients to be able to truly show a treatment effect.”

The study Michaelides presented at the EURETINA meeting enrolled only 10 patients. Of these, four patients who received an intermediate dose of botaretigene sparoparvovec experienced an improvement in retinal sensitivity. “We were able to share that their retinal sensitivity improved in the treated eye but continued to decline in their untreated eye, in keeping with the natural history trajectory of the disease that we’ve also documented,” he said.

Most patients in that trial have asked for treatment for their second eye. “What they describe is that they are able to navigate more levels of illumination comfortably and are now able to function in low light levels, at which they could not previously. They’re happier being out, especially in the dark,” Michaelides said.

The results are encouraging enough that the trial sponsors, MeiraGTx and Janssen, have agreed to fund a phase 3 trial, which aims to enroll up to 60 patients.

Also at the meeting, David G. Birch, PhD, from the Retina Foundation of the Southwest, in Dallas, Texas, presented similar successful results in the treatment of autosomal recessive USH2A mutation–associated retinitis pigmentosa from the Stellar trial. The sponsor, ProQR Therapeutics, plans to proceed with phase 3 trials.

In a separate line of research, Adverum Biotechnologies and Regenxbio are working on treating nAMD by infecting cells in the eye with a virus that will cause them to produce antivascular endothelial growth factor (VEGF) proteins. In this way, patients could benefit from a consistent suppression of the disease without the frequent intravitreal injections now required with anti-VEGF therapy, Rezaei said.

Adverum’s phase 1 OPTIC trial of intravitreal vector delivery of ADVM-022 showed that the treatment was well tolerated. Moreover, 60% of patients were injection-free after 1 year. On the basis of these results, the company extended the trial.

Regenxbio reported reductions in anti-VEGF injections of 58.3% to 81.2% in different cohorts that underwent treatment with its subretinal RGX-314 gene therapy. Tolerability was good in this phase 1/2a trial, and the company has launched a phase 3 trial, ATMOSPHERE. It is also exploring suprachoroidal delivery.

The same approaches might work in the treatment diabetic macular edema (DME), but in April, Adverum announced that it was no longer pursuing development of its gene therapy for DME after patients in its INFINITY trial of that treatment experienced adverse events, including rapid, difficult-to-treat decreases in intraocular pressure.