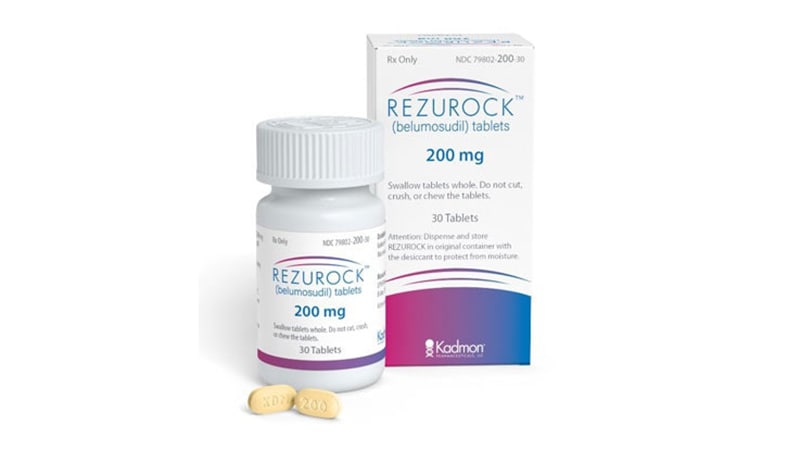 The US Food and Drug Administration (FDA) has granted a full approval for belumosudil (Rezurock) for the treatment of adult and pediatric patients 12 years and older with chronic graft-versus-host disease (cGVHD) after failure of at least two prior lines of systemic therapy.

A once-daily oral treatment, belumosudil is the first and only FDA-approved small-molecule inhibitor of the ROCK2 signaling pathway, which modulates inflammatory responses and fibrotic processes.

Belumosudil is a “new treatment paradigm for thousands of cGVHD patients, including those with difficult-to-treat manifestations like fibrosis,” said Corey Cutler, MD, MPH, medical director, Adult Stem Cell Transplantation Program at the Dana-Farber Cancer Institute in Boston, in a company press statement.

Belumosudil has shown “robust and durable responses across the spectrum of cGVHD and is safe and well tolerated, allowing patients to stay on therapy and achieve meaningful benefit from treatment,” he added.

The new approval of belumosudil is based on safety and efficacy results from ROCKstar, a randomized, open-label, multicenter trial of 65 patients with cGVHD who received two to five prior lines of systemic therapy. The median time from cGVHD diagnosis was 25.3 months and 48% of patients had four or more organs involved. Patients had a median of three prior lines of systemic therapy and 78% were refractory to their last therapy.

Through cycle 7, day 1 of treatment, there was an overall response rate (ORR) of 75% (including 6% complete responses and 69% partial responses).

ORR results were accompanied by clinically meaningful improvement from baseline in the Lee Symptom Scale (LSS) score, a chronic GVHD symptom measurement, in 52% of patients through cycle 7, day 1 of treatment, according to the company.

“Patients receiving belumosudil reported significant improvements in cGVHD symptoms, showing that not only did treatment result in organ responses, but it also made people feel better. This is so important for a chronic disease with a high symptom burden,” said Stephanie Lee, MD, MPH of the Fred Hutchinson Cancer Research Center in Seattle, Washington.

The company also said that belumosudil has been “well tolerated and adverse events have been consistent with those expected in patients with advanced cGVHD receiving corticosteroids and/or other immunosuppressants.”

Nick Mulcahy is an award-winning senior journalist for Medscape, focusing on oncology, and can be reached at  nmulcahy@medscape.net  and on Twitter:  @MulcahyNick