Morquio syndrome is characterized by a unique skeletal dysplasia with excessive accumulation of KS and/or C6S. Although most individuals with Morquio syndrome appear normal at birth, skeletal abnormalities often develop within the first year of life. At birth, some affected newborns may have a minor skeletal phenotype, such as hump back, chest protrusion, and prominent forehead, as confirmed with radiography.

In 1962, Pedrini et al isolated and identified KS in the urine of three patients with Morquio syndrome and reported that this metabolic disorder differs from that observed in Hurler syndrome (mucopolysaccharidosis type I [MPS I]).
In 1965, McKusick et al classified Morquio syndrome, as well as Hurler and Hunter syndromes, as hereditary acid mucopolysaccharidoses (MPS I to MPS VI).

In 1971, Orii et al reported an attenuated (intermediate) form of MPS IVA.
At age 5 months, adduction of both thumbs was recognized, and, at age 18 months, a chest abnormality was noticed. At age 3 years, the patient had kyphosis, and an abnormal gait was present by age 5 years. The patient had keratosulfaturia and was diagnosed enzymatically with Morquio A syndrome at age 15 years. At age 18 years, he was 135 cm tall and showed milder skeletal deformities, such a pectus carinatum, hypermobile joints, and genu valgum, in addition to corneal clouding.

In 1974, GALNS enzyme and its deficiency were discovered and identified using oligosaccharide substrate prepared from C6S containing N-acetylgalactosamine-6-sulfate.
In 1976, O’Brien et al reported a patient with a mild clinical status similar to that of Morquio A syndrome. However, this patient was deficient in β-galactosidase.
In 1977, Arbisser et al reported a similar case with mild Morquio A syndrome–like symptoms resulting from a deficiency of β-galactosidase, described as MPS IVB.
Since then, Morquio syndrome has been differentiated into two forms, Morquio A syndrome and Morquio B syndrome.

In 1981, Orii et al reported a very mild form of Morquio A syndrome in two siblings.
Their initial symptom was hip joint pain at age 8 years; thus, both patients underwent femoral osteotomy at age 13 years. Both patients had keratosulfaturia, mild thorax changes, and corneal clouding, although they did not show unique pectus carinatum, genu valgum, excessive joint laxity, or facial changes. Initial radiographic studies in both cases revealed mild platyspondyly, slight anterior wedging of the lumbar vertebra, and minimal odontoid hypoplasia, as well as subtle capital femoral epiphyses. However, when they were aged 18 and 22 years, respectively, the ossified femoral heads had disappeared with erosion and widening of the femoral necks. These signs were more significant in the older brother. The two brothers were not diagnosed with Morquio A syndrome until age 29 and 25 years, respectively, and their heights were 147 and 157 cm, respectively. In 2015, they were age 52 and 57 years, respectively, and their clinical conditions were stable at the time. GALNS enzyme activity in fibroblasts of these patients was about 10% of that seen in cells from healthy controls.

Morquio A syndrome varies from severe systemic bone dysplasia to a lesser form of the disease, including only mild bone involvement.
See the image below. 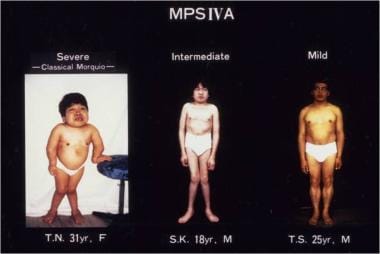