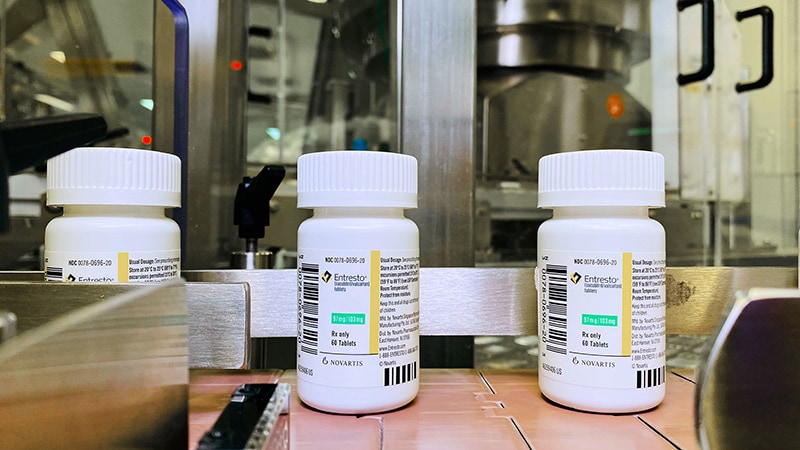 The US Food and Drug Administration (FDA) has approved a groundbreaking expanded indication for sacubitril/valsartan (Entresto), making it the first drug in the United States indicated for chronic heart failure (HF) not specifically characterized by ejection fraction.

The new labeling, as provided by Novartis, grants physicians a good deal of discretion in prescribing sacubitril/valsartan for patients with HF beyond those with HF and reduced ejection fraction (HFrEF), for which the drug was approved in 2015 primarily on the basis of the PARADIGM-HF trial.

The indication now reads, “to reduce the risk of cardiovascular death and hospitalization for heart failure in adult patients with chronic heart failure. Benefits are most clearly evident in patients with left ventricular ejection fraction (LVEF) below normal.”

Of note, the labeling cautions that “LVEF is a variable measure, so use clinical judgment in deciding whom to treat.”

The expanded indication essentially extends the sacubitril/valsartan option to many patients with HF and preserved LVEF (HFpEF), who in practice are most likely to have an LVEF in the range adjacent to “reduced,” long defined as “preserved” but lately categorized as “mid-range.”

But the FDA did not get so specific. In granting the expanded indication, which Novartis announced February 16 in a press release, the agency accommodated the December 15 majority recommendation of its Cardiovascular and Renal Drugs Advisory Committee that the PARAGON-HF trial “provided sufficient evidence to support” an indication beyond HFrEF.

The nature of the PARAGON-HF trial, along with detailed discussion among committee members after their vote tally, made it clear that the 12-to-1 majority favored an indication that would include clinically appropriate patients with “below normal” LVEF.

PARAGON-HF had assigned more than 4800 patients whose LVEF was 45% or higher and were in NYHA class 2-4 to receive sacubitril/valsartan or valsartan only. Those taking the combo drug showed a 13% drop in risk for HF hospitalization or cardiovascular deaths over an average of 3 years, which narrowly missed significance (P = .059).

The expanded approval “is a significant advancement, providing a treatment to many patients who were not eligible for treatment before, because their ejection fraction was above the region we normally considered reduced,” PARAGON-HF executive-committee co-chair Scott Solomon, MD, Brigham and Women’s Hospital, Boston, Massachusetts, said in the Novartis press release.

“We can now offer a treatment to a wider range of patients who have an LVEF below normal,” Solomon added.