Calcium absorption and regulation involve a complex interplay between multiple organ systems and regulatory hormones.
The 3 predominant sources of calcium and targets for regulation are the bones, renal filtration and reabsorption, and intestinal absorption. The major regulators of calcium levels are parathyroid hormone (PTH) and vitamin D, which target the bones, intestine, and kidney to increase serum calcium. Calcitonin, a more minor player in regulation, decreases serum calcium by its effects on bone and kidney. Cyclically, high levels of calcium suppress PTH and thereby decrease levels of the active form of vitamin D by decreasing the activity of renal 1 α -hydroxylase.

The kidney serves as the rapid regulator of calcium fluxes but has limited capacity to handle large swings in the serum calcium levels. Sixty-five percent of the calcium filtered through the glomeruli is reabsorbed in the proximal tubule by a process linked to sodium reabsorption. Although dependent on concentration and voltage, this process is independent of PTH. Approximately 20-25% of filtered calcium is reabsorbed in the ascending limb of the loop of Henle, whereas the remaining 10% is reabsorbed under the influence of PTH and vitamin D in the distal tubule.

The bones serve as a reservoir, storing 99% of the body’s calcium. Bony remodeling can engineer large, but slower, alterations in the serum calcium by a slow change in the balance between osteoblastic bone formation and osteoclastic bone resorption. However, deposition and release from hydroxyapatite can also provide slightly faster regulation. The intestine serves as a long-term homeostatic mechanism for calcium. Although the major source of calcium is dietary, seven eighths of dietary calcium is excreted unabsorbed in feces. Absorption occurs primarily in the ileum and jejunum by means of active transport and facilitated diffusion. 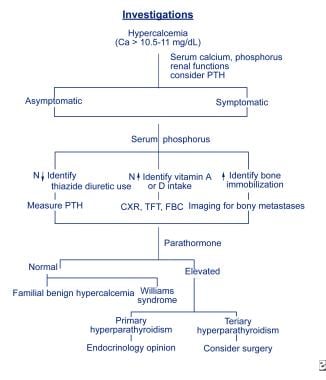