Pulmonary artery banding (PAB) is a technique of palliative surgical therapy used by congenital heart surgeons as a staged approach for operative correction of congenital heart defects. This technique was widely used in the past as an initial surgical intervention for infants born with cardiac defects characterized by left-to-right shunting and pulmonary overcirculation. Within the last two decades, early definitive intracardiac repair has largely replaced palliation with PAB. This trend has evolved because many centers have demonstrated improved outcomes with primary corrective surgery as an initial intervention in the neonate with congenital heart disease. Although the use of PAB has recently significantly decreased, it continues to maintain a therapeutic role in certain subsets of patients with congenital heart disease.

The primary objective of performing PAB is to reduce excessive pulmonary blood flow and protect the pulmonary vasculature from hypertrophy and irreversible (fixed) pulmonary hypertension. More recently, PAB has played a role in the preparation and “training” of the left ventricle (LV) in patients with D-transposition of the great arteries (d-TGA) who are evaluated for a delayed arterial switch procedure. It has found a similar role in training the LV in patients with L-transposition of the great arteries (L-TGA) who may also be candidates for an arterial switch procedure. 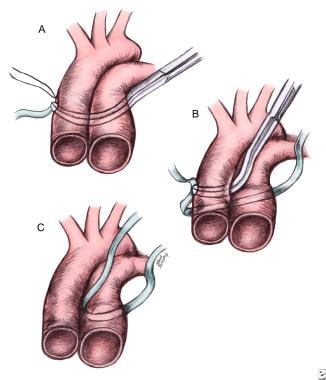