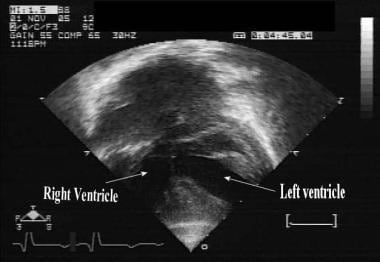 If the common AVV predominantly opens into the morphologic left ventricle, the defect is termed a left ventricular (LV)–type or LV-dominant AV septal defect (canal). If the common AVV opens predominantly into the morphologic right ventricle, the defect is termed a right ventricular (RV)–type or RV-dominant AV septal defect (canal). The degree of unbalance varies from mildly unbalanced with 2 nearly normal-sized ventricles to severely unbalanced with a single dominant ventricle and a second hypoplastic ventricle. This results in essentially single-ventricle physiology. Importantly, the ventricles, not the common AVV, are unbalanced. The development of the ventricles is unbalanced with hypoplasia of the inlet and outlet septum, resulting in hypoplasia of the chamber with malalignment of the ventricular septum.

AV septal defects occur at the embryonic age of 34-36 days when fusion of the endocardial cushions fails. This occurs when the endocardial cushion fibroblasts fail to migrate normally to form the septum of the AVC. As a result, a deficiency of the primum atrial septum, the ventricular septum, the septal leaflet of the tricuspid valve, and the anterior leaflet of the mitral valve occurs. The position of the AVVs becomes lower than normal. The anterior leaflet of the AVV extends across the ventricular septum and is shared between the left and right ventricles. If the leaflet opens preferentially toward either ventricle, blood flow is limited to the other ventricle, causing hypoplasia of that ventricle and creating unbalance between the 2 ventricles.