Although some authors state that Holmes (1824) or Kuhne (1906) first described tricuspid atresia,
Rashkind’s methodical and thorough historical review indicates that Kreysig (1817) reported the first case in 1817.
An 1812 report by the editors of the London Medical Review (1812) appears to fit the description of tricuspid atresia, but they did not use this specific term.

Little more than 3 decades ago, the terminology for this defect (eg, tricuspid atresia, univentricular heart, univentricular atrioventricular connection) was intensely debated.
This debate was summarized in a 1990 issue of The American Journal of Cardiology,
in which Rao offered strong evidence and argued on the basis of data that Bharati and Lev,
Wenink and Ottenkamp,
Gessner,
and Rao gathered support for tricuspid atresia as the correct and logical term to describe this well-characterized pathologic and clinical condition.

The pathologic anatomy of tricuspid atresia is best understood by reviewing variations in valvar morphology.

The most common type of tricuspid atresia is muscular (see the image below).
It is characterized by a dimple or a localized fibrous thickening in the floor of the right atrium at the expected site of the tricuspid valve. The muscular variety accounts for 89% of cases. 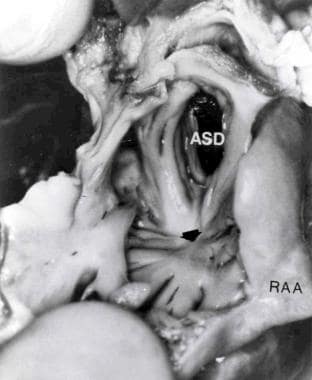 Cardiac specimen from a patient with the muscular type of tricuspid atresia. The right atrium was opened by cutting through the right atrial appendage (RAA). Note the dimple (arrow) in the floor of the right atrium with muscle fibers radiating around it. An atrial septal defect (ASD) is also shown. From Rao PS, Levy JM, Nikicicz E, Gilbert-Barness EF. Tricuspid atresia: association with persistent truncus arteriosus. Am Heart J 1991, 122:829, with permission.

In the membranous type (6.6%), the atrioventricular portion of the membranous septum forms the floor of the right atrium at the expected location of the tricuspid valve. This particular type appears to be associated with absent pulmonary valve leaflets.

Minute valvar cusps are fused together in the valvar type (1%).

In the Ebstein type (2.6%), fusion of the tricuspid valve leaflets occurs; attachment is displaced downward, and plastering of the leaflets to the right ventricular wall occurs.
This variant is rare but well documented.

In the final type, unguarded with a muscular shelf (0.6%), the atrioventricular junction is unguarded, but the inlet component of the morphologic right ventricle is separated from its outlet by a muscular shelf.

The right atrium is enlarged and hypertrophied. An interatrial communication is necessary for survival. This communication most commonly is a stretched patent foramen ovale. Sometimes, an ostium secundum or an ostium primum atrial septal defect (ASD) is present. In rare cases, the patent foramen ovale is obstructive and may form an aneurysm of the fossa ovalis, which is sometimes large enough to produce mitral inflow obstruction. The left atrium may be enlarged, especially when the pulmonary blood flow is increased. The mitral valve is morphologically normal; it is rarely incompetent and has a large orifice. The left ventricle is enlarged and hypertrophied but often morphologically normal.

The ventricular septal defect (VSD) is usually small; however, it can be large, or several VSDs may be present.
The ventricular septum is rarely intact. When present, the VSD may be conoventricular or perimembranous in type (inferior to the septal band), it may be of conal septal malalignment type (between the limbs of the septal band), or it may be of the muscular or atrioventricular canal type.
Muscular VSDs are the most common defects and are usually restrictive; they produce subpulmonary stenosis in patients with normally related great arteries and simulate subaortic obstruction in patients with transposition of the great arteries.

The great artery relationship is variable and forms the basis of a major classification and will be described in the next section. Obstruction to the pulmonary outflow tract is present in most cases of tricuspid atresia and is used in the scheme of classification. The aorta is either normal or slightly larger than normal. In 30% of patients, various associated cardiac defects are present; aortic coarctation and persistent left superior vena cava are particularly notable.

Defects that form the basis for classification are as follows:

D-Transposition of the great arteries

L-Transposition of the great arteries

Other malpositions of the great arteries

Defects that may need attention before or during palliative or total surgical correction are as follows:

Aneurysm of the atrial septum

Anomalous origin of the coronary arteries from the pulmonary artery

Coarctation of the aorta

Tubular hypoplasia of the aortic arch

Other associated defects are as follows:

Juxtaposition of the atrial appendages

Anomalous entry of coronary sinus into the left atrium

Tricuspid atresia is classified according to the morphology of the valve,
the radiographic appearance of pulmonary vascular markings,
and the associated cardiac defects.

Van Praagh and associates (1971) initially proposed a classification based on the morphology of the atretic tricuspid valve.
He and others later modified and expanded the classification, as described in Tricuspid Atresia.
All other morphologic types are described above in the Anatomy section. For pathologic, echocardiographic, and angiographic examples, particularly the rare anatomic types, the interested reader is referred to Tricuspid Atresia
and the Atlas of Heart Disease: Congenital Heart Disease.

The principle grouping continues to be based on the following interrelationships of the great arteries:

All types and subtypes are subdivided into the following subgroups:

Subgroup b – Pulmonary stenosis or hypoplasia

After the above categorization, the status of the ventricular septum (intact or VSD) and the presence of other associated malformations are described.

This unified classification includes all the previously described abnormalities in the positions of the great arteries and can be further expanded if new variations are revealed. This classification maintains uniformity of the subgroups and preserves the basic principles of classification that Kuhne, Edwards and Burchell, and Keith, Rowe, and Vlad devised.