Sir William Osler was one of the first to recognize the bicuspid aortic valve as a common congenital anomaly of the heart.
Leonardo da Vinci recognized the superior engineering advantages of the normal trileaflet valve.
However, bicuspid aortic valve is mentioned only briefly in many pediatric and cardiology textbooks.

The normal aortic valve has 3 equal-sized leaflets or cusps with 3 lines of coaptation. A congenitally bicuspid aortic valve has 2 functional leaflets. Most have one complete line of coaptation. Approximately half of cases have a low raphe. Stenotic or partially fused valves caused by inflammatory processes, such as rheumatic fever, are not included.

The embryonic truncus arteriosus is divided by the spiral conotruncal septum during development. The normal right and left aortic leaflets form at the junction of the ventricular and arterial ends of the conotruncal channel. The nonseptal leaflet (posterior) cusp normally forms from additional conotruncal channel tissue. Abnormalities in this area lead to the development of a bicuspid valve, often through incomplete separation (or fusion) of valve tissue.

Bicuspid aortic valve is often observed with other left-sided obstructive lesions such as coarctation of the aorta or interrupted aortic arch, suggesting a common developmental mechanism.
Specific gene mutations have been isolated.

The bicuspid valve is composed of 2 leaflets or cusps, usually of unequal size.
See the image below. 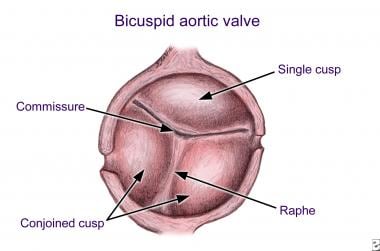 The larger leaflet is referred to as the conjoined leaflet. Two commissures (or hinge points) are present; usually, neither is partially fused. The presence of a partially fused commissure, which has also been called a high raphe, probably predisposes toward eventual stenosis. At least half of all congenitally bicuspid valves have a low raphe, which never attains the plane of the attachments of the two commissures and never extends to the free margin of the conjoined cusp. Redundancy of a conjoined leaflet may lead to prolapse and insufficiency.

Valve leaflet orientation and morphology can vary. A recent surgical study showed conjoined leaflets in 76% of specimens.
Of these, fusion of the raphe was noted between the right and left cusps in 86%, and fusion was noted between the left and noncoronary cusps in only 3%. Of the valves without raphes, more than 30% of the leaflets were unequal in size.