The peripheral vestibular system is an integral part of the labyrinth that lies in the otic capsule in the petrous portion of the temporal bone.

The semicircular canals are arranged as a set of 3 mutually orthogonal sensors; that is, each canal is at a right angle to the other 2. This is similar to the way 3 sides of a box meet at each corner and are at a right angle to one another. Furthermore, each canal is maximally sensitive to rotations that lie in the plane of the canal. The result of this arrangement is that 3 canals can uniquely specify the direction and amplitude of any arbitrary head rotation. The canals are organized into functional pairs, wherein both members of the pair lie in the same plane. Any rotation in that plane is excitatory to one of the members of the pair and inhibitory to the other.

Anatomy of the labyrinth. 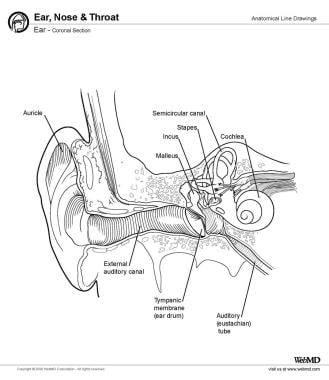