Lymph node metastasis reduces the survival rate of patients with squamous cell carcinoma by half. The survival rate is less than 5% in patients who previously underwent surgery and have a recurrent metastasis in the neck. Therefore, the control of the neck is one of the most important aspects in the successful management of these particular tumors. 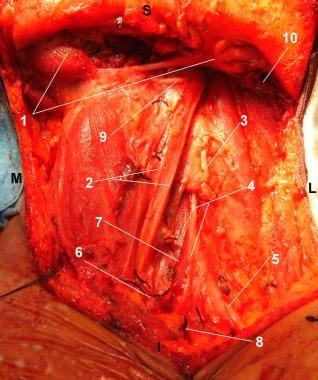 In the last 3 decades, progressive advances have occurred in the understanding of cervical fascial planes, lymphatic drainage patterns, preoperative staging, and extracapsular spread. A concern to maximize control and to minimize morbidity has prompted modifications to the classic neck dissection. One such modification is the preservation of 1 or more nonlymphatic structures (eg, spinal accessory nerve, internal jugular vein, sternocleidomastoid muscle). Further observations have indicated that the pattern of nodal disease depends on the primary site. Therefore, these findings led to another neck dissection modification, which is the selective preservation of 1 or several lymph node groups.