The orbit, which protects, supports, and maximizes the function of the eye, is shaped like a quadrilateral pyramid, with its base in plane with the orbital rim. Seven bones conjoin to form the orbital structure, as shown in the image below.

This image of the right orbit shows the 7 bones that contribute to its structure.

The orbits are aligned so that the medial walls are parallel and the lateral walls are perpendicular.
The arc from medial to lateral wall in each orbit is 45°. Lines dropped through a central anterior-to-posterior axis of each orbit bisect at a 45° angle. The floor is two-thirds the depth of the orbit. The average dimensions of the orbit are as follows: 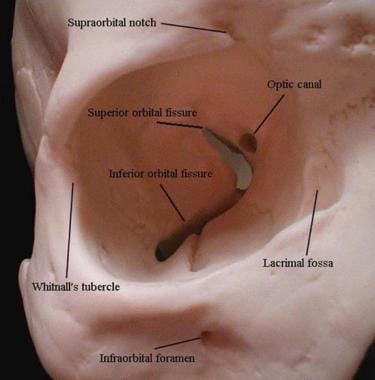 The trochlea is a cartilaginous ring that supports the superior oblique muscle. The trochlea attaches to the periorbita within the fovea trochlearis along the superior-medial orbit. The infraorbital foramen is located 10 mm inferior to the zygomaxillary suture.
Laterally, the orbital rim is marked by the Whitnall tubercle, which is 10 mm inferior to the zygomaticofrontal suture. The tubercle is the site of attachment of the lateral canthal tendon.

The structures entering through the superior orbital fissure are as follows:

The structures entering through the inferior orbital fissure are as follows:

The structures entering through the optic canal are as follows:

The anterior and posterior ethmoid foramina lie in the medial wall of the orbit along the frontoethmoidal suture line. The anterior and posterior ethmoid arteries pass through these foramina and are important surgical landmarks. The arteries mark the level of the cribriform plate and the relationship of the anterior cranial fossa to the orbits. The ethmoid arteries mark the superior limit for osteotomies during medial maxillectomy.