The forehead constitutes the upper third of the face. It is delineated superiorly by the hairline and inferiorly by the glabella and frontonasal groove (centrally) and the eyebrows overlying the supraorbital ridges (laterally.) The hairline is not a stable landmark among individuals; factors of sex, age, familial characteristics, and the influences of culture and fashion decide the hairline position for individuals.

Surgery in the upper third of the face, whether reconstructive or cosmetic, can be considered to involve at least 1 of 3 regions: the central forehead, the hair-bearing scalp, and the temporal regions. Anatomy must be reviewed in the context of the eyebrow-forehead-temple continuum.

Although the hairline defines the anatomic boundary between the forehead and the scalp, consideration must be given to anticipated patterns of baldness in the future, because scars may be exposed with a receding hairline.

The density of eyebrow hair generally remains stable with age, although it may frequently be altered in appearance by plucking or tattooing. Eyebrow position, contour, and movement are important features of facial expression. The medial eyebrow hairs are almost vertical in orientation, while laterally they become more horizontal. The eyebrow forms an arc laterally, with the peak at the junction of the medial two thirds and the lateral third. The brow is straighter and thicker in males, being at the level of the superior orbital rim; it is more arched, thinner, and higher in females.

The superior orbital margin forms a well-marked prominence that may be palpated along its length. It frequently presents the supraorbital notch, which can be felt at the junction of the medial third and lateral two thirds.

The Latin root of the word glabella means hairless and smooth, and the glabella is such in youth; however, glabellar transverse and vertical rhytides are common with age. Superiorly, between the eyebrows and the hairline, smoothness gives way to horizontal forehead rhytides with age. Rhytides may be considered to give an opportunity for scar camouflage in surgery.

The curved arc of the temporal line is palpable at the lateral limits of the forehead and is made more apparent with the action of the temporalis muscle with mastication. The superficial temporal artery is generally palpable in the temple, which is important in the consideration of a temporal artery biopsy and when local vascularized flaps are planned. The lateral orbital margin is visible and palpable in its extent, and the frontozygomatic suture frequently may be felt as a small depression some 10 mm superior to the lateral canthus. The superior margin of the zygomatic arch is generally palpable, extending between the lateral orbital rim and the anterior border of the tragus.

The course of the frontal branch of the facial nerve passes through the temple and forehead, placing this nerve at risk of injury at the time of surgical dissection. The usual trajectory of the nerve is from a point 5 mm below the tragus to a point 15 mm above the lateral extremity of the brow. Over the zygomatic arch, it is situated halfway between the lateral canthus and the inferior helix. This places it about 2.5 cm lateral to the lateral canthus. 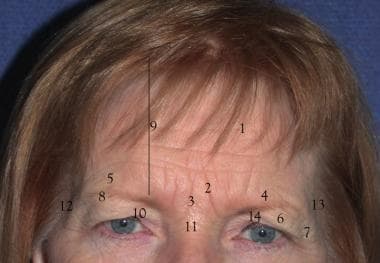 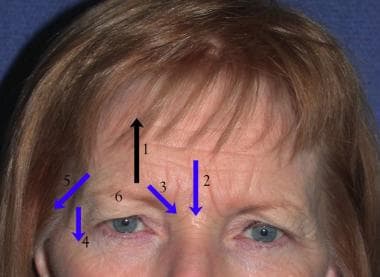