Cesarean delivery is one of the oldest surgical procedures in history, with literature dating back to at least 800 BCE.
Before the 20th century, however, the procedure was never undertaken unless the mother was dead or moribund.

During the late 19th and early 20th centuries, case reports began to arise of perimortem cesarean delivery (PMCD) successfully salvaging the fetus, and the procedure began to be seriously considered as a legitimate medical intervention. Well into the 20th century, the salvage rate was very low, and therefore, authors on the subject advocated it only after all other resuscitative measures had failed.

See the figure below. 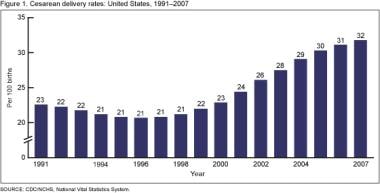 During the 1980s, several authors reported unexpected maternal recoveries after postmortem cesarean deliveries.
This led to the possibility that PMCD might actually improve, rather than worsen, a mother’s chance of survival during a collapse.

Because current pregnancy-related death rates are, fortunately, very low,
PMCD is rarely required at present. Although this procedure has traditionally been performed during resuscitative efforts in the emergency department (ED),
a case of PMCD in the prehospital setting has been reported.

Before 1986, only 188 PMCDs had been reported; a case review of the data reported between 1986 and 2004 revealed only 38 additional case reports.
A review of these 38 case reports revealed that the most common causes of maternal arrest included trauma, pulmonary embolism, cardiac causes, sepsis, and eclampsia.
Despite the paucity of data, PMCD infant survival rates as high as 70% have been reported; more recently, successful maternal resuscitations related to expedited delivery of the infant have been reported.
Other etiologic factors were noted in a recent case series, as 4 of 5 cases of PMCD involved obese women older than 35 years.

Despite the rarity of PMCD, it is worthy of attention because, when appropriately applied, it can save the life of both the mother and the infant. Furthermore, recent literature suggests that the role for PMCD may be broader than previously envisioned, and the procedure may attain a more prominent role in the future.

Currently, maternal diseases are vastly different in the industrialized world from what they were a century ago. A 1986 review highlighted the shift over the past century from primarily chronic, mostly infectious causes of death to primarily acute, mostly cardiorespiratory causes of death.

This shift is vitally important for outcome. A chronically ill mother may be inadequately nourishing her unborn child for months, thus making a good outcome of any delivery less likely. However, an acute event, such as pulmonary embolus, leaves the infant with some reserves and allows a less-than-optimal delivery setting to produce a good outcome.

In addition, the ability to monitor high-risk patients and intervene in the event of a crisis has greatly expanded over the past 50 years. The advent of advanced emergency transportation systems, advanced life support protocols, and intensive cardiorespiratory support units allows much better outcomes after prolonged anoxia than might have been possible before these advances.

Several factors must be considered in deciding whether to undertake PMCD.
The first is the estimated gestational age (EGA) of the fetus. This information is sometimes difficult to obtain in an emergency situation, and allowing time to perform an ultrasonographic estimate is not practical. Thus, a gross visual estimate may be necessary.

As a general rule, the uterus reaches the umbilicus at 20 weeks of gestational age and grows at a rate of approximately 1 cm in length for every week thereafter. Thus, in a relatively thin woman, a fundal height of 8 cm above the umbilicus would likely represent a pregnancy of 28 weeks’ gestation.

The resources of the institution should also be considered in the decision regarding PMCD. Under ideal circumstances (ie, with the availability of all skilled personnel and in a controlled setting), fetal salvageability may range from 23 to 28 weeks of EGA. If the EGA is 23 weeks and the institution’s nursery has never had a newborn of this EGA survive, PMCD is probably not indicated for the sake of the fetus.

PMCD also may not benefit the mother, compared with a third-trimester intervention, because the cardiovascular effects of pregnancy are less pronounced before 28 weeks, and delivery therefore will not achieve dramatic maternal cardiovascular improvement. Before 23 weeks of gestational age, aggressive maternal support is the only indicated intervention, and at least 1 case of complete maternal and fetal recovery after a prolonged arrest at 15 weeks of EGA has been reported.

Another concern relates to the length of time between arrest and delivery. Although the rare nature of the condition makes evidence somewhat sketchy at best, early intervention is strongly supported in the course of a cardiopulmonary arrest at advanced gestational age.

The latest reported survival was of an infant delivered 30 minutes after a maternal suicide,
but the best outcomes in terms of infant neurologic status appear to occur if the infant is delivered within 5 minutes of maternal cardiac arrest. This means the decision to operate must be made and surgery begun by 4 minutes into the arrest.

The same authors that proposed this timeframe reviewed the literature again in 2005 and reported 7 infant survivals in deliveries occurring more than 15 minutes after maternal cardiac arrest.
These findings suggest that considering PMCD is prudent, even if there has been some delay after a diagnosed cardiac arrest. Notably, the authors again confirmed that maternal status did not worsen in any case in which a PMCD was undertaken and seemed to improve in 13 of 20 cases published. In addition, a recent case series notes that of the 4 survivors (out of 5), 3 cases had PMCD initiated 6-14 minutes after maternal arrest, and initial follow-up was encouraging in all 4 infants.

A study by Rose et al reinforced the concept that arrangements for delivery should be made at the same time with initiation of maternal resuscitative efforts if the uterus is palpable at or above the umbilicus. The authors also added that if maternal condition is not rapidly reversible, hysterotomy with delivery should be performed regardless of fetal viability or elapsed time since arrest.

Another factor to be considered is the adequacy of other resuscitative efforts in the interim. Adequate chest compressions and displacement of the gravid uterus off the venous return from the lower extremities are both proven to improve maternal oxygenation. The fetus lives on the steep portion of the oxygen dissociation curve; therefore, relatively minor maternal changes may result in dramatic changes for the fetus. Resuscitative efforts also must include postcesarean infant resuscitation.

Documenting fetal heart tones before PMCD is not required, partly because it is time consuming and may negatively impact the baby’s outcome and partly because maternal indications for the procedure are emergency concerns regardless of fetal status.

A special case of PMCD is the scheduled PMCD. This involves a woman who is deemed brain dead but is maintained on artificial support for the purpose of allowing fetal maturity. Successful cases of scheduled PMCD have been reported from EGAs as early as 6 weeks,
but an ethics issue arises regarding extraordinary support measures for the sole purpose of providing a fetal incubator. Full informed consent from the next of kin is mandatory.

The most likely timeframe for both successful support and acceptance of the value of support is at 24-27 weeks of EGA,
when a few days make a large difference to fetal outcome. Support beyond likely fetal survival is controversial.
Dillon and colleagues make a strong distinction between true brain death and persistent vegetative state, arguing that termination of support measures is ethically defensible only in the former case.

Yet another factor that may affect decision making is potential medicolegal considerations. Fear of litigation may prevent intervention in what would be, by all medical judgment, appropriate circumstances for a PMCD. It should be kept in mind, however, that no lawsuits filed on the basis of wrongful performance of PMCD have been reported in the literature.
Only 1 legal penalty has been levied in regard to PMCD—the death penalty, which was given in the 18th century for failure to perform the procedure.

Generally, PMCD is deemed an emergency procedure for which consent is not possible. When maternal consent is not an issue, no other opinion should be deemed as legally binding in the emergency setting. Clearly, when the situation involves a ventilator-dependent, brain-dead patient being kept alive solely as a nursery, next-of-kin decisions become relevant, and legal and, possibly, spiritual, counsel should be sought.

Contraindications to PMCD include the following:

Return of spontaneous circulation after brief period of resuscitation