Epiglottitis is usually an infectious process of bacterial etiology directly or from bacteremia, but it can be caused by caustic ingestion, thermal injury, or direct trauma. Historically caused by Haemophilus influenzae type B, it was also a disease of children 2-7 years of age. With the introduction of the HiB vaccine in the 1980s, not only has the incidence of the disease lessened, but also the age prevalence and the bacteriology have changed. In the United states, prior to Hib vaccine the annual incidence rate for children under 5 years was 5 per 100,000.
The median age of children with epiglottitis has increased from 3 years to 6-12 years.
Risk factors for epiglottitis include incomplete or lack of immunizations for Hib or immune deficiency.
In addition, a review of pediatric upper airway infections suggests that bacterial tracheitis is more prevalent now than epiglottitis or croup.

The changes in age distribution have changed the clinical presentation. The classic triad of dysphagia, drooling, and distress (3 “D’s”) can still be seen in the younger patients. Patients younger than 1 year may have an unclear course of fever and respiratory distress. The distinction between croup, laryngotracheitis, and epiglottitis is more difficult in younger children. Older children and adults may have subtler signs of respiratory difficulties, i.e. inability to lay flat, voice changes, and dysphagia out of proportion to clinical findings. The classical signs of ‘‘tripod position’’ are drooling, stridor, dyspnea, tachypnea and a child sitting forward assuming the sniffing position in order to maximize the airway. These classical signs may not be seen in older children, adults, or those early in the disease process.
There may also be pain with movement of the larynx. In comparison to retropharyngeal abscess presentation, another differential for upper airway obstruction in children, epiglottitis usually has a more acute-onset presentation.
An analysis of 19,374 croup patients and 236 epiglottitis patients from 146 Korean Emergency Departments found that epiglottitis patients presented with dyspnea, sore throat, and vomiting more often than croup patients.
In a case series of 134 children with epiglottitis from one state, the primary symptoms were noted in the following order in regards to percentage of symptomatology; difficulty breathing (80%), stridor (80%), muffled or hoarse voice (79%), pharyngitis (73%), fever (57%), sore throat (50%), tenderness of the anterior neck (38%), cough (30%), difficulty swallowing (26%), and change in voice (20%).
Another case series that evaluated 102 children with croup and 101 children with epiglottitis found that cough was more common in the children with croup while drooling, preferring to sit, refusal to swallow and dysphagia were more common in the patients with epiglottitis.

Other than type B H influenzae, Streptococcus pneumoniae and the Streptococcus species (including group A streptococcus), and Staphylococcus aureus (including methicillin resistant) are the most common bacterial causes.
Nontypeable Haemophilus influenzae have also been reported as causes of epiglottitis.

Children with viral infections can also present with epiglottitis secondary to subsequent superinfection with bacteria, including Epstein-Barr, varicella-zoster, parainfluenza, and herpes simplex viruses.

Epiglottitis can occur in fully immunized children, thus it should not be removed from the differential of children presenting with typical symptoms (see image below). 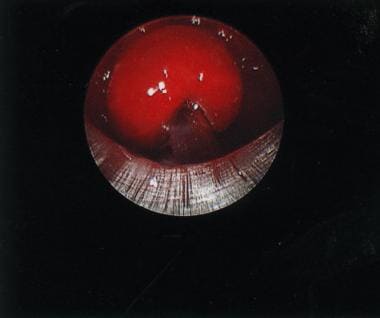 Postintubation image in a child with acute epiglottitis. Note the cherry red epiglottis. This image was taken in 2008; the child was completely immunized and grew Haemophilus influenzae (Hib) from surface culture.

As untreated, epiglottitis can rapidly lead to upper airway obstruction and death, it must be considered in children presenting with upper airway compromise and fever in younger children and sore throat out of proportion to physical findings in older children.

As with many other aspects of the pediatric airway, the epiglottis is significantly different in children and adults. In the infant, the epiglottis is located more anteriorly and superiorly than in the adult, and it is at a greater angle with the trachea. It is also more omega shaped and floppy than the more rigid, U-shaped epiglottis in adults. All of these anatomical differences contribute to the rapid progression of upper airway obstruction in cases of epiglottitis.

In addition to infectious causes, numerous other causes of the epiglottic inflammation exist such as thermal inhalational injury or thermal ingestion,
trauma to the upper airway, such as foreign bodies, and chemical irritation.
Other etiologies include absence of immunization, an immunocompromised state, and smoking.
All of these diverse causes share the most serious complication of airway occlusion caused by the tissue edema; when untreated, this can lead to respiratory failure and death. In the young child, this can take place in hours. As the disease becomes more rare, its existence and its quick progression may be forgotten; therefore, it is crucial for clinicians to promptly recognize and appropriately treat epiglottitis.
See the image below. 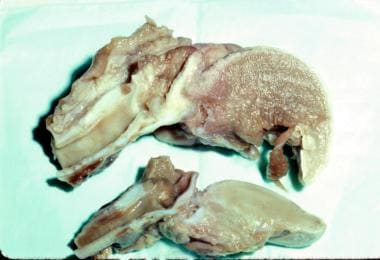 Comparison of a normal pediatric airway (bottom) and airway from a child who died from epiglottitis (top).

Other causes of upper airway obstruction can mimic epiglottitis, such as bacterial tracheitis, croup, retropharyngeal abscess, foreign body, diphtheria, laryngeal papillomas, angioedema and even Guillain-Barré syndrome with bilateral vocal cord paralysis and neurological compromise. It is important to manage and protect the airway in all situations involved.