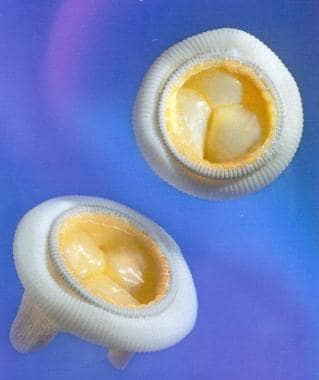 Replacement of diseased valves with prosthetic heart valves reduces the morbidity and mortality associated with native valvular disease, but it comes at the expense of risking complications related to the implanted prosthetic device. Emergency medicine physicians must be able to rapidly identify patients at risk and begin appropriate diagnostic testing, stabilization, and treatment. Even when promptly recognized and treated, acute prosthetic valve failure is associated with a high mortality rate.

In a retrospective cohort analysis of 4253 patients who underwent primary isolated aortic-valve replacement, 15-year survival and stroke rates were equivalent with bioprosthetic and mechanical valves. For bioprosthetic valves, the risk of repeat surgery was greater but the incidence of major bleeding was lower.

Signs and symptoms of prosthetic heart valve malfunction depend on the type of valve, its location, and the nature of the complication. Presentations may include the following:

Subacute valvular failure: Symptoms of gradually worsening congestive heart failure; they also may present with unstable angina or, at times, may be entirely asymptomatic

Anticoagulant-related hemorrhage: Symptoms related to the site of hemorrhage

A history of fever should raise the possibility of prosthetic valve endocarditis (PVE).

Additional findings may include the following:

Subacute valvular failure: Rales and jugular venous distention; signs of right-side failure; a new regurgitant murmur or absence of normal closing sounds; a new or worsening hemolytic anemia (may be the only presenting abnormality)

Laboratory studies that may be useful include the following:

Imaging studies that may be helpful include the following:

Chest radiography: This can help in delineating the valvular morphology and determining whether the valve and occluder are intact; each of the most commonly used valve types has its own characteristic radiographic appearance

Computed tomography: A consensus statement from the Society of Cardiovascular Computed Tomography (SCCT) states that CT should be performed as part of the evaluation of all patients being considered for transcatheter aortic valve implantation (TAVI)/transcatheter aortic valve replacement (TAVR), except those in whom CT is contraindicated,
and that the CT images should be interpreted with a member of the TAVI/TAVR team or reviewed with the operator before the procedure

In patients with acute valvular failure, diagnostic studies must be performed simultaneously with resuscitative efforts.

Treatment approaches to primary valve failure include the following:

Treatment approaches to PVE include the following:

Treatment approaches to thromboembolic complications include the following:

Treatment approaches to prosthetic valve thrombosis include the following:

Thrombolytic therapy (appropriate for selected patients with thrombosed prosthetic valves): Should always be performed in conjunction with cardiovascular surgical consultation

In cases of major anticoagulant-related hemorrhage, reversal of anticoagulation