Small-bowel obstruction (SBO) is caused by a variety of pathologic processes. The most common cause of SBO in developed countries is intra-abdominal adhesions, accounting for approximately 65% to 75% of cases, followed by hernias, Crohn disease, malignancy, and volvulus.
In contrast, SBO in developing countries is primary caused by hernias (30-40%), adhesions (about 30%), and tuberculosis (about 10%), along with malignancy, Crohn disease, volvulus, and parasitic infections.
The general trend in developing countries is an increased incidence of SBO from adhesions, with a higher incidence of laparotomies. See the image below. 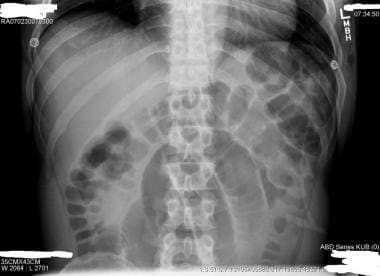 Symptoms of SBO can be characterized as either partial or complete versus simple or strangulated. The classic symptoms of nausea, vomiting, abdominal pain, and constipation are rarely present in all cases of SBO. Abdominal pain associated with SBO is often described as crampy and intermittent. Without treatment, the abdominal pain can increase as a result of bowel perforation and ischemia. Therefore, having a clinical suspicion for the condition is paramount to early identification and intervention. Furthermore, the clinical presentation of the patients varies and no one clinical symptom on its own identifies the majority of patients with SBO. Some studies have suggested that the absence of passage of flatus and/or feces and vomiting are the most common presenting symptoms, with abdominal discomfort/distention the most frequent physical examination findings.
Other studies have shown that abdominal pain is present in the majority of patients found to have SBO.

Some signs and symptoms associated with SBO include the following:

Nausea/vomiting (60-80%): The vomitus can often be bilious in nature

Constipation/absence of flatus (80-90%): Typically a later finding of SBO

Fever and tachycardia: Late findings and may be associated with strangulation

Some risk factors associated with SBO include the following:

Previous abdominal or pelvic surgery, previous radiation therapy, or both: May be part of the patient’s medical history

The following are adjunctive laboratory tests used in the evaluation of SBO:

Serum chemistries: Rarely abnormal early in the disease unless due to vomiting or dehydration

BUN/creatinine levels: May be elevated in dehydration due to vomiting

CBC count: Elevation can be associated with complications

Laboratory tests to exclude biliary or hepatic disease are also needed. They include the following:

Obtain plain radiographs first for patients in whom SBO is suspected. Although not sensitive, upright abdominal films may help substantiate the diagnosis if the presence of air-fluid levels or a paucity of gas is observed. Note that supine films may obscure the detection of air-fluid levels.

Multislice CT has been show to be a particularly effective imaging tool for evaluating patients suspected of having SBO, with a sensitivity of over 95%.
CT imaging is also capable of detecting complications of SBO not visualized on plain films, including ischemia, perforation, mesenteric edema, and pneumatosis.

Ultrasonography is less costly and invasive than CT scanning and may reliably exclude SBO in as many as 89% of patients; specificity is reportedly 100%. It may be a useful alternative imaging modality in children and pregnant women.

Enteroclysis is another valuable diagnostic test in detecting the presence of obstruction and in differentiating partial from complete blockages. This study is useful when plain radiographic findings are normal in the presence of clinical signs of SBO or when plain radiographic findings are nonspecific. However, CT imaging has superseded enteroclysis due to the increased availability of CT scanners as well as owing to the procedure’s increased risk of perforation and aspiration.

Nonoperative treatment for several types of SBO are as follows:

Malignant tumor – Obstruction by tumor is usually caused by metastasis; initial treatment should be nonoperative (surgical resection is recommended when feasible)

Acute postoperative obstruction – This is difficult to diagnose because symptoms are often attributed to incisional pain and postoperative ileus; treatment should be nonoperative

A strangulated obstruction is a surgical emergency. In patients with a complete small-bowel obstruction (SBO), the risk of strangulation is high and early surgical intervention is warranted. Laparoscopy has been shown to be safe and effective in selected cases of SBO.