More than 165,000 species of caterpillars in the order Lepidoptera (phylum Arthropoda, class Insecta) exist. About 150 are of medical importance. This importance lies in the ability of many species to induce an irritant or toxic dermatitis in humans and in the ability of some species to sting. Caterpillars are the larval forms of moths and butterflies. After hatching from their eggs, caterpillars pass through 4-5 instars (stages between molts) before they pupate in a cocoon. The adult moth or butterfly emerges from the cocoon to reproduce the next generation. More than 50 species in the United States alone are capable of inflicting a painful sting. Seasonal epidemics of dermatitis can occur when caterpillars are numerous.

The most dangerous caterpillar in the United States is the puss caterpillar or asp (Megalopyge opercularis; shown in the image below), the larval form of the flannel moth. It is found throughout the Southeast, from Maryland to Mexico. Stings from this species are common from June through September. 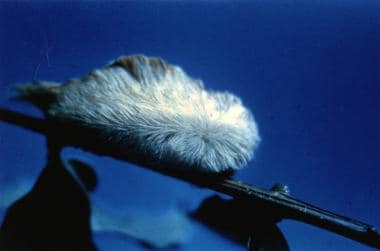