Cnidaria (formerly Coelenterata) is a phylum of aquatic invertebrates responsible for more envenomations than any other marine phylum. Approximately 9000 species of Cnidaria are known; roughly 100 are toxic to humans. These animals feature a gastrovascular cavity with a single opening used in digestion and circulation. They also possess a stinging mechanism that enables the organism to envenomate.

Though taxonomic classification is a dynamic process, there are currently three recognized Cnidaria subphyla. The subphylum Medusozoa contains five classes: (1) Hydrozoa, (2) Scyphozoa, (3) Cubozoa, (4) Polypodiozoa, and (5) Staurozoa. Species from each class have caused human envenomations. The subphyla Anthozoa and Myxozoa have also been implicated in envenomation. 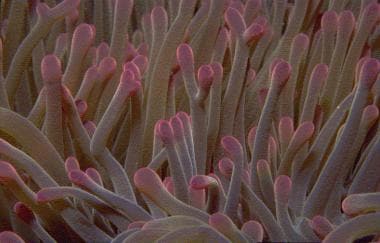 Of the many venomous species, three deserve particular attention because of their potential to cause significant morbidity or mortality: the box jellyfish Chironex fleckeri, the carybdeid Carukia barnesi, and the Portuguese man-of-war Physalia physalis.