Introduction to the TUNA Procedure

Transurethral needle ablation (TUNA) of the prostate is a procedure used to treat benign prostatic hyperplasia (BPH). It is performed by placing interstitial radiofrequency (RF) needles through the urethra and into the lateral lobes of the prostate, causing heat-induced coagulation necrosis. The tissue is heated to 110°C at an RF power of 456 kHz for approximately 3 minutes per lesion. A coagulation defect is created.

Transurethral resection of the prostate (TURP) was originally developed in the United States between 1920 and 1930 and was generally considered the criterion standard for surgical management of BPH.

Advances in the surgical treatment of BPH have come via applications of traditional electrosurgical current. TUNA is one of these minimally invasive treatments of prostatism. It began as a treatment in the early 1990s, with the first preliminary trials on humans in 1993. The first studies in the United States began in 1994, and the US Food and Drug Administration approved TUNA of the prostate in 1996.

However, a decline in the use of this procedure has occurred as newer techniques to treat BPH (laser ablation/enucleation, thermotherapy) have arisen and become more popular.
Contributing to its decline, TUNA has also been noted to have a high retreatment rate at 20 months follow-up.

The TUNA system produces thermal tissue ablation by applying low-level RF energy to prostate tissue. The generated RF is in the form of electrical energy and is delivered by the 2 electrodes, which are in contact with the patient. As the prostate cells resist passage of the current, thermal energy is produced by friction and by the heating of water molecules. This leads to tissue heating and, ultimately, coagulation necrosis. Thermal lesions occur only in a localized area, because the RF signal is transmitted into tissue only by direct contact.

Indications for the Performance of TUNA

Minimally invasive therapy is an option after failed medical management for benign hyperplasia of the prostate. This therapy is also the primary treatment for patients who are not interested in medical therapy and are unwilling to undergo TURP.

Generally, the ideal patient for TUNA is thought to be a man with obstructive symptoms and a prostate of 60 g or less with predominantly lateral lobes. Patients found to have larger glands may be offered different forms of treatment.

Contraindications to the Performance of TUNA

The manufacturer lists the following contraindications to TUNA therapy:

Clinical or histological evidence of prostatic cancer or bladder cancer

Patients whose prostate has previously been treated with nonpharmacologic therapies

Patients with any component(s) of an implantable neurostimulation system

Very limited experience has been gained regarding the use of TUNA to treat patients with high bladder necks. At this time, these patients should probably be treated with another form of therapy. 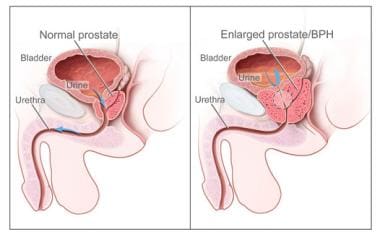 Two-panel drawing shows normal male reproductive and urinary anatomy and benign prostatic hyperplasia (BPH). Panel on the left shows the normal prostate and flow of urine from the bladder through the urethra. Panel on the right shows an enlarged prostate pressing on the bladder and urethra, blocking the flow of urine. Image courtesy of National Cancer Institue. 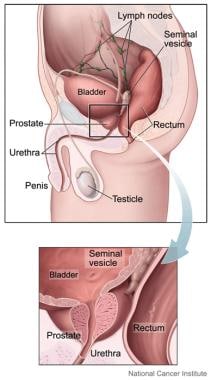 The prostate is part of the male reproductive system. It is about the size and shape of a walnut. It sits low in the pelvis, below the bladder and just in front of the rectum. The prostate helps make semen, the milky fluid that carries sperm from the testicles through the penis when a man ejaculates. The prostate surrounds part of the urethra, a tube that carries urine out of the bladder and through the penis. Image courtesy of National Cancer Institue.