Maxillofacial injuries are commonly encountered in the practice of emergency medicine. More than 50% of patients with these injuries have multisystem trauma that requires coordinated management between emergency physicians and surgical specialists in oral and maxillofacial surgery, otolaryngology, plastic surgery, ophthalmology, and trauma surgery.
.

The face is divided into equal thirds.

The upper face, from the hairline to the glabella. Fractures in this region involve the frontal bone and frontal sinus.

The midface, from the glabella to the base of the columella. Fractures is this region involve the maxilla, nasal bones, nasoethmoidal complex (NOE), zygomaticomaxillary complex (ZMC), and orbital floor.

The lower face, from the base of the columella to the soft tissue menton. The lower third is subdivided in an upper third from the columella base to the lip commissure and two lower thirds from the lower lip to menton. Fractures in this region involve the dentoalveolar segments and the mandible.

In developing countries, motor vehicle accident (MVA) is the most common cause of jaw fracture, whereas, in developed countries, assault is the most common cause and MVA is the second most common
. The review by Nalliah et al using the Nationwide Inpatient Sample found assault as the leading cause for hospitalization for reduction in facial fractures in the United States (36.5%), followed by MVA (16%), falls (15%), and other transportation accidents (3.5%)
.

The kinetic energy present in a moving object is a function of the mass multiplied by the square of its velocity. The dispersion of this kinetic energy during deceleration produces the force that results in injury. High-impact and low-impact forces are defined as greater or lesser than 50 times the force of gravity. These parameters impact on the resultant injury because the amount of force required to cause damage to facial bones differs regionally. The supraorbital rim, the maxilla and the mandible (symphysis and angle), and frontal bones require a high-impact force to be damaged. A low-impact force is all that is required to damage the zygoma and nasal bone.

The face is made up of vertical and horizontal buttresses where bone is thicker to neutralize forces applied to it. Reduction and fixation of these key areas are the basis of maxillofacial reconstruction
.

Frontal bone fractures: usually result from a high velocity blunt trauma to the forehead (e.g. MVA). The anterior and/or posterior table of the frontal sinus may be involved. More than one-third of patients with frontal sinus fractures are likely to have concomitant intracranial injury
.

Orbital floor fractures: Injury to the orbital floor can result in an isolated fracture or can be accompanied by a medial wall fracture. There are three recognized theories regarding mechanism of injury; globe-to-wall theory, hydraulic theory and bone conduction theory. Most injuries are associated with traumatic injury through interpersonal violence, sport or road-traffic collision
.

Nasal fractures: Because of the prominence of the nose and its central location on the face, nasal fractures are the most common facial fracture
.

Nasoethmoidal fractures (NOE): As the incidence of high-speed, high-force accidents has increased over the decades, so too has the number of such fractures. Due to the degree of force and the vectors involved, NOE fractures rarely occur as isolated events. Associated injures often include central nervous system injury, cribriform plate fracture, cerebrospinal fluid rhinorrhea, and fractures of the frontal bone, orbital floor, and middle third of the face, as well as injury to the lacrimal system
.

Maxillary fractures: These are classified as Le Fort I, II, or III
.

LeFort I fracture is a horizontal maxillary fracture across the inferior aspect of the maxilla and separates the alveolar process containing the maxillary teeth and hard palate from the rest of the maxilla. The fracture extends through the lower third of the septum and includes the medial and lateral maxillary sinus walls extending into the palatine bones and pterygoid plates.

LeFort II fracture is a pyramidal fracture starting at the nasal bone and extending through the ethmoid and lacrimal bones; downward through the zygomaticomaxillary suture; continuing posteriorly and laterally through the maxilla, below the zygoma; and into the pterygoid plates.

LeFort III fracture or craniofacial disjunction is a separation of all of the facial bones from the cranial base with simultaneous fracture of the zygoma, maxilla, and nasal bones. The fracture line extends posterolaterally through ethmoid bones, orbits, and pterygomaxillary suture into the sphenopalatine fossa. See the image below.

LeFort fractures of the maxilla.

Mandibular fractures: These can occur in multiple locations secondary to the U-shape of the jaw and the weak condylar neck. Fractures occur secondary to direct or indirect facial injury, including motor vehicle accidents, falls, sports, and assaults with blunt weapons or guns. Close to half of all patients with maxillofacial injuries have concomitant mandibular fractures
.

Alveolar fractures: These can occur in isolation from a direct low-energy force or can result from extension of the fracture line through the alveolar portion of the maxilla or mandible
.

Panfacial fractures: These usually are secondary to a high-energy mechanism resulting in injury to the upper face, midface, and lower face
. These fractures must be composed of at least 3 of the possible 4 facial units in order to be labeled panfacial. See the image below. 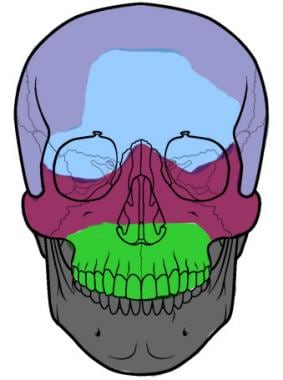 Initial Evaluation and Management of the Burn Patient