Stroke is defined as the damage to the brain and the resultant neurologic deficits that occur when the blood supply to a given area of the brain is lost. Stroke, however, is not a single process. Instead, it may be the result of 1 or more of the following processes: thrombotic stroke, embolic stroke, hemorrhagic stroke, and reversible ischemic stroke (see the images below). 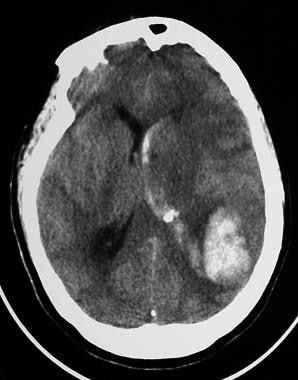 Hyperdensity in the left temporal parietal region consistent with an acute parenchymal hemorrhage with intraventricular depression.

A thrombotic stroke occurs when plaque and clots form locally on the wall of a cerebral artery, leading to a progressive narrowing of the arterial lumen until it becomes completely occluded.

An embolic stroke occurs when a clot and/or plaque becomes dislodged from the heart or walls of the extracranial arteries that supply the brain (eg, carotid artery bifurcation) and are carried by arterial blood flow into the brain. Once it reaches the brain, the embolus lodges in a small-diameter vessel, creating a blockage. The image below demonstrates the appearance of an acute embolic stroke on a computed tomography (CT) scan. 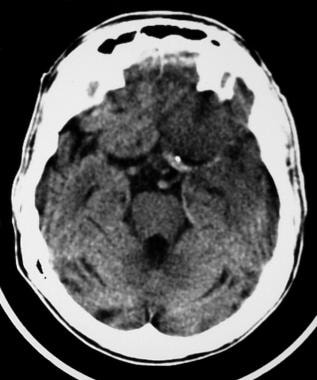 The most common appearance of an acute thromboembolic stroke is a normal computed tomography (CT) scan. The earliest finding that might be detected is an asymmetric hyperattenuating cerebral artery that corresponds to the neurologic deficit. The hyperattenuated area in the suprasellar cistern and left sylvian represents an intraluminal clot secondary to either local thrombosis or embolus. This has been referred to as the “hyperdense middle cerebral artery sign.”

A hemorrhagic stroke occurs when a blood vessel in the head ruptures, reducing blood flow to all or part of the brain. Aneurysms tend to rupture into the subarachnoid space overlying the surface of the brain. In this instance, injury to the brain results from a sudden and severe elevation in intracranial pressure. If high enough, this pressure leads to compression of both the arteries and veins, thus reducing the amount of arterial blood that can reach the brain and the amount of venous blood that can leave it.

A transient ischemic attack (TIA) occurs when a small thromboembolus occludes a small distal artery. The cessation of blood flow to the affected area of the brain is temporary, either because the small clot spontaneously breaks down and blood flow is re-established or because collateral vessels bypass the occluded segment before irreversible damage occurs. Although the deficits may resolve completely, the event should be considered an early warning sign of stroke. Early treatment of the conditions that can trigger a TIA may prevent a more devastating and permanent loss of brain function.

On the basis of a study of 43 patients with high-grade, asymptomatic carotid stenosis, Capoccia et al concluded that silent injuries following CAS can be assessed using a combination of biochemical marker measurements of brain damage, neuropsychometric testing, and diffusion-weighted imaging (DWI).
They found that silent injuries from carotid revascularization could be evaluated using DWI, the Mini–Mental State Examination (MMSE) test, and serum-level measurements for neuron-specific enolase (NSE) and S100beta protein (biochemical markers for cerebral injury).

In the study, carotid revascularization was accomplished using either endarterectomy (20 patients) or stenting (23 patients). Postoperatively, the number of new subcortical lesions found on DWI, the decline in MMSE scores, and the S100beta and NSE levels were greater in patients treated with stenting than in those who underwent endarterectomy.