Lower gastrointestinal (GI) hemorrhage is defined as bleeding from the bowel distal to the ligament of Treitz (see the following image). Lower GI bleeding can be of an acute or chronic nature. Massive gastrointestinal bleeding will result in hemodynamic instability and decreasing hemoglobin levels, which need to be treated with transfusions. 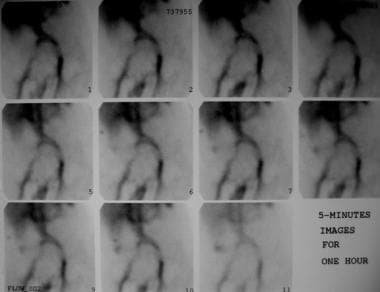 Technetium-99m (99mTc) red blood cell scan shows an abnormal focus of increasing activity in the right lower quadrant, consistent with gastrointestinal bleeding. This activity is seen to increase in intensity over time. The patient underwent angiography.

Diverticulosis has been implicated as the source of bleeding in as many as 60% of cases of lower GI bleeding. The diverticula are more prevalent in the left or sigmoid colon, but positive arteriographic findings for bleeding localizes the bleeding to the right colon in 60% of cases.

Colonoscopy after rapid oral purging has emerged as the procedure of choice for the evaluation of acute lower GI bleeding (69-90% yield), and it also provides a means for therapy.
This procedure involves the use of thermal contact modalities or epinephrine injections in cases of diverticula and vascular ectasia. Similarly, other causes of lower GI bleeding can be effectively treated during colonoscopy.

The American College of Gastroenterology guidelines for patients with acute overt lower GI bleeding include the following
:

Hematochezia associated with hemodynamic instability may be indicative of an upper GI bleeding source and thus warrants an upper endoscopy.

In the majority of patients, colonoscopy should be the initial diagnostic procedure and should be performed within 24 hr of patient presentation after adequate colon preparation.

Endoscopic hemostasis therapy should be provided to patients with high-risk endoscopic stigmata of bleeding, including active bleeding, non-bleeding visible vessel, or adherent clot.

The endoscopic hemostasis modality used (mechanical, thermal, injection, or combination) is most often guided by the etiology of bleeding, access to the bleeding site, and endoscopist experience with the various hemostasis modalities.

Repeat colonoscopy, with endoscopic hemostasis performed if indicated, should be considered for patients with evidence of recurrent bleeding.

Radiographic interventions (tagged red blood cell scintigraphy, computed tomographic angiography, and angiography) should be considered in high-risk patients with ongoing bleeding who do not respond adequately to resuscitation and who are unlikely to tolerate bowel preparation and colonoscopy.

However, the 2 widely used diagnostic tests for lower GI bleeding are nuclear scanning (see the image above) during episodes of bleeding or angiography (see the images below).
In cases in which colonoscopy is unsuccessful, scanning during episodes of bleeding and angiography are considered to be next imaging tests to determine the cause of the bleeding. Catheter directed angiography remains the best option in a patient in unstable condition and should be performed in cases of massive bleeding. 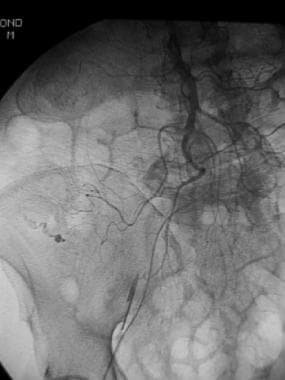 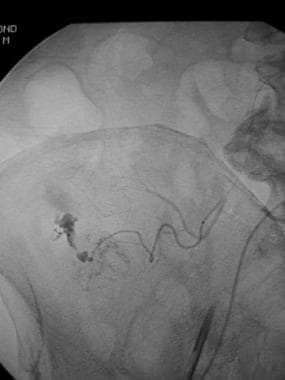 Selective arteriogram through a microcatheter further localizes the point of bleeding in a patient whose technetium-99m (99mTc) red blood cell scan showed an abnormal focus of increasing activity in the right lower quadrant.

An advantage of catheter directed angiography over colonoscopy or scintigraphy is that no special preparation is needed. Thus, it can be performed in a relatively short period; angiography also provides a means for immediate treatment. However, patients in stable condition can undergo scintigraphy to guide and increase the yield of angiography.

Scintigraphy and/or angiography also play important roles in diagnosis and embolization when colonoscopy reveals negative findings or when it is not feasible. Some investigators also advocate an upper GI endoscopy after colonoscopy yields negative results,
as about 10% of cases are ultimately found to involve an upper GI source of bleeding.

Two transcatheter methods for the treatment of GI bleeding include vasopressin infusion and embolization. Superselective embolization has become more accepted in recent years.

Vasopressin infusion causes vasoconstriction of the small arteries, arterioles, and capillaries, and it has been used for both upper and lower GI bleeds.
The rate of successful control of bleeding has been reported to be 70-90%. The repeat bleeding rate is reported to be 17-27%.

The infusion is started with the catheter in the main trunk of the mesenteric artery that is the cause of bleeding. The initial rate is 0.2 U/min. A follow-up angiogram is obtained after about 30 minutes. In cases of active hemorrhage, the rate is increased to 0.4 U/min. Higher rates are not recommended because the potential complications from vasoconstriction can exceed the benefits. The infusion is tapered at 6- to 12-hour intervals and then stopped if no further bleeding ensues.

Complications of vasopressin infusion include myocardial ischemia, arrhythmia, hypertension, bowel ischemia, peripheral vascular ischemia, and antidiuretic effects. Because of significant rebleeding, variable success, the need for ICU monitoring, and the aforementioned adverse effects of the infusion, renewed interest in embolization therapy has developed over the last few years. In fact, embolization has now become the preferred transcatheter therapy. Embolization also achieves immediate control of the bleeding, and ICU monitoring to the degree required with vasopressin infusion is avoided.

The aim of embolization is to decrease the arterial inflow so that the pressure at the bleeding site is decreased and hemostasis occurs. The important issue is to avoid devascularization of the tissues, which leads to ischemia and infarction.

In 1974, Bookstein first described transcatheter embolization by using an autologous clot.
Since then, various investigators have described small series of transcatheter embolization for lower GI bleeds, with varying success. The potential complication of bowel ischemia and infarction initially limited use of this technique. Earlier groups had described postembolization bowel infarction rates ranging from 0% to 23%. However, some authors claim that the high rate of significant ischemia may have been related to proximal embolization sites in relation to the marginal artery, as lack of large vascular collaterals in the large bowel may jeopardize significant areas of colon.

With this issue in mind, further studies with superselective catheterization techniques and embolization were performed using polyvinyl alcohol (PVA) particles and Gelfoam, although most of the studies have used microcoils (platinum coils), either alone or in conjunction with Gelfoam or PVA.

A study by Evangelista and Hallisey supported the use of superselective embolization as the most effective procedure in reducing complication rates.
The investigators reported an 88% success rate and argued against the use of PVA as the sole embolization agent, as the small particles may reach intramural circulation and thus occlude the submucosal plexus beyond the level of collateralization, leading to significant bowel ischemia. An advantage of coils is that they are visible and, therefore, more controllable.

Bandi et al also supported superselective embolization as a feasible, safe, and effective technique for treating acute lower GI hemorrhage.
They performed embolization in only those patients in whom they could successfully catheterize the arteria recta leading to the bleeding point. PVA alone (150-500 µm) was used in 28 of these procedures. In 25 patients who underwent objective follow-up with colonoscopy (n = 12), surgery (n = 9), or both (n = 4), mucosal ischemia was demonstrated in 6 (24%) of these patients, but they remained asymptomatic without clinical sequela. No clinically significant bowel ischemia was seen.