Imaging in Spinal Dysraphism and Myelomeningocele

Choosing the most appropriate modality for imaging congenital malformation of the spine (eg, spinal dysraphism/myelomeningocele) involves considering many factors. Imaging of the bony spine requires methods different from those used to image the spinal canal and its contents. The age of the patient and the required plane of imaging influence the choice of modality. The best way to image skeletal anomalies is by means of plain radiography, possibly combined with conventional tomography, though this modality has now been more or less replaced by CT.

Skeletal scintigraphy with technetium-99m diphosphonates has high sensitivity but low specificity. Bone scintigraphy is a useful procedure in children with backache of unknown origin. Minor vertebral anomalies may show increased radionuclide uptake because of abnormal stresses and reactive changes. Further imaging may be restricted when an abnormality is localized.

In the evaluation of the spinal canal, ultrasonography is limited to the neonatal period, though a spinal defect covered with soft tissue may be imaged well into adult life. Fetal ultrasonography is increasingly used as a primary screening tool for NTDs, usually at about 18 weeks’ gestational age. This trend reflects the increasing confidence in fetal ultrasonography. Ultrasonography helps in avoiding the calculated 1% risk of miscarriage associated with diagnostic amniocentesis.

In myelocele or myelomeningocele/meningomyelocele, detailed imaging before closure is usually not required, but after repair or spontaneous reepithelialization, imaging may be performed to depict associated pathology, such as diastematomyelia or lipoma, at other levels and to evaluate intracranial abnormalities.

Deterioration in neurologic function later in the disease course or after surgery suggests a complication; such deterioration is an indication for imaging to look for a surgically remediable cause of the deterioration, such as retethering of the cord as a result of adhesions or an increase in size of an inclusion lipoma, epidermoid, or hydromyelia. Normally, after repair, the cord is low; it should not be tethered unless scars extend into the closure site.

Spinal dysraphism, or neural tube defect (NTD), is a broad term encompassing a heterogeneous group of congenital spinal anomalies that result from defective closure of the neural tube early in fetal life and anomalous development of the caudal cell mass (see the images below). 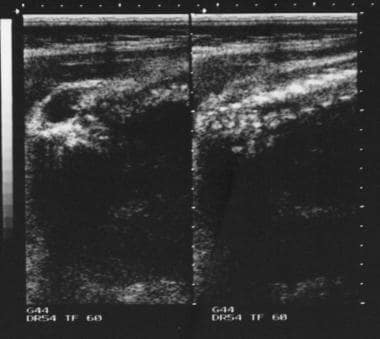 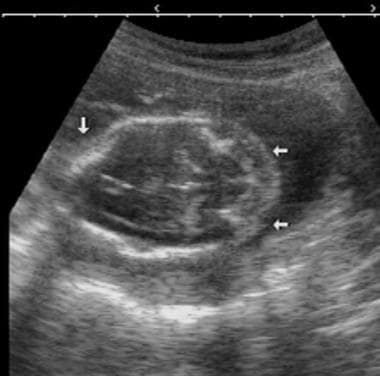 Some forms of spinal dysraphism may cause progressive neurologic deterioration. The anatomic features common to the entire group is an anomaly in the midline structures of the back, especially the absence of some of the neural arches, and defects of the skin, filum terminale, nerves, and spinal cord (see the images below).

Myelograms in a 5-year-old patient show the dorsal region of the spine and an anterior thoracic meningocele. Note the gross dorsal kyphosis. 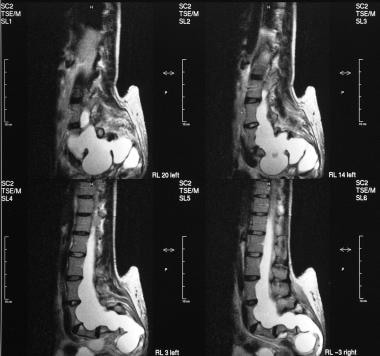 Myelograms in a 4-year-old patient show the lumbosacral region; a long, tethered cord; and diastematomyelia.

Spinal dysraphism occurs in closed forms and open forms. Open forms include myelocele, meningocele, and myelomeningocele. These open forms are often associated with hydrocephalus and Arnold-Chiari malformation type II and may be classified as spina bifida aperta. In 1886, Von Recklinghausen gave a detailed account of spina bifida cystica (aperta). Spina bifida is described in literature of the Middle Ages, although the condition was recognized even earlier. Indeed, the mythologic figure of the satyr may have its origins in the association of foot deformities with lumbar or lumbosacral hypertrichosis.

Open NTD (ONTD) represents a serious congenital anomaly. If the neural tube fails to fuse at the skull, the result may be that of anencephalus or encephalocele. Open NTDs, such as meningomyelocele, occurs when the tube fails to fuse along the spine. Infants with NTDs frequently have additional serious neurologic, musculoskeletal, genitourinary, and bowel anomalies.

Spina bifida occulta is characterized by the variable absence of several neural arches and various cutaneous abnormalities, such as lipoma, hemangioma, cutis aplasia, dermal sinus, and hairy patch; it is often associated with a low-lying conus and other spinal cord anomalies. In infants, whenever the conus lies below the L2-3 interspace, cord tethering should be considered. The term tethered cord implies that the cord may be attached to the vertebral column or subcutaneous tissues by a thickened filum terminale, fibrous band, dermal sinus tract, diastematomyelia, or a lipoma (lipomyelomeningocele). Patients with spina bifida occulta may present with scoliosis in later years.

Approximately 95% of couples that have a fetus affected with ONTD have a negative family history for ONTDs. Most ONTDs are caused by factors relating to multifactorial inheritance, including genetic and environmental factors.

Ultrasonography remains operator dependent; accurate diagnosis depends on the skill and experience of the operator and on the quality of the equipment.

Transaxial CT images may be difficult to interpret because of the complex anatomy of the vertebral bodies, the presence of segmentation anomalies, and the presence of spinal curvature abnormalities. With modern CT scanners, this limitation may not be such a disadvantage, inasmuch as sagittal and coronal reconstruction now provide exquisite images of the spine.

In parts of the developing world, MRI is not readily available. In addition, use of MRI may not be possible in patients with claustrophobia, and it is contraindicated for some patients with implanted devices. Children may require sedation.

Neural tube defects (NTDs) exact an enormous emotional and economic toll on families and health care systems in both developed and developing countries. The tragedy is that NTDs are preventable simply by having women take a folic acid supplement during the 2 months before they become pregnant. For all women, supplementation with folic acid, 0.4 mg daily before conception and for the first 3 months of pregnancy, reduces the risk of having a baby with spina bifida. Women considered to be at risk should take a higher dose (4 mg) of folic acid.

The etiology of spina bifida or anencephaly is multifactorial and includes genetic factors, environmental influences, and folic acid deficiency in the mothers. It is known that if a woman has had 1 baby with an NTD, the chance of having another affected baby is about 1 in 20. About one half of this risk is of anencephaly, and the other half is of spina bifida. A woman is at equal risk for either spina bifida or anencephaly in future pregnancies, regardless of which of these NTDs occurred in a previous pregnancy. She is also at risk for having a baby with an NTD if she has a close relative who has had a baby with either spina bifida or anencephaly or is taking certain drugs to control epilepsy. Ultrasonography is performed in high-risk pregnancies. If the sonograms do not clearly show an NTD, amniocentesis with alpha-fetoprotein (AFP) measurements is indicated.

Kleijer and associates measured amniotic fluid levels in 2180 patients judged to be at risk for fetal abnormality on the basis of previous history, family history, advanced maternal age, suspected fetal growth retardation, or the presence of hydramnios, and of 428 patients with a previous offspring who had an NTD, only 8 (1.9%) had a fetus with an NTD. In 12 patients examined before 20 weeks’ gestation, pregnancy was terminated because of an increase in amniotic fluid AFP level. Eleven fetuses had NTDs. No false-negative results were observed in the 1927 patients who were tested before 20 weeks’ gestation for whom the outcome of pregnancy was known. In patients tested after 20 weeks’ gestation, the amniotic fluid AFP concentration was increased in 20 fetuses with anencephaly, in 9 fetuses with severe congenital malformations without NTDs, and in 1 apparently healthy fetus.

Holschneider and associates analyzed the increased rate of antenatally diagnosed malformation and the accuracy of antenatal sonographic diagnosis and concluded that, because of the uncertainty of antenatal diagnosis and the uncertainty of many physiologic parameters, intrauterine surgical treatment could not be advocated.
They published a report concerning an increase in sonographic examinations at the First University Gynecological Hospital of Munich from 6000 studies in 1969 to more than 13,000 studies in 1982. In their study, a correct diagnosis was made in over 80% of cases. However, the diagnosis was incomplete in approximately 40% because of associated malformations of the GI tract, congenital heart disease, myelomeningocele in a correctly diagnosed hydrocephalus, and unrecognized cases. Since the time of their study, sonographic technology has improved. Nevertheless, fetal surgery is still in its infancy.

Measurement of amniotic fluid AChE levels confirms the diagnosis. Termination of the pregnancy is advised if results of this test are positive. The sensitivity of the entire screening process is estimated to be 86% for anencephaly and 78% for open spina bifida. The specificity is 99.99%.

The value of AChE qualitative analysis as a tool for the diagnosis of fetal NTD was investigated in a series of 2815 amniotic fluid samples. This test enabled successful identification of all 84 cases of ONTDs, 16 of which had been missed with ultrasonography. AChE electrophoresis made it possible to exclude 1 false-positive sonographic diagnosis of NTD and to differentiate meningocele from myelomeningocele. The authors’ experience suggests that AChE electrophoresis should be performed in all cases, in place of amniotic fluid AFP estimations; in all cases of fetal abnormality detected with sonography, especially in fetal hydrocephaly; and for all pregnant women who have had a previous pregnancy with an NTD.

Special racial groups should be targeted in terms of prophylaxis and screening; such groups include people of Celtic origin (Irish), the European white population, and the North American Hispanic population (which has a risk more than 3-fold higher than that of non-Hispanic whites). Migration studies in the white migrant population showed a prevalence of NTDs that more closely corresponded to the risk of the place to which they had migrated, as opposed to the place of their origin. By contrast, descendants of the black and Asian migrant populations in Europe and North America have prevalences not substantially higher than those of their parent countries. These variations are consistent with the theory that NTDs are a phenotypically heterogeneous group of malformations with multifactorial inheritance in some cases and single gene defects in others.