Although midgut volvulus is a complication of malrotation of bowel and mesenteric malfixation, primary volvulus of the small bowel is a distinctly different and rare entity characterized by torsion of the entire small bowel with normal mesenteric fixation.

The malrotated bowel is prone to torsion (as demonstrated in the first image below), which can lead to midgut volvulus. The second image, from a GI series, shows a lateral view of midgut volvulus. 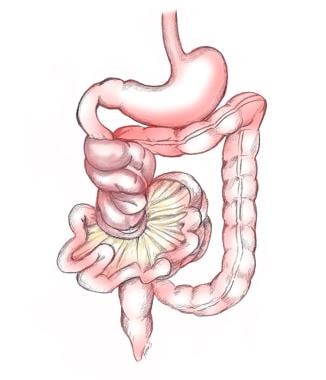 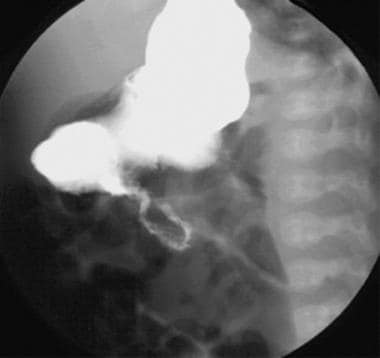 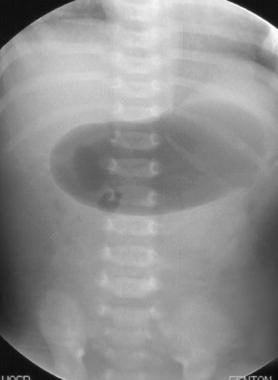 Supine radiograph in a newborn with midgut volvulus shows a high intestinal obstruction.

Older children with malrotation may manifest a failure to thrive, chronic recurrent abdominal pain, malabsorption, or other vague presentations. The older the child, the less clear is the clinical presentation. Nonrotation of the intestine may be asymptomatic and is an incidental finding on upper GI series performed for other reasons.

Associated anomalies are seen in approximately 60% of patients and include congenital heart disease with heterotaxy (abnormal positioning and arrangement of the abdominal organs, such as the spleen, liver, and major blood vessels; right-sided or left-sided isomerism). Malrotation is almost always present in patients with congenital diaphragmatic hernia and abdominal wall defects, such as omphalocele and gastroschisis. Also, malrotation is more common with imperforate anus, duodenal atresia, duodenal web, duodenal stenosis, preduodenal portal vein, annular pancreas, Hirschsprung disease, and biliary atresia.
.

In a meta-analysis, the incidence of rotational abnormalities and of acute midgut volvulus were significantly greater in patients with heterotaxy than in the normal population. The prophylactic Ladd procedure was associated with less morbidity and mortality than with emergency surgery.

Malrotation in a patient with congenital heart disease and heterotaxy is shown below. 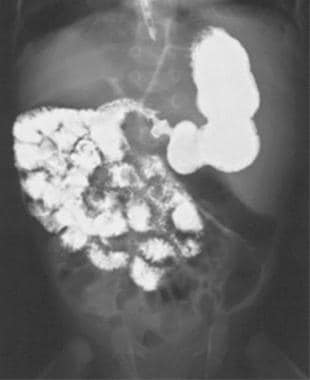 Upper GI series and a small bowel study show malrotation without midgut volvulus in a patient with complex congenital heart disease and heterotaxy. Note the small bowel in the right abdomen.

The diagnostic test of choice in a child with possible malrotation, with or without midgut volvulus, is an upper GI series.

In a study by Sizemore et al, an upper GI series in the detection of intestinal malrotation in infants and youths had a sensitivity of 96%, providing positive results in 156 of the 163 patients with surgically verified malrotation. In addition, the series showed midgut volvulus in 30 out of 38 patients in whom volvulus was surgically verified (sensitivity, 79%). Data from the study indicated that jejunal position can result in inaccurate interpretation of UGI series.

Midgut volvulus, although rare, can cause high duodenal obstruction. In these cases, the abdominal radiograph can mimic the classic appearance of the double-bubble sign of duodenal atresia (the first bubble corresponds to the stomach, and the second bubble to the dilated duodenal loop). Gilbertson-Dahdal et al recommended performing an upper GI radiographic or ultrasound study to identify possible malrotation with midgut volvulus when there is delay in surgical treatment of patients with the double-bubble sign.

In most patients with malrotation, an upper GI series is easy to perform and, in experienced hands, is easy to interpret, with the following exceptions:

With complete duodenal obstruction, an upper GI series does not differentiate between the causes of proximal intestinal obstruction. In such cases, surgical exploration is indicated.

A redundant duodenum, seen in some normal individuals, can be confused with malrotation. Careful tracking of the barium shows a normal duodenojejunal junction (DJJ); if uncertainty exists, a contrast enema can confirm normal rotation if the cecum is seen in the right lower quadrant.

A false-negative diagnosis of malrotation with midgut volvulus can lead to delays in the diagnosis and, possibly, death or severe morbidity. False-negative diagnoses result from misinterpretation of a finding as a normal variant.
A false-positive diagnosis can lead to an unnecessary laparotomy and a delay in obtaining the correct diagnosis. False-positive conclusions occur when there is failure to recognize normal variations, such as redundant or wandering duodenum, duodenum inversum, or mobility of the duodenojejunal junction (DJJ). The DJJ can be mobile in children younger than 4 years, and displacement can occur in cases of gaseous distention of the stomach or bowel, as well as intra-abdominal processes that cause mass effect.

The highest sensitivities and specificities with upper GI series are in pediatric centers where operators with experience and pediatric expertise perform the examinations. If the upper GI results are in question, the examination should be repeated through a nasogastric feeding tube, or the study should be continued to determine the position of the cecum, because the cecum is abnormal in 80% of patients with malrotation.

Katz et al proposed 9 findings on upper GI series to detect subtle abnormalities. Three or more abnormalities indicated malrotation, the presence of 2 abnormalities was considered indeterminate, and 1 abnormality represented normal variation.
Findings included assessment of the location of the pylorus, 3 descriptors of the duodenojejunal junction, 3 descriptors of the segment between the inferior-most and duodenojejunal flexures, and the course and positioning of the jejunum. Long et al applied the Katz criteria in difficult-to-diagnose cases.
In their series, 9 patients with malrotation only had 1 of the Katz criteria. They suggested the possibility of malrotation and further evaluation if the jejunum is in the right upper quadrant, if the DJJ is slightly low, or if there is unusual redundancy of the duodenum. Although redundancy of the sweep can be normal, they describe features suggestive of malrotation that include the following:

Angularity or kinking of the loops (due to Ladd bands)

Malrotation of the bowel causes shortening of the mesenteric root, which predisposes to volvulus. Malrotation results from disruption of the normal embryologic development of the bowel. The midgut (middle of duodenum to the splenic flexure of the colon) develops as a long, straight tube with arterial blood flow supplied by the superior mesenteric artery.

By 12 weeks’ gestation, it normally has undergone 270-degree counterclockwise rotation (toward the right), so that the duodenojejunal junction (DJJ) is positioned in the left upper quadrant and the cecum is in the right lower quadrant.
Once in their final anatomic positions, mesenteric attachments stabilize the position of the bowel loops. If rotation is arrested at any point in the process, these loops reside in abnormal positions in the abdomen and stabilization in the abdomen may fail to occur.

The duodenojejunal loop and cecocolic loops rotate independently of one another.
Although most cases of malrotation affect both loops, cases of abnormal duodenojejunal rotation with normal cecal position (and rarely isolated cecocolic malrotation) occur.
Long et al described 7 patterns of duodenal malrotation in a series of 69 cases of surgically proven malrotation. Almost all individuals had abnormal fixation of both the duodenum and colon; however, one patient had a normal duodenum, and 4 had normal cecal positions.

Individuals diagnosed with malrotation who are believed to be at risk for volvulus, as well as those with midgut volvulus, undergo a Ladd procedure. During this procedure, the bowel is untwisted if volvulus is present; adhesive or Ladd bands are resected; the mesentery is widened; the bowel is positioned in the abdomen in a nonrotated orientation (small bowel on the right and colon on the left); and the appendix is removed. Recurrence of volvulus is reported to be less than 1% following this procedure; in cases of recurrence, it may be due to an incomplete initial procedure or decreased formation of adhesions.
The most common complication is bowel obstruction due to adhesions.

The prognosis of prenatal intestinal volvulus depends on the length of the segment involved, the level of intestinal obstruction, the presence of meconium peritonitis,  and the gestational age at birth.
In 30% of patients with midgut volvulus in one study, the only clinical sign was a sudden worsening of the general condition and abdominal distention. Of the 37 children studied, 43% developed complications, and mortality was 16%.

The position of the D3 segment behind the superior mesenteric artery in the retroperitoneum is reported to help exclude malrotation.
Taylor, however, describes one of 38 patients with surgically proven malrotation who had a normal retroperitoneal position of D3. He asserts that based on the embryologic development of the midgut, D3 may have a normal position and yet the cecum may be high in the abdomen, which results in a short mesentery and predisposition to volvulus.

In symptomatic patients with midgut volvulus who undergo computed tomography or ultrasonography, the whirlpool sign can be seen, which represents the clockwise rotation of the SMV, mesentery, and small bowel loops, twisting around the SMA. This finding is specific for volvulus. The reference point of the clock direction is the appearance on an axial slice of a CT scan where the anterior abdominal wall is at 12 o’clock and the spine is at 6 o’clock. These patients may also have a dilated proximal duodenum.

Case reports of counterclockwise swirling, also known as the barber-pole sign, have been infrequently described in cases of surgically proven midgut volvulus.
A normal variant that may be mistaken for swirling of the mesentery is the appearance of the proximal left jejunal veins as they course in a counterclockwise direction to join the superior mesenteric vein. Sodhi et al described 72 patients in a series of 200 consecutive pediatric abdominal CTs, performed for reasons other than evaluation for malrotation and volvulus, with counterclockwise swirling of the proximal mesenteric veins ranging from 90 degrees to more than 270 degrees.
In the Taylor series, this pattern was similarly described in 10% of patients without malrotation.