Meconium plug syndrome (also termed functional immaturity of the colon, colonic immaturity, small left colon syndrome, and functional colonic obstruction ) is a transient disorder of the newborn colon characterized by delayed passage (>24-48 hr) of meconium and intestinal dilatation. The incidence is one in 1,000 births, and it is associated with Hirschsprung disease in 40% of cases and cystic fibrosis in 40% of cases.

(See the image below.) 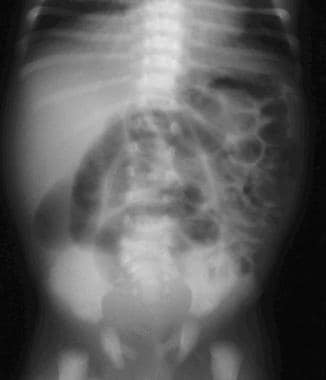 Supine frontal view of the abdomen in a newborn with meconium plug syndrome demonstrates multiple dilated loops of bowel but no rectal gas.

Contrast enema demonstrates the retained meconium as a filling defect or plug that produces a double-contrast effect. Small left colon syndrome is a subset of meconium plug syndrome in which an enema demonstrates an apparent transition zone between the dilated and the normal to decreased caliber distal colon at the splenic flexure. (See the image below.) 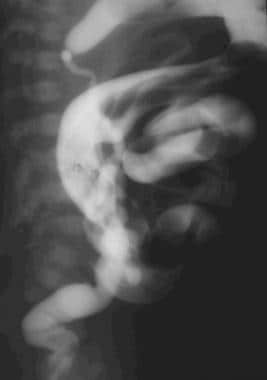 A lateral view from contrast enema in a newborn demonstrates a normal-to-decreased caliber “empty” distal colon and dilated proximal bowel containing multiple plugs. The child responded clinically and radiographically to a single enema.

The initial imaging modality is plain film radiography, which includes supine and horizontal beam views (left lateral decubitus or cross-table lateral) of the abdomen. Follow plain films with contrast enema. Barium can be used but has been replaced by water-soluble contrast agents in most practices. Historically, Gastrografin was employed, which is a hypertonic solution containing both wetting and detergent agents. However, complications secondary to hyperosmolarity occurred that produced dehydration. Evidence exists that detergent and wetting additives may be toxic, and their possible therapeutic effect remains unproven.

Meconium plug syndrome is a diagnosis of exclusion. Contrast enema usually eliminates congenital small bowel obstruction and rare colon abnormalities (such as atresia and duplication). The primary differential consideration is Hirschsprung disease, which is diagnosed eventually in approximately 10-30% of patients with apparent meconium plug syndrome.

In a study of 33 very low birthweight infants with meconium obstruction, ultrasound-guided water-soluble contrast enema had an overall success rate of 54.5% (18 of 33 successful cases). Patients in the success group had statistically significant older gestational age, larger birth weight, and higher body weight on the day of the procedure. Retrial of contrast injection during the procedure was associated with significantly higher success than the single trial, and the presence of refluxed contrast into the distal ileum was a statistically significant predictor of success.

Rare disorders that may partially simulate meconium plug syndrome include neuronal intestinal dysplasia, visceral neuropathies, and megacystis-microcolon-intestinal hypoperistalsis syndrome, also termed Berdon syndrome.
However, radiographic and clinical features in these diseases usually are distinguished readily from meconium plug syndrome. A more common problem is an infant with sepsis or a metabolic disorder who presents with nonobstructive ileus.