Respiratory distress syndrome (RDS) of the newborn is an acute lung disease caused by surfactant deficiency, which leads to alveolar collapse and noncompliant lungs. Previously known as hyaline membrane disease, this condition is primarily seen in premature infants younger than 32 weeks’ gestation.

RDS is usually diagnosed with a combination of clinical signs and/or symptoms, chest radiographic findings, and arterial blood gas results. The radiographic features of RDS are seen in the images below. A normal film at 6 hours of life excludes the diagnosis of RDS. 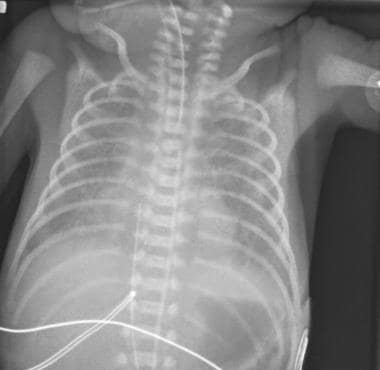 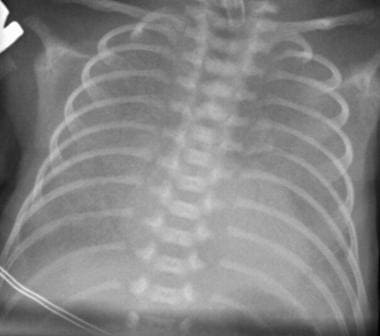 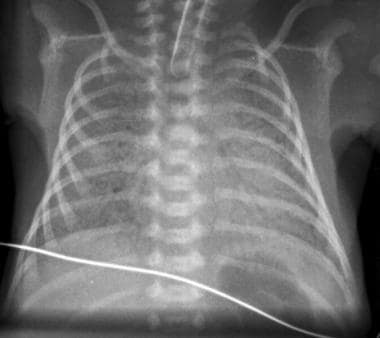 The incidence and severity of RDS are inversely related to gestational age. RDS is the most common cause of respiratory failure during the first days after birth. In addition to prematurity, other factors contributing to the development of RDS are maternal diabetes, cesarean delivery without preceding labor,
being the second born of twins, perinatal asphyxia, perinatal infection, and patent ductus arteriosus.

The outcome of patients with RDS has improved with the increased use of antenatal steroids to improve pulmonary maturity, early postnatal surfactant therapy to replace surfactant deficiency, and gentle techniques of ventilation to reduce barotrauma to the immature lungs.

A Cochrane meta-analysis showed that antenatal corticosteroid therapy to women at risk of preterm delivery reduces the incidence of RDS, neonatal death, and intraventricular hemorrhage.

Recent meta-analyses have confirmed that exogenous surfactant treatment decreases overall morbidity and mortality in preterm newborns with RDS. A study by Soll et al demonstrated that multiple doses of animal-derived surfactant extract provided greater improvement than single-dose therapy with regard to oxygenation and ventilatory requirements, reduced risk of pneumothorax, and improved survival.
Efforts are ongoing to identify the optimal delivery method and dosages.

Central positive airway pressure (CPAP) is used as an adjunct therapy given after surfactant therapy and helps to prevent atelectasis and apnea.