The following 2 radiographs are from the same infant with congenital cystic adenomatoid malformation: 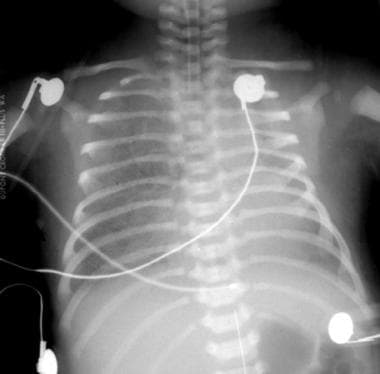 Initial anteroposterior radiograph of the chest in a patient with congenital cystic adenomatoid malformation on the first day of life, with dense lungs and a suggestion that the right lung is slightly more voluminous than the left lung. 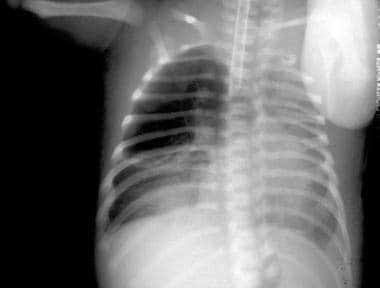 On the second day of life (same patient as in previous image), an anteroposterior radiograph shows physiologic fluid resorbed from an area of congenital cystic adenomatoid malformation and replaced with an air-containing cystic area occupying the right upper lung.

CAM is subdivided into 3 major types
:

Type I lesions, the most common, are composed of 1 or more cysts measuring 2-10 cm in diameter. Larger cysts are often accompanied by smaller cysts, and their walls contain muscle, elastic, or fibrous tissue. Cysts are frequently lined by pseudostratified columnar epithelial cells, which occasionally produce mucin. Mucinogenic differentiation is unique to this subtype of CAM.

Type II lesions are characterized by small, relatively uniform cysts resembling bronchioles. These cysts are lined by cuboid-to-columnar epithelium and have a thin fibromuscular wall. The cysts generally measure 0.5-2 cm in diameter.

CAM receives its blood supply from the pulmonary circulation and is not sequestered from the tracheobronchial tree. However, type II and III lesions can occasionally coexist with extralobar sequestration, and in such cases, they may receive systemic arterial supply. CAM may also occur in combination with a polyalveolar lobe. A polyalveolar lobe is a form of congenital emphysema with increased number of alveoli with normal bronchi and pulmonary vasculature. CAM usually occurs early in fetal life, whereas polyalveolar lobe occurs late.

CAM is differentiated from other congenital cystic disease by 5 characteristics
:

Absence of bronchial cartilage (unless it is trapped within the lesion)

Overproduction of terminal bronchiolar structures without alveolar differentiation, except in the subpleural areas

Massive enlargement of the affected lobe that displaces other thoracic structures

CAM may be initially detected during prenatal ultrasonography.
After birth, chest radiography should be performed first.
Although lesions remain filled with fluid, postnatal sonography can be used for a more detailed assessment, particularly in type III lesions. Once lesions are air-filled, CT scanning is necessary for determination of the type and extent of the lesions.

Most often, the diagnosis can be made by using plain radiographs. CT scans may be used to diagnose confusing cases. Overlapping CT features exist among cases of CAM, pulmonary sequestration, bronchogenic cyst, and other foregut malformations. CT is more accurate than radiography or ultrasonography in classifying the type of CAM.

In a retrospective study, Scialpi et al proposed that because of similar CT scan patterns between intrapulmonary bronchogenic cyst (IBC) and type I CAM that precluded differentiation, surgical resection of all intrapulmonary cystic lesions in adults is required, as type I CAM is a precursor of mucinous bronchioloalveolar carcinoma.
In the study, of 9 patients with a histologic diagnosis of pulmonary cystic disease following surgery, 6 had IBC and 3 had type I cystic adenomatoid malformation (CAM). (See the CT Scan discussion below.)

Komori et al determined the optimal age for surgery in patients with congenital cystic lung disease is younger than 1 year. They used radionuclide imaging to assess long-term pulmonary function following lobectomy for congenital cystic lung disease in 93 infants and children. Patients who were younger than 1 year at surgery had a significantly lower mean transit time (marker for air trapping) at 5 years and 10 years postoperatively than those who were older than 1 year at surgery. Additionally, at 10 years after surgery, perfusion scintigraphy scores were higher and mean transit times were lower in patients without infection compared with patients with infection.

In a French study, Zeidan et al showed that prenatal MRI was less accurate than postnatal CT scan, which, according to the authors, remains the most reliable diagnostic modality to specify the location, extent, and type of lesions.
The authors evaluated the accuracy of prenatal MRI and postnatal CT imaging in identifying congenital cystic adenomatoid malformation and bronchopulmonary sequestration by comparison with histologic analysis. (See the CT Scan and MRI discussions below.)