Multiple definitions of oligohydramnios are used because no ideal cutoff level for intervention exists.

Oligohydramnios is characterized by the following features: 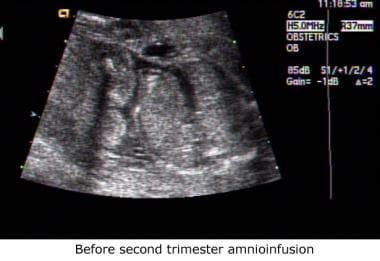 Sonogram obtained before second-trimester amnioinfusion. This fetus has bilaterally absent kidneys consistent with a diagnosis of Potter syndrome. The cystic structures in the renal fossae are most likely the adrenal glands. 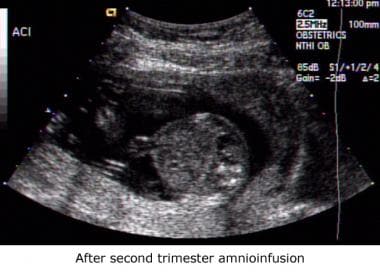 Sonogram obtained after second-trimester amnioinfusion. This fetus has bilaterally absent kidneys consistent with a diagnosis of Potter syndrome. The cystic structures in the renal fossae are most likely the adrenal glands.

The earlier in pregnancy that oligohydramnios occurs, the poorer the prognosis. Fetal mortality rates as high as 80-90% have been reported with oligohydramnios diagnosed in the second trimester. Most of this mortality is a result of major congenital malformations and pulmonary hypoplasia secondary to PROM before 22 weeks’ gestation. Midtrimester PROM (premature rupture of membranes) often leads to pulmonary hypoplasia, fetal compression syndrome, and amniotic band syndrome. The inspiration of amniotic fluid at regular intervals is probably needed for terminal alveolar development.

The assessment of amniotic fluid volume is important in pregnancies complicated by abnormal fetal growth or IUGR. AFV has been shown to be predictive in discriminating normal from decreased growth. Oligohydramnios is a frequent finding in pregnancies involving IUGR and is most likely secondary to decreased fetal blood volume, renal blood flow, and, subsequently, fetal urine output. Pregnancies complicated by severe oligohydramnios have been shown to be at increased risk for fetal morbidity.

AFV is an important predictor of fetal well-being in pregnancies beyond 40 weeks’ gestation. AFV must be closely monitored, with measurements obtained at least once per week. The diagnosis of oligohydramnios may help in identifying postterm fetuses in jeopardy.

AFV is a predictor of the fetal tolerance of labor, and it is associated with an increased risk of abnormal heart rate, meconium-stained amniotic fluid, and cesarean delivery. An increased incidence of cord compression is associated with oligohydramnios; this can lead to variable decelerations, with cord occlusion as the proximate cause of fetal distress.

Hydration (intravenous and oral) has been found to significantly improve the volume of amniotic fluid in third-trimester pregnancies with isolated oligohydramnios.
For more information, see Polyhydramnios and Oligohydramnios.