In women whose sonogram shows a subchorionic hematoma, the outcome of the fetus depends on the size of the hematoma, the mother’s age, and the fetus’s gestational age. Rates of miscarriage increase with advancing maternal age and increasing size of hematoma. Late first- or second-trimester bleeding also worsens the prognosis. The presence of sonographically detected subchorionic hemorrhage (subchorionic hematoma) increases the risk of miscarriage, stillbirth, abruptio placentae, and preterm labor.

The subchorionic hematoma often regresses, especially if it is small or moderate in size. Large hematomas, which strip at least 30-40% of placenta away from endometrium, may enlarge further, compressing the gestational sac and leading to premature rupture of membranes with consequent spontaneous abortion.

Small hematomas on the surface of the placenta (subamniotic hemorrhage) are common at 18 to 20 weeks on ultrasound, but hemorrhages identified beneath the placenta, at the edge of the placenta, or behind an isolated area of the fetal membranes is of greater significance. Large intrauterine hematomas in the second trimester may compromise maternal health.

In a meta-analysis of 7 studies that included 1735 women with subchorionic hematoma, hematomas were associated with an increased risk of early and late pregnancy loss, abruption, and preterm premature rupture of membranes. Sequela of subchorionic hemorrhage included one extra spontaneous abortion per 11 women and one extra stillbirth per 103 women.

Massive subchorionic thrombohematoma (Breus’ mole) has been diagnosed in the second trimester by ultrasound assessment of the placenta. Normal fetal growth and umbilical artery Doppler waveforms have been described as being associated with perinatal survival.

The frequency of subchorionic hematoma has been shown to be high with infertility treatment by in vitro fertilization (IVF) (22.4%) versus non-IVF (11%). Frozen-thawed embryo transfer, parity of 1 or greater, and blastocyst transfer may be contributing factors in IVF patients.

Ultrasonography is the imaging modality of choice for subchorionic hemorrhage (subchorionic hematoma) because it can be performed rapidly at the patient’s bedside and because it has no known risk, as with radiation.

The sensitivity of sonography is low and varies between 2% and 20%, as blood may pass vaginally and not collect in the subchorionic space. Hematomas may also appear isoechoic relative to the placenta. 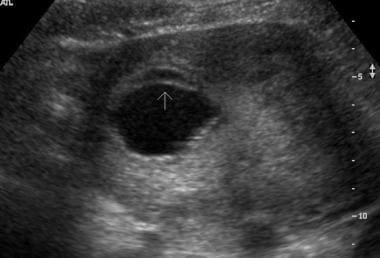 Transverse endovaginal scan of the uterus in a 45-year-old woman in 8th week of gestation. Small subchorionic hematoma is anterior to a gestational sac. 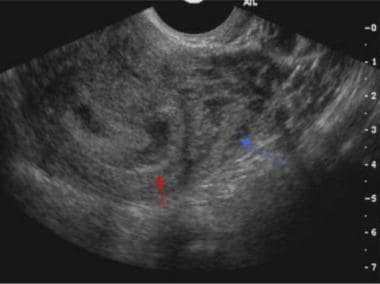 Sagittal endovaginal scan of the uterus demonstrates a small subchorionic hematoma (red arrow) in a 26-year-old woman in the 7th week of gestation. Also note the prominent retroplacental veins (blue arrow), which are normal in pregnancy. 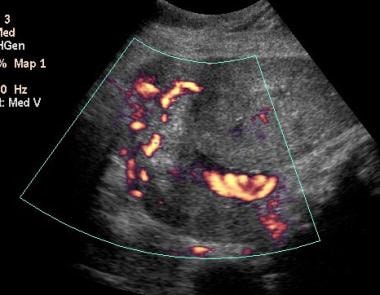