High-resolution ultrasonography allows the most important imaging signs of cervical incompetence to be determined. The parameters assessed include the cervical length and the appearance of the internal os.
Previously, hysterosalpingography (HSG) was used to diagnose an incompetent cervix. Evidence of a funnel-shaped cervix or a cervix appearing as an inverted sac with an increased diameter of internal uterine orifice were seen on HSG.

See the ultrasound images below regarding cervical incompetence. 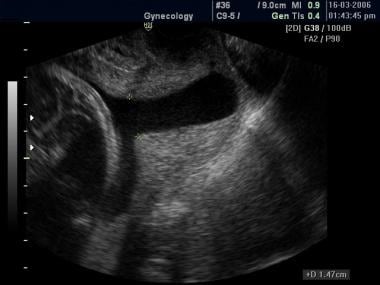 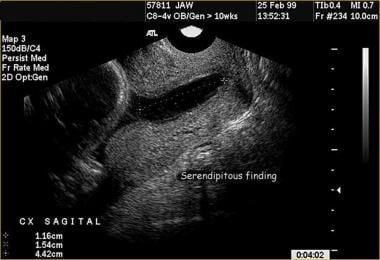 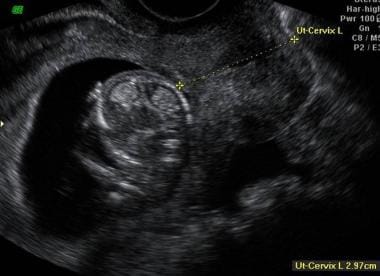 Transvaginal sonogram shows a slightly shortened cervix at 14 weeks of gestation. The internal os is closed and there is no funneling seen. 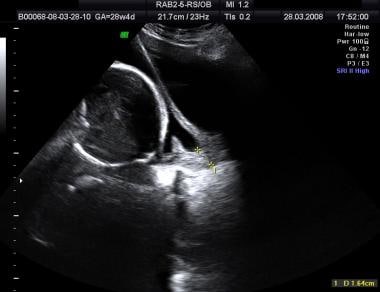 The radiologist should be able to recognize these imaging findings and report them to the referring clinician. The clinician may then select patients who should undergo serial ultrasound studies from the start of the second trimester of pregnancy or determine suitable treatment based on ultrasound findings suggestive of incompetence before clinical examination. Anticipated clinical and technological improvements in 3-dimensional ultrasonography and MRI may hopefully depict those changes in the cervical connective structures that are responsible for incompetence.

Ultrasonography remains an operator-dependent modality, and many pitfalls are possible with regard to imaging technique or interpretation.
Ultrasonographic results correlate well with findings from digital examination. However, the consistency of the cervix (soft or firm), an important sign of cervical ‘change’ that is suggestive of impending miscarriage, can be assessed only digitally.

Ultrasound measurement of the cervix should be performed by a standardized method. The method described by Colombo and Iams has been widely accepted and used in obstetrics.
The examination is performed with the bladder empty. A transvaginal probe (5-7 MHz) is introduced into the anterior vaginal fornix, taking care to avoid undue pressure on the cervix to avoid distorting the anatomy. The whole length of the sonolucent endocervical mucosa is identified in the sagittal section, and the image is magnified to occupy 75% of the screen. Calipers are placed from the triangular echodense area marking the external os to the V-shaped indentation that marks the internal os; this distance is measured in a straight line.

MRI is expensive and currently has somewhat limited availability. In addition, MRI poses potential hazards in patients with ferromagnetic foreign bodies, in those with some cardiac pacemakers, and in those with claustrophobia.

In patients with a history of pregnancy loss, it is prudent to establish a baseline cervical-length measurement at 12-14 weeks of gestation. In addition, follow-up ultrasonograms should be obtained every 1-2 weeks, depending on the findings on ultrasound or from recent examination or depending on the patient’s symptoms.

Elective cerclage at 14-16 weeks: in high risk cases, as identified from the history of previous mid-trimester pregnancy losses

Emergency or rescue cerclage: can be used up to 25-26 weeks, in response to an open cervix with bulging membranes; clearly, there are risks of premature rupture of membranes in this situation, and the operation is often unsuccessful in prolonging the pregnancy for a considerable period of time, but it may allow for time to administer steroids and transfer to a neonatal ICU center

Cervical cerclage in response to shortened cervical length (as detected by ultrasound): there seems to be increasing evidence that this may be a reasonably successful option

Papanna et al conducted a multicentric, retrospective cohort study with 163 patients with a short cervix before fetoscopic laser photocoagulation (FLP) for twin-to-twin transfusion syndrome. The purpose of this study was to evaluate the benefit of cervical cerclage for cervical length of at least 25 mm at the time of FLP for twin-to-twin transfusion syndrome. Seventy-nine of the patients (48%) had cerclage placement at the surgeon’s discretion. The outcome measures that were compared were gestational age at delivery and perinatal mortality rates for patients with cerclage and those who were treated conservatively. The authors concluded that the benefit of cerclage for patients with short cervix before FLP remains questionable.

In a Danish study, the recurrence rate of second trimester miscarriage or extreme preterm delivery was 28% in women with cervical insufficiency without cerclage; prophylactic cerclage was associated with a significant reduction in recurrence.

In the nongravid state and in the first trimester (see the images below), the cervix is usually difficult to distinguish from the lower uterine segment. From the middle trimester onward, the amniotic sac clearly defines the internal os. 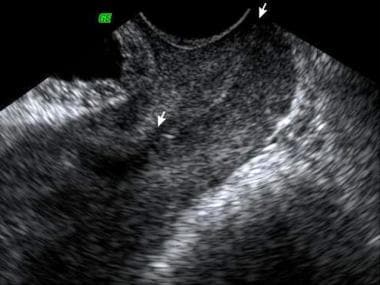 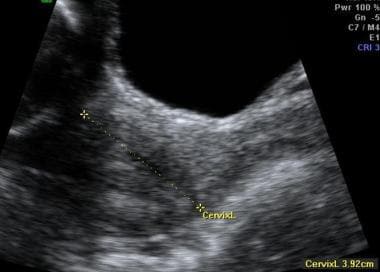 Nomograms have been developed for cervical length in twin and triplet pregnancies; these help in identifying patients at high risk for preterm labor.

The cervix at term

Several groups of researchers have used ultrasonography to evaluate the favorability and inducibility of cervix, and a scoring system has been proposed. Parameters such as cervical length, cervical diameter, and the appearance of the internal os are scored. Among these indices, the presence of funneling and a short cervix is associated with a shortened duration of induced labor.

Cervical incompetence is defined as cervical dilatation without uterine contractions. It is a functional condition associated with a history of recurrent and usually painless, spontaneous second-trimester abortions. The typical clinical scenario is that of ‘silent’ or ‘painless’ dilatation of the cervix, leading to bulging fetal membranes extruding through the external os.

Cervical incompetence is a frequent cause of inevitable miscarriage in the second trimester, and it is often associated with a poor fetal outcome. In a multiparous woman, a history of previous miscarriages may raise the suspicion for cervical incompetence. However, in a primigravida without previous risk factors, early diagnosis may not be possible. Nevertheless, early diagnosis in such primigravida women would allow for prompt treatment with an improved prognosis.

The diagnosis is usually based on the patient’s history and findings from physical examination, with the aid of ultrasonography.

Preterm labor is a frequent cause of admission to the hospital, but most cases of preterm labor are diagnosed on the basis of only clinical criteria, and only a few patients admitted to the hospital with suspected preterm labor ultimately have a preterm delivery. Therefore, sensitive methods for identifying patients who are genuinely at high risk for preterm birth are needed.

Developments such as ultrasound measurement of cervical length and fetal fibronectin (FFN) measurement may improve prediction of the risk of actual preterm delivery. FFN is a glycoprotein found in amniotic fluid, placental tissue and the deciduas basalis. It is normally found in the cervicovaginal secretions before 16 weeks of pregnancy, a time at which the fusion between the amnion and the decidua is not yet completed. It is not normally present in the cervicovaginal secretions after 22 weeks. It appears in the secretions due to disruption of the chorionic-decidual interface and is often secondary to infection.

In women being screened for preterm labor, FFN provides a good negative predictive test (ie, a negative FFN rules out preterm labor). However, FFN cannot be used as a test for cervical incompetence because, typically, the pregnancy loss in these cases is around 16-20 weeks, a time when FFN may be found in the cervicovaginal secretions in normal conditions.

Future developments are likely to be based on anatomic changes as well as functional criteria. New techniques are being developed to evaluate cervical distensibility, to permit noninvasive measurement of cervical collagen content (eg, by using light-induced fluorescence of cervical collagen), or even to enable direct assessment of the changes with cervical water-content MRI. Although correlations have been found between these parameters and the risk of preterm labor, widespread clinical studies are required to determine true predictive values for these new methods in clinical practice.

A dynamically changing cervix is a dramatic finding that can be seen during ultrasonography. The cervix shows varying degrees of funneling of the internal os over time in association with vigorous closing and opening of the cervix. These cervical changes occur in the absence of uterine contractions.

Although most patients with a spontaneously changing cervix deliver preterm, this is not a sign of imminent delivery. With conservative management, delivery may be delayed in some patients. Measurements obtained when the cervix appears most abnormal are most predictive of early delivery.

During transvaginal ultrasonography in twin gestations, a cervical measurement of greater than 35 mm at 24-26 weeks helps in identifying patients who are at low risk for delivery before 34 weeks of gestation.

In twin gestations, the use of ultrasound and clinical criteria to select patients for cerclage helped prevent the birth of the youngest and smallest of the twins and significantly decreased perinatal mortality.
Routine cerclage is not recommended for twin gestations, but multifetal gestations may benefit from sonographic surveillance for cervical incompetency.