Primary lymphoma of bone (PLB) is a rare, malignant, neoplastic disorder of the skeleton. In 1939, it was described as a distinct clinical condition by Parker and Jackson.
Later that year, Ewing included it among the bone tumors listed in the Bone Sarcoma Registry, under the heading of reticulum cell lymphosarcoma.
In 1963, the term PLB was introduced by Ivins and Dahlin.

After biopsy of the bone lesion confirms the diagnosis of lymphoma, computed tomography (CT) scanning of the chest, abdomen, and pelvis is needed to exclude a primary, soft-tissue origin or distant disease. The CT scan may be combined with fluorodeoxyglucose (FDG) positron emission tomography (PET). Technetium-99m (99mTc) bone scintigraphy also can be used to look for additional sites of involvement that may be clinically silent.
Once soft-tissue origin and distant disease are excluded, magnetic resonance imaging (MRI) is the preferred examination to stage the extent of disease within the affected bone.

See the images of bone lymphoma below. 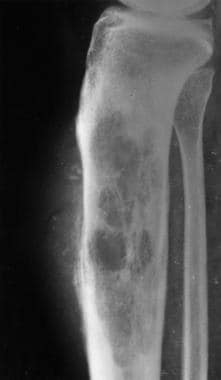 A 57-year-old woman with knee pain. Lateral radiograph of the right lower leg reveals a large, permeative, lytic lesion with a moth-eaten appearance in the metadiaphysis of the tibia. Note the cortical destruction, aggressive periosteal reaction, and soft-tissue mass. 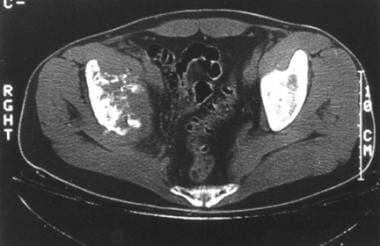 A single primary bone site with or without regional nodes

This author would consider only groups 1 and 2 to represent primary lymphoma of bone. Groups 3 and 4 would most likely represent metastatic involvement of bone.