Spinal trauma is classified according to the mechanism of injury and the presence or absence of stability. Various imaging modalities, including conventional radiography, conventional tomography, computed tomography, and magnetic resonance imaging, are available for assessment of the injured spine (see the images below). 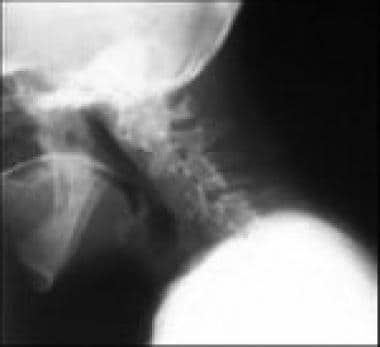 Anterior subluxation of C4 over C5 is associated with an increase in facet joint gap/distraction. This is likely due to a hyperflexion mechanism. Disruption of three columns and instability needs to be suspected in this case until proven otherwise.

There is a burst wedge compression fracture of C4 consistent with an axial loading mechanism. In addition, significant flexion is likely, as there is wedging and an anterior-inferior bony fragment that can be considered to be a flexion teardrop fracture. There is retropulsion/buckling of the posterior cortex of the body of C4 and mild kyphosis compromising the central canal.

There is a burst wedge compression fracture of C4 consistent with an axial loading mechanism. In addition, significant flexion is likely, as there is wedging and an anterior-inferior bony fragment that can be considered to be a flexion teardrop fracture. There is retropulsion/buckling of the posterior cortex of the body of C4 and mild kyphosis compromising the central canal. 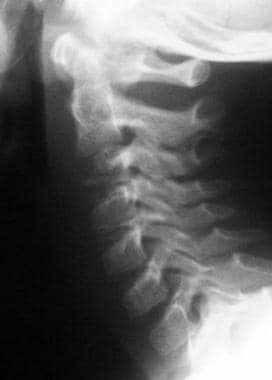 Flat appearance of the body of C3 is shown. This appearance is due to a pathologic fracture of a diseased vertebra called vertebra plana.

With recent developments in imaging techniques, an appropriate choice has to be made quickly to diagnose cervical trauma. Clinical examination is used for diagnosis in the small group of patients with cervical trauma who do not require any imaging. Cervical trauma is seen at multiple levels in about 10% of cases, so imaging should include the upper and lower cervical hinges if treatment is to be instituted.

The quality of standard radiographs varies greatly. Their negative quality and predictive value decrease as the severity of the injury increases. CT scanning is the most efficient technique for not only detecting but also formally eliminating an injury. The recommendations have evolved some in this regard over the past several years in the trauma literature. Whereas plain film was the preferred initial assessment modality throughout the 20th century, CT is now the preferred modality for the initial evaluation.

MRI is indicated in patients with a neurologic deficit. MRI is also indicated in symptomatic patients with normal radiography findings when a bone bruise is suspected.
Ligamentous injuries, which are often missed on conventional radiographs and CT, represent an indication for dynamic MRI. MRI is indicated in cervical fractures that have spinal canal involvement, clinical neurologic deficits, or ligamentous injuries. MRI provides the best visualization of the soft tissues, including ligaments, intervertebral disks, spinal cord, and epidural hematomas.

A portable crosstable lateral radiograph in the emergency department is frequently inadequate and needs to be abandoned, because, often, it is insufficient, requires several repeats, and cannot exclude a fracture. Once a clinical decision is made to evaluate a patient with radiography, adequate views must be obtained in the radiology department. The patient’s neck should remain immobilized until a full cervical spine series can be obtained, although initial films may be taken through the cervical collar.

The most common reason for a missed cervical spine injury is a cervical spine radiographic series that is technically inadequate.
The incidence of delayed diagnosis ranges from 5%-20%.

In a study by Platzer et al, the diagnostic failure rate was 4.9%. In 44% of such cases, radiologic misinterpretation was responsible for the delayed diagnosis; in 28%, incomplete sets of radiographs were responsible; in 22%, the injury was missed because inadequate radiographs did not show the level of the injury; and, in one case (6%), the treating surgeon did not see the radiographs. The authors concluded that, for optimal examination of patients with suspected cervical spine injuries, a specific diagnostic algorithm is needed, including complete sets of proper radiographs with functional flexion/extension views, secondary evaluation of the radiographs by experienced staff, and further radiologic examinations (CT, MRI) if evaluation of standard views is difficult.