An osteoblastoma is an uncommon primary neoplasm of the bone that has clinical and histologic manifestations that are similar to those of an osteoid osteoma; therefore, some consider the 2 lesions to be variants of the same disease, with osteoblastoma representing a giant osteoid osteoma. However, an aggressive type of osteoblastoma has been recognized, making the relationship between the lesions less clear.

See the osteoblastoma images below. 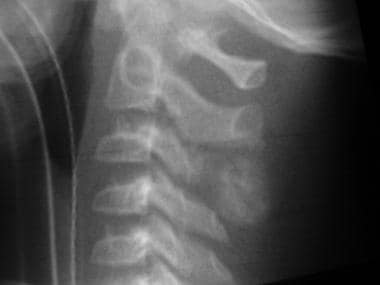 Lateral radiograph of the cervical spine in a 10-year-old boy. The spinous process of the C3 vertebra is expanded by a mass with ossific matrix. 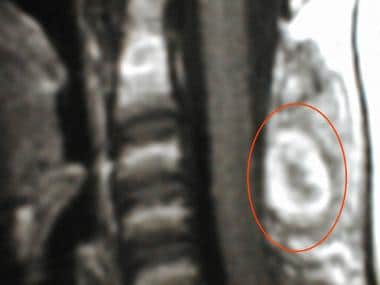 T1-weighted gadolinium-enhanced sagittal magnetic resonance image of the spine in a 10-year-old boy. This image reveals contrast enhancement of a mass that is occupying the posterior elements of the C3 vertebra. 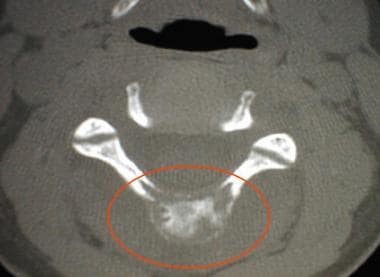 Computed tomography scan of the cervical spine in a 10-year-old boy. This image reveals a lytic lesion that involves the posterior elements of the C3 vertebra. Cortical expansion of the spinous process and an ossified matrix are noted; these findings are typical and classic findings in cases of osteoblastomas.

Osteoblastoma is typically seen in the second decade of life, with a male predilection.
Approximately 40% of all osteoblastomas are located in the spine.
The tumors usually involve the posterior elements, and 17% of spinal osteoblastomas are found in the sacrum. The long tubular bones are another common site of involvement, with a preponderance in the lower extremities. Osteoblastoma of the long tubular bones is often diaphyseal, and fewer are located in the metaphysis. Epiphyseal involvement is extremely rare. Other reported sites include the bones of the hands, wrists, feet and ankles
; the skull and facial bones
; the ribs
; and the sternum, clavicles, scapulae, patellae, and pelvis.

The etiology of osteoblastoma is unknown. Histologically, osteoblastomas are similar to osteoid osteomas, producing both osteoid and primitive woven bone amidst fibrovascular connective tissue. Although the tumor is usually considered benign, a controversial aggressive variant has been described in the literature, with histologic features similar to those of malignant tumors such as osteosarcomas.

Patients with osteoblastomas usually present with pain of several months’ duration. In contrast to the pain that is associated with osteoid osteoma, the pain of an osteoblastoma is usually less intense, is usually not worse at night, and is not relieved readily with salicylates. If the lesion is superficial, the patient may have localized swelling and tenderness. Spinal lesions can cause painful scoliosis, although this is less common with osteoblastomas than with osteoid osteomas. In addition, lesions may mechanically interfere with the spinal cord or nerve roots, producing neurologic deficits.

The preliminary radiologic workup should consist of radiography at the site of the patient’s pain.
In most patients, radiographic findings are not diagnostic of osteoblastoma; therefore, further imaging is warranted. Computed tomography (CT) scanning is often necessary to support clinical and conventional radiographic findings that are suggestive of osteoblastoma and to better define the margins of the lesion for potential surgery.
CT scans are best used for the further characterization of the lesion with regard to the presence of a nidus and matrix mineralization.
A CT scan examination that is performed with the intravenous administration of a contrast agent poses the risk of a patient’s allergic reaction to the contrast material.

Magnetic resonance imaging (MRI) aids in the detection of nonspecific reactive marrow and soft-tissue edema.
This modality best defines soft-tissue extension, although the finding is not typical of osteoblastoma. The lengthy duration of an MRI examination and a history of claustrophobia in some patients limit the use of MRI.

Bone scintigraphy demonstrates abnormal radiotracer accumulation at the affected site, substantiating clinical suspicion, but this finding is not specific for osteoblastoma.
In many patients, biopsy is necessary for confirmation of the diagnosis.

Although osteoblastomas demonstrate an increased radiotracer accumulation on bone scans, the tumors’ appearance is nonspecific, and it is difficult to differentiate these lesions from those due to other etiologies that involve increased radiotracer accumulation in the bone. Therefore, bone scans are only useful in conjunction with other radiologic studies and are best not used alone.

The major diagnostic problem is in differentiating malignant or aggressive osteoblastoma from osteosarcoma on the basis of the pathologic features because the diagnosis markedly changes treatment in patients.

Most of the medical and/or legal pitfalls that are associated with osteoblastomas result from the often nonspecific radiographic appearance of these tumors. In many patients, analysis of biopsy specimens is necessary for a definitive diagnosis. If a radiologist is asked to perform a biopsy in a suspected osteoblastoma, the orthopedic surgeon should be consulted first.

For patient education information, see the Cancer and Tumors Center.