Primary hyperparathyroidism affects approximately 0.3% of the population, with about 90% of patients having a single parathyroid adenoma and 10% having multigland hyperplasia or multiple adenomas. In rare cases, patients are found to have parathyroid carcinoma.

Historically, the disorder was marked by characteristic skeletal changes, nephrolithiasis, and neuromuscular dysfunction.
Primary hyperparathyroidism is now a different entity. Since the advent of chemical screening with an autoanalyzer in the 1960s, most cases are discovered in asymptomatic patients with hypercalcemia.

See the radiograph depicting hyperparathyroidism below.

Radiograph of the proximal tibia and fibula. Diffuse demineralization attributed to trabecular resorption is the most common plain radiographic sign of primary hyperparathyroidism.

To image the parathyroid glands before a repeat operation for recurrent or persistent disease, technetium-99m sestamibi (99mTc MIBI) scanning and magnetic resonance imaging (MRI) are the preferred imaging modalities because of their high sensitivities in depicting ectopic or mediastinal glands. Tc-99m MIBI imaging has a sensitivity of 70-95% in depicting parathyroid tumors, and this modality allows 3-dimensional (3-D) imaging with anterior-to-posterior localization of the tumor. Studies reveal equal sensitivities of 99mTc MIBI imaging and MRI in the localization of abnormal glands before a repeat surgery, with sensitivities of 82-85%. By combining the 2 modalities, the sensitivity increases to 94%.

Ultrasonography may be preferred for initial preoperative tumor localization, if desired by the surgeon, because of this technique’s low risk, low cost, and high sensitivity in depicting parathyroid glands that are not ectopic or in the mediastinum.

However, many surgeons believe that the initial 4-gland exploration enables a 95% cure rate with little morbidity and that initial preoperative localization provides no improvement in the outcome. Some surgeons advocate initial localization to guide directed dissection, obviating bilateral exploration. Opponents argue that the sensitivities of imaging modalities are not sufficient and that parathyroid glands can be missed in an unacceptable number of patients.

Fluorine 18 (18F) fluorocholine (FCH)  PET/MR imaging has been show to provide localization of adenomas with high accuracy when ultrasound or Tc-99m sestamibi scintigraphy results are negative or inconclusive.

The diagnosis of primary hyperparathyroidism is made by means of the laboratory confirmation of an elevated PTH level in the setting of hypercalcemia.

Radiologically, radiographs may yield the most specific findings that are consistent with the disorder, and radiography is the preferred examination when the clinical findings suggest primary hyperparathyroidism. Radiographs of the hands may yield the diagnostic finding of subperiosteal resorption, which is virtually pathognomonic for the disease. (See the images below.) 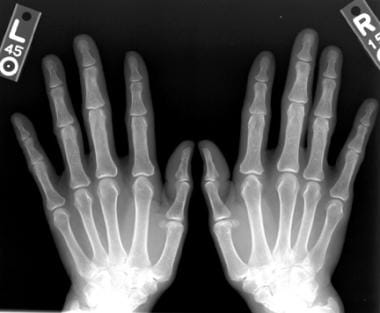 Bilateral anteroposterior (AP) radiographic views of the hands in a patient with multiple endocrine neoplasia syndrome type 1 (MEN 1) and primary hyperparathyroidism. These images show subperiosteal bone resorption along the radial aspects of the middle phalanges. 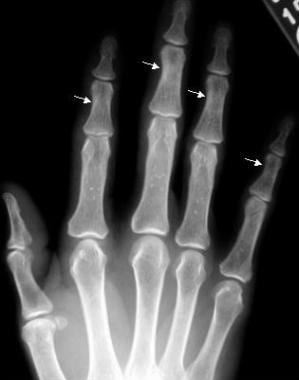 Anteroposterior radiographic view of the right hand in a patient with multiple endocrine neoplasia syndrome type 1 (MEN 1) and primary hyperparathyroidism (same patient as in the previous image). This image shows subperiosteal bone resorption along the radial aspects of the middle phalanges (arrows). 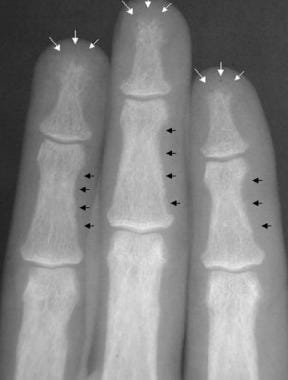 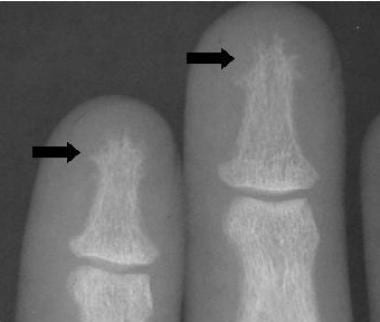 Radiograph of the phalanges in a patient with primary hyperparathyroidism. This image demonstrates subperiosteal resorption that has resulted in severe tuftal resorption (arrows).

If radiographs of the hands reveal no abnormalities, other sites are unlikely to demonstrate abnormal findings. Dual-energy x-ray absorptiometry (DXA) and quantitative CT (QCT) scanning may provide evidence of osteoporosis that is consistent with the diagnosis; however, the finding is nonspecific for primary hyperparathyroidism.

Radiographs of the hand may yield the pathognomonic finding of subperiosteal resorption, which is consistent with a diagnosis of primary hyperparathyroidism. However, other findings on radiographs are not specific for this disorder. In addition, DXA and QCT scanning are the preferred diagnostic modalities for the evaluation of osteoporosis, which is one of the most common findings in patients with primary hyperparathyroidism. However, osteoporosis may be associated with a host of other diagnoses; therefore, the specificity of this condition may be limited.

Currently, the diagnosis of primary hyperparathyroidism is primarily based on the laboratory confirmation of elevated PTH concentrations in the setting of an increased calcium level.

Preoperative parathyroid biopsy should be avoided.

Minimally invasive parathyroidectomy is not routinely recommended for known or suspected multigland disease.

Clinically relevant thyroid disease should be assessed preoperatively and managed during parathyroidectomy.

Patients should be observed postoperatively for hematoma, evaluated for hypocalcemia and symptoms of hypocalcemia, and followed up to assess for cure defined as eucalcemia at more than 6 months.

Calcium supplementation may be indicated postoperatively.