Gout is caused by the presence of monosodium urate monohydrate crystals in the joint space and soft tissue that can result in debilitating illness characterized by recurrent episodes of pain and joint inflammation. All patients with gout have hyperuricemia, but gout attacks are not caused by the level of uric acid but by acute changes in the uric acid level.

Primary gout is related to underexcretion or overproduction of uric acid, which is often associated with dietary excesses or overuse of alcohol and metabolic syndrome. Secondary gout is related to medications or conditions that cause hyperuricemia, such as myeloproliferative diseases and their treatment, hyperproliferative skin disorders, enzymatic defects, and renal failure.

The American College of Rheumatology/European League Against Rheumatism Collaborative Initiative has noted that gout is the most common form of inflammatory arthritis, with a prevalence of 3.9% in the United States, 0.9% in France, 1.4–2.5% in the United Kingdom, 1.4% in Germany, and 3.2% (European ancestry)–6.1% (Maori ancestry) in New Zealand.

Various noninvasive imaging modalities such as radiography, ultrasonography, conventional (single‐energy) CT, dual energy CT, and magnetic resonance imaging (MRI), have all been used for the evaluation and diagnosis of gout.

Plain film radiography may be used to evaluate gout; however, radiographic imaging findings generally do not appear until after at least 1 year of uncontrolled disease. The classic radiographic finding of gout late in disease is that  of  punched-out or rat-bite erosions with overhanging edges and sclerotic margins.

Nuclear medicine studies can be used as a tool to measure the extent of gouty arthritis and to confirm clinically suspected disease. Characteristic findings include increased activity in the affected areas in all phases of a triple-phase bone scan.

Ultrasonography for the diagnosis of gout has advantages in that it is easily available and portable and doesn’t require ionizing radiation. However, its limitation include being unable to image deep structures or joint and is highly operator dependent.
Findings include the double-contour sign (hyperechoic irregular enhancement over the surface of the hyaline cartilage) and can identify tophus deposition in and around joints, erosions, and tissue inflammation if power Doppler US is used.
According to the Agency for Healthcare Research and Quality (AHRQ), 4 ultrasound studies on gout showed sensitivities that ranged from 37-100% and specificities that ranged from 68-97%.

CT scanning can be used to study the effects of gout in areas that are hard to visualize with plain-film radiography. Many studies have been performed using dual-energy CT with good results,  providing visualization, characterization, and quantification of monosodium urate crystals.
DECT scanners are able to perform simultaneous acquisitions at 80 and 140 kVp using two separate sets of x‐ray tubes and detectors positioned 90 to 95 degrees apart, thereby differentiating materials based on their relative absorption of x‐rays at the different photon energy levels.
According to the AHRQ, DECT has shown good sensitivity and specificity for predicting gout compared with synovial fluid analysis for monosodium urate crystals, with 3 studies showing sensitivities that ranged from 85-100% and specificities that ranged from 83-92%.

The use of MRI in the radiologic examination of gout has not been extensively studied. However, this modality has excellent potential in the future study of gout. It can be used to assess inflammation, bone erosion, and cartilage damage in gout.

In a study by Perez-Ruiz et al, the ultrasound measurement of tophi appeared to be useful as an outcome measure for chronic gout.
However, the authors caution that further randomized trials should be conducted.

Gruber et al studied 21 patients suspected of having gout in 37 joints by comparing the results of DECT with ultrasonography. They concluded that both imaging techniques had comparable sensitivity for detecting gout, but that DECT had some false-negative findings.

Early radiologic findings in gout are limited to the soft tissues and involve asymmetric swelling in the affected joints. In the intermediate stage of disease, gout causes subtle changes in the bony structures on plain-film radiographs. In the periphery of affected joints, small punched-out lesions arise; obtaining 2 views is important to appreciate these subtle findings. The hallmark sign of late-phase gout is the appearance of large and numerous interosseous tophi on plain-film radiographs. Joint-space narrowing is also prominent in late-phase gout. (See the images below.) 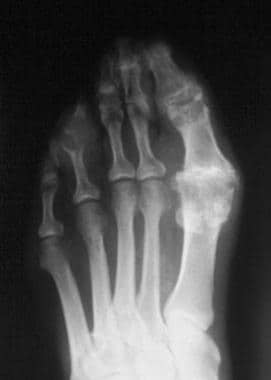 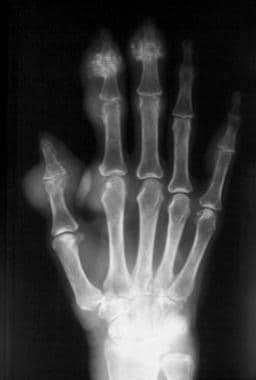 Radiograph of the hand. On this image of chronic tophaceous gouty arthritis, extensive bony erosions are noted throughout the carpal bones. Urate depositions may be present in the periarticular areas. Image courtesy of Larry Brent, MD.

For patient education see the Arthritis Center and Kidneys and Urinary System Center, as well as Gout.