An aneurysmal bone cyst is an expansile osteolytic lesion with a thin wall, containing blood-filled cystic cavities. The term aneurysmal is derived from its radiographic appearance.
Radiographs usually are adequate for diagnosis and for characterizing typical lesions. Cross-sectional imaging may be required when lesions are in unusual locations, such as the axial skeleton. Exclusion of fractures or complications from the lesion may sometimes be difficult.

The solid variant has a predilection for the axial skeleton and occurs in persons aged 20 years or younger. Solid variants have a variable radiologic appearance, which ranges from that of a completely cystic aneurysmal bone cyst to a moth-eaten appearance with cortical destruction and soft-tissue extension.

(See the image below of an aneurysmal bone cyst.). 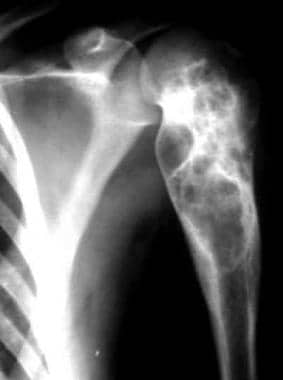 The accuracy of radiography is high, especially with lesions in the appendicular skeleton. Cross-sectional imaging may be useful in defining the extent of spinal, thoracic cage, and pelvic bone involvement but may not increase the specificity to a large extent. he classic description of an aneurysmal bone cyst includes an eccentric radiolucency and a purely lytic or, occasionally, trabecular process, with its epicenter in the metaphysis of an unfused long bone. The trabeculae in the cyst may create a soap-bubble appearance in the lesion.

Demonstration of a solitary lesion on bone scintigraphy helps distinguish an aneurysmal bone cyst from a brown tumor, a hemophilic pseudotumor, etc.
Radioisotope uptake is increased. The common pattern is the accumulation of the tracer in the periphery of the lesion, with little intensity in the center; this finding is present in about 65% of cases. The appearance of the lesion is nonspecific, with no correlation of isotopic activity to lesional size, shape, contents, osteoblastic activity, or identifiable histologic abnormality.

On angiograms, aneurysmal bone cysts are hypovascular lesions with a hypervascular localized region. This feature is contrary to that of other malignant lesions, such as osteosarcoma and chondrosarcoma, which have gross hypervascularity. Hypervascular regions in aneurysmal bone cysts may affect the prognosis, because the number and size of the lesions are positively correlated with the likelihood of lesional recurrence after treatment.

Bush et al, in a retrospective study of 5 patients with large aneurysmal bone cysts of the axial skeleton, found that the morbidity of CT-guided intralesional injection of 32P chromic phosphate was lower than associated morbidities with surgical or other nonsurgical treatments. The authors reported that only one minor complication occurred with 32P chromic phosphate and that all lesions were seen to have ossified on follow-up CT (average follow-up, 2 y).

Chowdhry et al reviewed the cases of aneurysmal bone cysts of the feet in 16 patients and found that the metatarsals were the most commonly affected site (44%). Surgical curettage of the lesions proved to be sufficient treatment in 11 of the 16 patients.