Nasopharyngeal carcinoma (NPC) is uncommon in the United States and in most countries of the world. Although NPC accounts for less than 1% of all cancers in Americans, it is common among Southeast Asians, especially in Chinese persons from the southern provinces of Kwantung, Kwangsi, and Fukien. Native populations in Canada, Alaska, Greenland, and Africa also have elevated rates compared with those of the rest of the world. The mean age at diagnosis is 45-55 years, and the annual rates are 23.3 cases per 100,000 men and 8.9 cases per 100,000 women. The male-to-female ratio is approximately 2-3:1. In China, the incidence varies with geography and decreases from southern to northern China, where rates are 2-3 cases per 100,000 persons per year. In America, the risk is increased in first-generation persons of Chinese descent. The rarity and obscure location of NPCs often lead to delayed diagnosis and the finding of an advanced-stage tumor at diagnosis.

Pathologic diagnosis is achieved by examining biopsy specimens from the nasopharyngeal mass. Workup includes assessment of the tumor by means of flexible or rigid endoscopic examination; documentation of the extent of the tumor and the location of neck nodes; assessment of CN function, vision, and hearing; CT or MRI of the head and neck regions; chest radiography; and blood work, including complete blood counts and serum chemistry panels, particularly renal function tests.

Creatinine clearance is determined by using 24-hour urine specimens. Any clinical or laboratory findings suggestive of distant metastasis warrant further investigation. Baseline endocrine function is established. Dental and oral hygiene evaluation is necessary before radiation therapy is started. MRI is often more helpful than CT in depicting abnormalities and in defining the extent of tumors.

Evaluation of mucosal lesions is best achieved endoscopically. Imaging findings often lead to incorrect estimates of the extent and frequency of mucosal involvement. Conversely, clinical evaluation is inadequate in tumors located entirely or almost entirely beneath the mucosa. Hence, the full staging process should include endoscopy, clinical examination of the neck, and imaging.

The role of CT is well established. CT remains the most common modality for tumor mapping and nodal staging, particularly in the regions of the globe in which nasopharyngeal carcinoma (NPC) occurs with high frequency, because access to MRI remains limited.

MRI is superior to CT in demonstrating the extent of soft tissue tumors. This is particularly relevant in tumors with extensive submucosal involvement. Generally, CT is accepted as being superior to MRI in the detection of skull base involvement; however, contrary to common belief, changes in the skull base are better identified on MRI than on CT. Although cortical erosion often is diagnosed more confidently by using CT, marrow infiltration is better determined with MRI. MRI is also more sensitive than CT in detecting perineural invasion; the obliteration of fat just external to the foramen rotundum or foramen ovale is as a good sign of early perineural infiltration.

Cervical lymphadenopathy is depicted better by using CT scans than MRIs, especially in terms of nodal necrosis and extracapsular spread. Although large amounts of data exist regarding the superiority of CT over MRI in the assessment of nodal metastasis, both modalities are adequate in routine clinical practice. Compared with MRI, CT rarely provides additional information that results in a change in treatment options.

MRI is recommended for use in staging tumor recurrences. Although MRI has limitations in separating postirradiation fibrosis from tumor recurrence, it is superior to CT in identifying submucosal infiltration, replacement of marrow in the skull base, and intracranial spread.

In many tumors that are staged with CT, their classification may be changed on MRI, especially in patients with involvement of the skull base or early CN infiltration and intracranial extension. This disparity of staging results between CT and MRI can potentially affect treatment recommendations, which may in turn pose problems in comparing treatment outcomes.

Images of nasopharyngeal carcinoma are shown below. 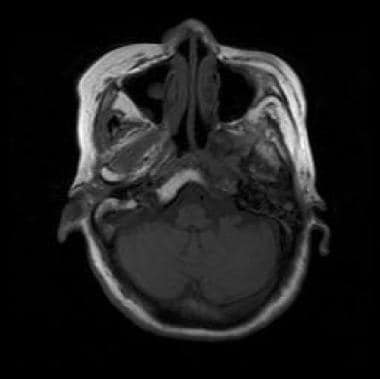 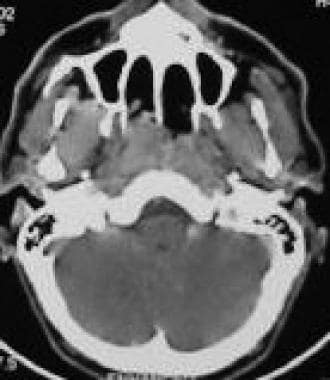 The Union Internationale Contre le Cancer (UICC) and the American Joint Committee on Cancer (AJCC) have maintained a primary tumor, regional lymph nodes, and distant metastasis (TNM) classification for NPC. However, the staging system that Ho developed is used far more frequently than the TNM system in Southeast Asia and appears to be superior.

The AJCC classification system is as follows:

T0 – No evidence of primary tumor

T1 – Tumor confined to the nasopharynx, or tumor extends to oropharynx and/or nasal cavity without parapharyngeal extension

T4 – Tumor with intracranial extension and/or involvement of cranial nerves, hypopharynx, orbit, or with extension to the infratemporal fossa/masticator space

N1 – Unilateral metastasis in lymph node(s), 6 cm or less in greatest dimension, above the supraclavicular fossa

N2 – Bilateral metastasis in lymph node(s), 6 cm or less in greatest dimension, above the supraclavicular fossa

N3 – Metastasis in a lymph node(s): N3a – greater than 6 cm in dimension; N3b – extension to the supraclavicular fossa

AJCC/UICC stages are as follows:

Survival is consistently correlated with the stage of disease. Patients with disease in early stages fare markedly better than others, with overall survival rates of 80% for stage I and 65% for stage II. Survival rates for patients with more advanced disease are 45% in stage III and 30% in stage IV. The extension of the tumor behind the styloid process or into the masticator space is common and is associated with poor survival, with 5-year relapse-free survival rates of 46% and 43%, respectively.

Because nasopharyngeal carcinoma (NPC) is a relatively rare condition in Western countries (except for those with cities with a large population of Chinese or Asian individuals), missing an early diagnosis is always a risk. A high index of suspicion is important for a correct diagnosis. The prognosis depends on the stage of the disease; therefore, missing an early disease could be detrimental. Although CT or MRI demonstrates advanced disease well, early disease is frequently not evident on the images. Endoscopic examination with biopsy (if necessary) should always supplement scanning if the patient has symptoms and signs suggestive of NPC.

The accurate delineation of the extent of the disease is crucial, as NPC has a propensity to invade the fissures of the skull base. Because the mainstay of treatment for NPC is radiotherapy, a geographic miss can result from inaccurate delineation of the target volume, especially in this modern era of radiation therapy in which 3D conformal and IMRT (image-guided irradiation) is frequently used to minimize toxicity. If only CT is available, a bone window should always be used. A coronal view is also useful. The skull base should be examined carefully for any invasion, especially in patients with headaches and CN deficits.

Posttreatment follow-up with CT or MRI should always be supplemented with endoscopic examination and biopsy if necessary. CT or MRI may not be sensitive enough to detect a recurrence of small volume.

For patient education information, see the Cancer and Tumors Center, as well as Cancer of the Mouth and Throat and Skin Cancer.