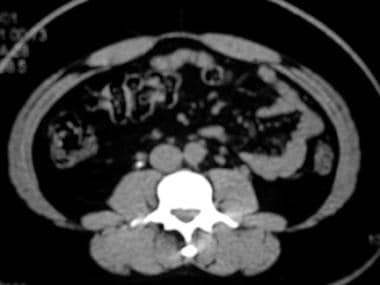 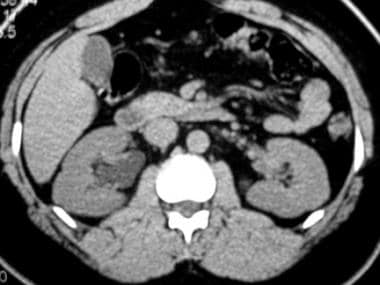 The American Urological Association recommends noncontrast CT as the preferred imaging method at initial presentation of ureteral stones. In children, the first-line imaging suggested is ultrasound, with low-dose noncontrast CT used if the initial ultrasound is negative. For pregnant women in the first trimester, ultrasound is considered the initial diagnostic modality, followed by MRI without contrast if necessary. In the second and third trimesters, ultrasound is also the first-line diagnostic modality, but low-dose noncontrast CT may be used if indicated. The European Association of Urology (EAU), American College of Radiology, and the American College of Physicians  have also published guidelines.

The advent of helical computed tomography (CT) scanning has dramatically altered the diagnostic imaging approach to patients presenting with acute flank pain. Unenhanced helical CT has both a high sensitivity of 95-98% and a high specificity of 96-100% in detecting ureteral calculi in the acute setting.
Calcified and noncalcified calculi may be identified, along with the location and size of the stone. Secondary signs of obstructive uropathy, including hydronephrosis, perinephric and periureteral stranding, as well as ureterectasis, are well demonstrated on CT.

Several reports compared unenhanced helical CT with intravenous urography (IVU), the established criterion standard in evaluating the genitourinary system.
CT has been shown to be more sensitive in detecting and characterizing ureteral calculi and at least as sensitive in demonstrating the presence of obstructive uropathy.

Additionally, CT may be performed rapidly, in approximately one third the time of an IVU study, and does not require the use of IV contrast material. The ability to diagnose noncalculus etiologies, as well as evaluate other intra-abdominal pathologies that may mimic renal colic, affords CT an invaluable advantage.

Levine et al reported the sensitivity of plain radiography in detecting ureteral calculi to be approximately 45% and recommended that noncontrast helical CT replace the kidneys, ureters, bladder (KUB) film as the initial and possibly only imaging study.
While CT appears to have replaced plain radiography and IVU in the initial evaluation of acute flank pain, these modalities remain involved in the follow-up evaluation of stone disease, as well as surgical and interventional planning.

In the evaluation of acute flank pain, ultrasonography (US) is limited primarily to pregnant patients.
While US demonstrates renal calculi, it is poor at detecting ureteral stones. Doppler sonography has been suggested as a method of indirectly determining obstruction by measuring the resistive index in renal arteries and evaluating the direction and magnitude of ureteral jets.

In nuclear medicine, the passage of radionuclide agents through the urinary tract is monitored with a gamma camera. Outlines of the kidney and ureter are generated, and a point of obstruction may be evident. More importantly, it provides physiologic information regarding the function and dynamics of the urinary system. The technique of choice in the evaluation of obstruction is diuresis renography, which is performed with technetium-99m-labeled mercaptoacetyltriglycine (99mTc-MAG3) in most centers.

Diuresis renography is not performed routinely in acute ureteral colic, as CT usually provides the necessary information. However, it may be important in documenting return of renal function in patients for whom urologic intervention is required. Renography with Lasix is useful in determining whether pelvocalyceal system dilatation, often observed on a screening study such as US, is obstructive or nonobstructive in nature.

Ultrafast T1- and T2-weighted techniques such as spoiled gradient echo (T1) and single-shot fast spin echo (T2) have been reported to be highly sensitive and specific for determining the presence of both ureteral calculi and acute obstructive uropathy. However, as with US, in magnetic resonance urography (MRU), the degree of dilatation must be sufficient to use the native urine as a contrast agent.

An inherent limitation of unenhanced helical CT is in providing functional information. The severity of obstruction may be inferred by the presence of perinephric stranding, which is believed to result from forniceal rupture or inflammation in the perirenal fat from high calyceal pressures. The absence of this finding, as well as the other signs of obstruction, does not exclude a significant obstruction.

Performing a contrast-enhanced CT may provide greater physiologic information by demonstrating an obstructive nephrogram and pyelosinus extravasation of contrast material. An important consideration in choosing this modality is the significant radiation dose to the patient, compared to an intravenous pyelogram (IVP). This disadvantage restricts its use, especially in pregnant and pediatric patients.

It has been reported that in patients with ureteral calculi, stone size alone determines initial treatment of patients, with no correlation found between severity of obstruction as suggested by CT and the decision to treat conservatively or perform an intervention. The authors therefore suggest that nonenhanced helical CT is adequate for the initial diagnosis and treatment of patients with stone disease.

Plain radiography and IVU have similar drawbacks, including lower sensitivity because of superimposition of bone and other calcified structures and obscuring bowel pattern. They are limited by stone size (< 4 mm) and patient habitus. IVU, although providing both anatomic and physiologic information, has the added disadvantage of being time consuming and dependent on administration of contrast material, with its potential complications. It is also dependent on renal function, as the use of the test is greatly diminished when the serum creatinine concentration is elevated when the patient has both intrinsic renal disease and an acute obstruction.

US evaluates the ureters and detects calculi poorly. The accuracy of US in diagnosing obstruction in the setting of acute flank pain was found to be approximately 66%. This is directly related to the anatomic nature of the examination, which relies mainly on the presence of hydronephrosis to make the diagnosis. In early obstruction, up to 36 hours after onset, no dilatation of the collecting system may be present, and a false-negative study may result.

Doppler sonography is operator dependent and time consuming. Determination of ureteral jets and the resistive index has not been adopted into widespread clinical use for acute obstruction because of technical limitations and questionable accuracy. Most pathologic processes decrease renal perfusion and thus increase the resistive index (RI).

Diuresis renography, a physiologically driven study, depends on renal function. If marked impairment of bilateral renal function is present, an indeterminate study results. In patients who are dehydrated, the expected response to the diuretic may not be evident, leading to an inconclusive study.

The use of MRU in the acute setting of flank pain also is limited. Studies comparing MRU to CT and IVU reveal that MRU misses small calculi and mild dilatation. In addition, it is time consuming and expensive and is limited to special situations, such as pregnant patients.

Calculi may be missed and signs of obstruction may not be evident. Clinical and imaging follow-up care is warranted to prevent the loss of kidney function. The interpreting radiologist is responsible for all pathologic entities present on the imaging study, whether or not they may be the source of the present symptoms.

The diagnostic imaging approach to these patients begins with an abdominal US to demonstrate the presence of hydronephrosis. Remember that mild hydroureteronephrosis is observed in normal pregnant patients. Transvaginal and transrectal US may be used to detect distal ureteral calculi. Doppler sonography plays an important role, using the RI and ureteral jets to diagnose obstruction.

Where US does not provide a diagnosis, MRU or IVU may be the next step in imaging. MRU, if available, is preferred, as no ionizing radiation exposure occurs. One can make the diagnosis of an obstructing calculus by the presence of a filling defect with associated perinephric or periureteral edema.

Alternatively, an extremely limited IVU may provide the necessary information. The limited IVU consists of a preliminary film followed by a single postcontrast exposure to demonstrate the point and cause of obstruction. However, the gravid uterus with the fetus can obscure a nonpregnancy cause of hydronephrosis.