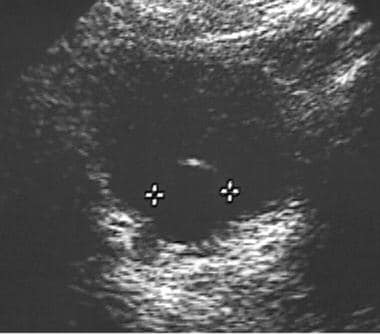 Transverse sonogram of the pelvis depicts the bladder with a ureterocele. The cyst within a cyst is a pathognomonic radiologic sign of ureterocele. 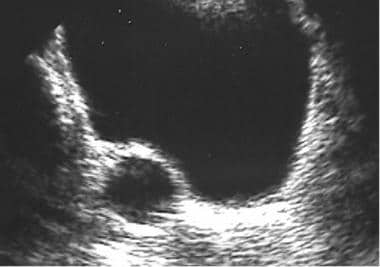 Transverse sonogram of the pelvis depicts the bladder with a submucosal ureterocele. 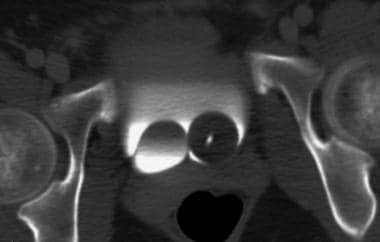 Delayed axial CT scan shows a right ureterocele within the bladder with contrast material filling the ureterocele. The lucency on the left represents a Foley catheter.

Ureteroceles are most commonly found in association with complete ureteral duplication (80%),
but they can also be seen at the terminus of a single system. The association of a fluid-filled structure within the bladder leading to an ectopic dilated ureter and a hydronephrotic upper pole of a kidney is the sine qua non of a ureterocele associated with a duplicated system. The function of the upper pole segment is variable, depending on the relative degree of obstruction caused by the ureterocele.

A ureterocele associated with the upper-pole moiety is located medially and inferiorly to the lower-pole ureter, inserting in a more superolateral location (Weigert-Meyer rule). Intravesical single-system ureteroceles are typically associated with good renal function (>80% with excretory function), whereas extravesical single-system ureteroceles are seen with poor renal function (< 30% with excretory function), dysplastic kidneys, and bladder outlet obstruction.

Increasingly, ureteroceles are detected on antenatal sonograms. Initial findings often include hydronephrosis and a fluid-filled structure within the bladder. Antenatal findings must be correlated with results of postnatal studies, including ultrasonography, cystography, and functional studies. Vesicoureteral reflux (VUR) is present in 50% of ipsilateral lower-pole moieties in duplex systems and present in 10-25% of contralateral moieties in single and duplex systems.

Sonography should be performed with the bladder empty and with it filled to eliminate nonvisualization of ureteroceles due to either compression of the bladder or the ureterocele. Ultrasonography is the most sensitive test and often the only radiologic evaluation required for the diagnosis of ureteroceles.

Functional studies of the renal system include intravenous pyelography, computed tomography (CT) scanning, and renal scanning. These contrast-enhanced studies help to delineate the relevant renal anatomy, especially with regard to potential renal duplications. They are also useful in evaluating the differential renal function. Contrast-enhanced studies help to identify ureteroceles within the bladder as a thin, nonenhancing rim around contrast enhancement within the ureterocele.

These functional studies often add supplemental information that is useful in the treatment of patients with ureteroceles, but they are typically not used as first-line imaging modalities for the diagnosis of suspected ureteroceles.

CT scans, intravenous pyelograms, and renal scans are less sensitive for ureteroceles, but they help to more clearly delineate the functional anatomy of the kidneys.